The central bank said on Thursday for 2019, domestic demand will remain the key driver of growth though it was cautious about moderating global growth and its fallout on the local economy.

THE sentiment on the Malaysian economy may not be so positive, but it is far from entering a recession.

In the words of Deputy International Trade and Industry Minister Ong Kian Ming, “a recession is nowhere on the horizon for the Malaysian economy”.

While the World Bank has lowered the country’s gross domestic product (GDP) growth forecast to 4.7% in 2019, it remains higher than the average estimated growth of 4.2% for the emerging market and developing countries.

Malaysian manufacturers also remain upbeat on growth prospects, looking into 2019. Despite the jitters caused by the Nikkei Purchasing Managers’ Index hitting its record low for December 2018, about 17% of manufacturers expect output to be higher this year.

In comparison, Nikkei says only 4% of the firms surveyed predict lower volumes.

Not only that, the fund-raising activities in the domestic debt market will likely be sustained above the RM100bil-mark.

“We forecast a gross private debt securities supply of RM100bil in 2019 as compared to RM104bil last year. The use of government-guaranteed bonds will continue, given fiscal constraints and the need to fund major infrastructure projects.

“Refinancing could also drive issuances, given higher bond maturities in 2019. The relaxation of rules on retail access to the bond market may also open up a new segment of demand and supply,” says the research house. 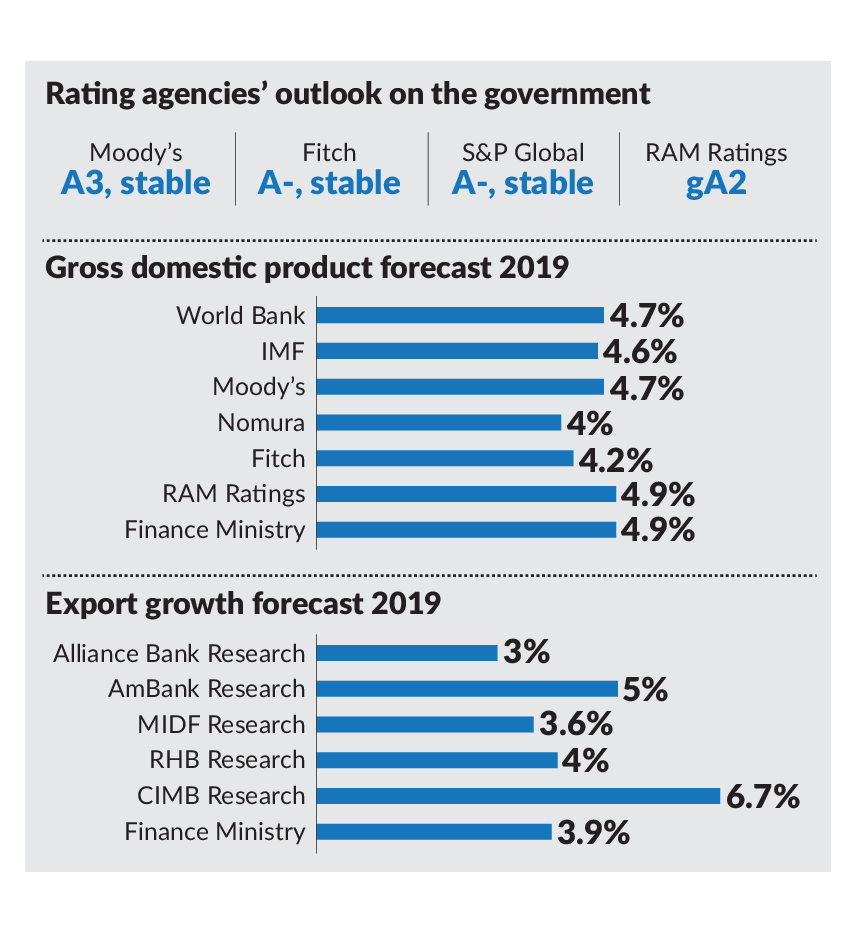 Besides that, Malaysia’s current account surplus of the balance of payments is expected to widen in 2019, according to RHB Research Institute analyst Vincent Loo.

“This is on the back of lower imports of goods and services, following the deferment of infrastructure projects,” states Loo. For context, the Finance Ministry expects Malaysia to achieve a current account surplus within the range of 2% to 3% in 2019.

Private-sector expenditure, particularly household spending, is anticipated to be the key driver of economic growth amid the moderating economic growth.

In late November 2018, Bloomberg ranked Malaysia first on its top emerging market list on the back of its current account surplus, relatively stable economic growth outlook and valuations.

The country has beaten Russia and China and is ranked much higher than other regional economies such as Thailand and Indonesia. This raises confidence on the domestic economy, despite signs of a growth slowdown.

The oil and gas (O&G) sector, which is expected to recover this year, will also be an important catalyst for the economy.

With more O&G activities expected from national oil producer Petroliam Nasional Bhd and higher Brent crude oil prices this year, local O&G players stand to benefit significantly. This will raise confidence in the industry and could spur further capital expenditure by the companies.

Maybank IB Research projects Brent crude oil to average at US$65 per barrel in 2019.

Higher crude oil prices also mean that the government has less to worry about. It will not be forced to recalibrate Budget 2019, or compromise and accept a budget deficit level higher than the Finance Ministry’s expected 3.4% for this year.

Meanwhile, the recent news regarding Malaysia’s issuance of 200-billion-yen (RM7.6bil) Samurai bonds comes as a positive development for the country’s finances.

The 10-year Samurai bonds, which will be guaranteed by the Japanese government, will be issued at a cheap cost at an indicative coupon rate of 0.65%.

The amount raised from the bond issuance will be utilised to pay off old debts, which were pegged at a much higher interest rate of up to 7%.

Prime Minister Tun Dr Mahathir Mohamad had said earlier that the Samurai bond would reduce the country’s burden to service the loan.

Recently, Bloomberg also pointed out that “the country’s first Samurai bond sale in three decades could lift the ringgit in a similar way to the boost the rupiah got after Indonesia’s recent US$3bil bond issuance”.

“Apart from the benefit of the fund-raising itself, Malaysia will also be showing debt investors that the threat of a sovereign credit downgrade - which emerged after last year’s surprise election - has receded,” it says.

While Malaysia continues to enjoy pockets of positivity in 2019, negative news about the economy is undeniably overwhelming.

The ongoing US-China trade war, the expected synchronised slowdown in the global economy – across both advanced and developing economies – as well as foreign fund outflows from the emerging markets due to the monetary tightening in several developed countries add to Malaysia’s long list of challenges this year.

Working Malaysians will face the brunt of the slower economic expansion, as the sentiment of local employers has turned cautious.

Malaysian Employers Federation executive director Datuk Shamsuddin Bardan warns that salary increments in 2019 could be at multi-year lows for both executive and non-executive workers.

Some workers could also take a pay cut or risk losing their jobs. 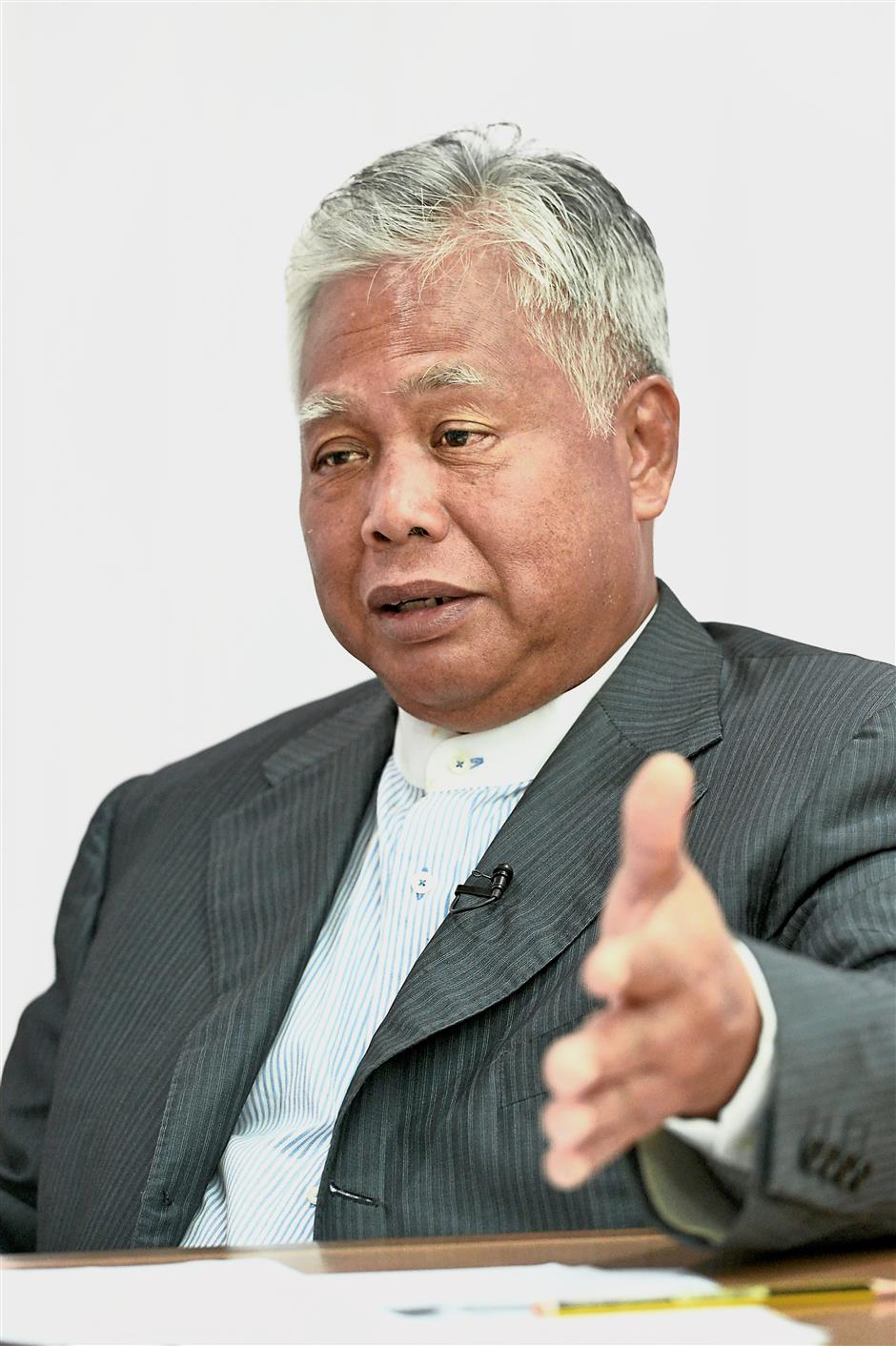 “Employers are cautious on their business performance and are taking a wait-and-see approach. This weak sentiment started even before the 14th general election.

“Job creation in the local market will surely not be encouraging till 2020,” he says.

Shamsuddin urges the government to introduce incentives to encourage employers to retain their workers in these trying times.

He describes the government’s efforts to spur job creation as “not enough”.

“We expect it to maintain at the current level, considering the moderation in economic growth.

“As of October 2018, the Statistics Department indicated stable employment conditions, registering the unemployment rate at 3.3%. Besides, in its 2Q18 domestic employment statistics, we observed that there are still a high amount of vacancies, especially in the manufacturing sector (54% of 200,000 vacancies),” he says.

On trade, Ong tells StarBizweek that lower export and trade growth is likely in 2019.

“The ministry has not made its internal projections on what our trade growth expectations are for 2019.

“But with global economic uncertainties, as well as rising protectionist pressures in developed countries, we can expect trade growth to moderate somewhat,” he says.

Based on RHB Research Institute’s latest projection, Malaysia’s export growth will slow further to 4% in 2019 from the 5.7% estimated for 2018, on account of a weaker global trade outlook and slowdown in demand from China.

On the trade performance between January and November 2018, however, Ong says the figures look promising.

In order to spur trade growth and help Malaysian exporters, Ong says that the International Trade and Industry Ministry (Miti) is currently reviewing its international trade strategy for 2019 and beyond.

A preliminary list of 29 strategies have been identified and these strategies are developed for 14 of Malaysia’s key trading markets. The strategies will be rolled out throughout 2019.

“Some of these strategies include reviewing our current free trade agreements to reduce non-tariff measures, enhancing the use of various e-commerce platforms (which would be helpful for our small and medium enterprises) and expanding our market share in the halal segment.

“Miti will be announcing these strategies at appropriate times throughout 2019 in conjunction with our agencies and relevant stakeholders,” he says.

The local property market is also saddled with many challenges, with huge unsold units being the major problem in 2019.

RHB Research Institute says property sales are expected to remain flat in 2019, with most developers either lowering or maintaining their sales targets.

This figure marks a steep decline from the 870,442 incoming residential supply in 3Q15.

A property agent tells StarBizWeek that many property developers are struggling.

“Prices have gone too high, causing buyers to be unable to purchase homes. Unless the property developers take a cut in their profit margins or sell at a loss, it will be difficult to dispose the unsold stocks,” he says.

Meanwhile, Malaysia’s retail industry could also take a hit due to the moderation in overall economic growth.

According to Retail Group Malaysia managing director Tan Hai Hsin, all retail sub-sectors and retail sales will be affected on the back of the economic slowdown.

“Retail Group Malaysia is projecting a 4.5% growth rate in retail sales for Malaysia in 2019. Consumer spending patterns in this new year are highly dependent on the economic performance and cost of living during the year.

“No particular retail sub-sector will be the key driver of the retail industry in 2019,” he says.

“During an economic slowdown, the closure rate of small retail stores is usually higher as compared to national chain retailers. This is due mainly to their limited resources (including capital and purchasing power from suppliers).

It is safe to say that small businesses will not be the only ones affected due to the current challenging business environment.

He says that plantation, manufacturing and technology companies could export less this year due to lower commodity prices and declining export numbers. This could affect their earnings. 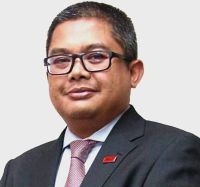 Room for improvement: Mohd Redza says there is still hope for Corporate Malaysia to improve.

“However, consumer and consumables (gloves and aviation) players will likely see favourable numbers, owing to strong retail sales as well as the higher number of passengers carried by AIRASIA

, supported by the moderating cost of fuel.

“The depreciation of the ringgit for most of the fourth quarter will be good for export players with high domestic raw material content,” he says.

Softer corporate earnings prospects are not unique to Malaysia alone.

On Jan 11, Bloomberg reported that more than half a dozen corporate giants in the US have either lowered their profit forecast, announced massive job cuts or pulled the plug on plans in the face of market volatility.

“Assuming a solution is found during the trade war negotiations, an accommodative monetary policy stance in the US and a recovery in commodity prices, we can expect 2019 to see earnings growth.

“This is premised on their impact on the ringgit’s appreciation. We expect the ringgit to appreciate to the RM4.00 level by end-2019.

“The higher commodity prices will significantly reduce the pressure on government coffers. A much clearer government direction as Budget 2019 hits the ground will also be useful,” he says.

A few days go, Nomura Research downgraded the outlook of the Malaysian equity market to “underweight” from “neutral” previously.

The international brokerage cited poor macro/micro fundamentals and a lack of major expansionary reforms so far as reasons for the downgrade in its recommendation.

“With the new government more than six months in power already, while there have been efforts to fix fiscal leakages, there has not been a significant reform push which can potentially lead to expansionary economic activity,” it explained.

In response to Nomura Research’s claims that Malaysia’s fiscal deficit for 2018 would deteriorate to 3.9% – higher than the official guidance of 3.7% – Finance Minister Lim Guan Eng slammed the report as “untrue”.

When asked whether a peaceful ending to the US-China trade war will raise the country’s GDP projection, Alliance’s Manokaran says it is unlikely.

“We are of the view that even if trade dispute negotiations end well between the US and China, global growth moderation is here to stay, especially in major economies such as the United States, China and the eurozone.

“Particularly, we are more concerned about the slowdown in China as our main exports – the electronics and electrical sector (particularly semiconductor products) – are with China.

“We have already factored in the tendency for a global economic slowdown in our 2019 GDP forecast, thus maintaining it at 4.5%, lower than the Bloomberg consensus of 4.6%,” he says.