We sincerely need the peoples

MELAKA: Malaysians have been urged to consume palm oil in many forms in their daily lives as a patriotic move to help shore up the commodity’s flagging price, says Deputy Primary Industries Minister Shamsul Iskandar Mohd Akin.

He said the ministry would continue to aggressively promote the use of palm oil among the people apart from expanding existing markets and exploring new ones.

“We are faced with a huge challenge of pushing up prices of several commodities including palm oil as the commodity industry is one of the largest revenue earner for the country and it’s current status will affect smallholders’ income.

“Hence, we sincerely need the peoples’ support, irrespective of income levels, in stepping up the use of palm oil which will ensure the commodity’s continued growth and development in terms of demand, supply and price,” he told reporters after officiating a New Year programme at a home for the mentally challenged here today.

Shamsul Iskandar said the government, via his ministry, would continue to engage with stakeholders at all levels including smallholders to jointly implement effective measures to push up the price of the edible oil.

One such example is the use of domestic palm oil to fuel the Biodiesel B10 programme, which kicked off on Dec 1, aimed at increasing consumption and reducing excessive stocks.

He also said government-linked companies can also assist by focusing on promoting palm oil in the manufacture of their products instead of using other oils as the golden oil is highly nutritional especially its antioxidant properties that can help prevent the growth of cancer cells. — Bernama 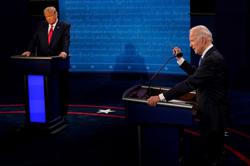