plans to complete housing projects with a gross development value (GDV) of RM993mil here in three to five years.

On completion, there will be 2,587 units in Klebang Putra with a GDV of RM452mil while Meru Perdana will comprise 1,915 units worth RM541mil.

“To date 1,677 units with a GDV of RM215mil have been developed in Klebang Putra and handed over to buyers.

“As for the Meru Perdana 1 and 2 projects, we have developed 1,571 units valued at RM399mil so far,” he told reporters after the key handing-over ceremony in Klebang Putra yesterday.

Mohanachandran said the Klebang Putra and Meru Perdana projects began in 2003 and 2009 respectively, on about 182 ha.

He said construction of additional housing units would be based on demand, in addition to using the approach of developing in stages until the target was reached. — Bernama 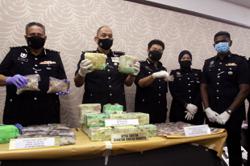