(MAHB) expects the passenger movement at the Kuala Lumpur International Airport's (KLIA) main terminal and klia2 to surge by 12 per cent and 21 per cent, respectively, this month, which is considered a super-peak travel period.

The airport operator projected a total of 6.9 million passengers travelling via KLIA during this school holidays and Christmas festive season.

The super-peak period at the KLIA's main terminal, which is likely to last until Dec 23, 2018, is due to additional flights scheduled by airlines, MAHB said in a statement today.

As for the second terminal, klia2, it said the peak travel period would remain until end of the month.

This include the kerbside, check-in counters, security check points before boarding, terminal transfer system, trolleys and facilities, and baggage reclaim areas, he said.

“All touchpoints will be put on high alert to ensure that the service level is at its optimum and congestions are minimised,” he added. 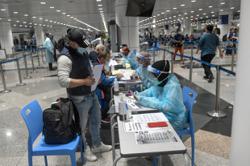