Main focus: DRB-Hicom says its key focus will be to turn around Proton, starting with the roll-out of the Proton X70 SUV, slated for launch next month.

suffered a net loss of RM11.42mil for its second quarter ended Sept 30, 2018, compared with a net profit of RM742.60mil in the previous corresponding period, mainly due to lower performance of certain companies in the automotive and services sectors.

In a filing with Bursa Malaysia yesterday, the company said profits in the previous corresponding period ended Sept 30, 2017 included research and development reimbursement grant of RM1.10bil, net of Proton restructuring costs of RM325.47mil.

Revenue in the second quarter dropped to RM3.18bil from RM3.24bil a year earlier.

For the six-months period ended Sept 30, 2018, DRB-Hicom reported a net loss of RM78.02mil compared with a net profit of RM559.80mil in the previous corresponding period, while revenue fell to RM5.84bil compared with RM6.37bil a year earlier.

DRB-Hicom said earnings during the period was affected mainly due to lower sales recorded by its automotive and property divisions.

For its automotive division, the company said the decrease was largely due to sales revenue foregone following the disposal of Lotus and also lower sales of vehicles by Proton.

“The services sector recorded higher revenue from banking and waste management businesses,” said DRB-Hicom, adding that the earnings reduction in its property division was mainly due to lower revenue recognised from construction related projects.

Commenting on its prospects, DRB-Hicom said its key focus would be to turn around Proton, starting with the roll-out of the Proton X70 sports utility vehicle (SUV) which is slated for launch in December 2018.

“The new SUV will feature advanced technologies and safety capabilities as well as luxury-oriented comfort and latest infotainment systems which are key to the brand revival effort. This revival is further augmented by the upgrading of Proton’s distribution outlets aimed towards providing better and more efficient customer service.

The launch of the Proton X70, together with other product launches by marques within the group is expected to improve the overall sales performance of the automotive sector,” it said.

DRB-Hicom also said that it had on Oct 15, 2018 obtained shareholders’ approval to divest its solid waste management business and nonindustrial property assets.

“These proposed disposals are pending fulfillment of other conditions precedent. DRB-Hicom’s execution of its growth strategy to achieve long term sustainability will continue despite the volatility and uncertainties in the domestic and external environment.

“Given this scenario, the group will continue to remain vigilant and exercise prudent cost management across its operations.” 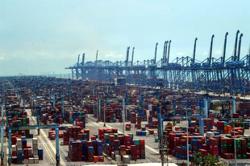