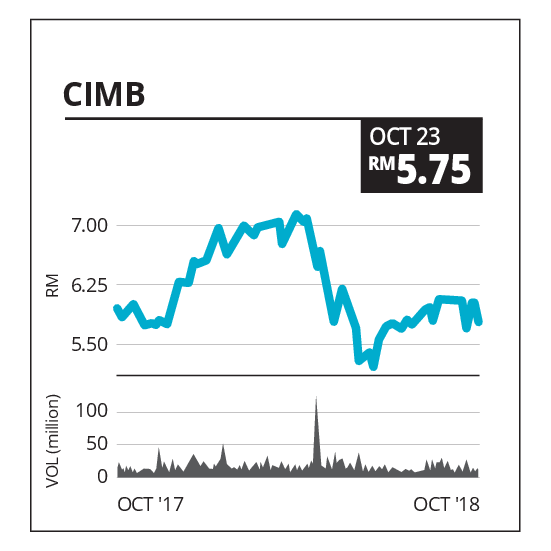 CIMB management expects the operating environment for PT Bank CIMB Niaga Tbk to remain challenging for the next six to nine months and this would make achieving the 2018 ROE target of 10.5% a challenge.

CIMB Niaga’s loans are expected to grow at low single-digit and would likely remain so in the first half of 2019 (1H19).

Net interest margin (NIM) remains under pressure on the 150bps cut in interest rate between May and September. The combination of weak loan growth and narrower NIM at CIMB Niaga would likely see CIMB’s net interest income (NII) fall short of expectations.

These will, however, be offset by the stronger increase in operating expenses.

For management, the key positive at CIMB Thai is the bank’s much improved asset quality.

Momentum in CIMB’s Malaysia operations have recovered from the sharp slowdown in May-June. That said, corporates remain cautious ahead of the Budget 2019 on Nov 2.

For CIMB’s management, they believe that Malaysian loan book would reach the 8% growth target for 2018 while NIM is expected to be stable.

They are also comfortable with CET-1 ratio at 12%, to be achieved by year-end though they still aim to raise CET-1 to 13% to match regional peers. This will be achieved via organic means.

CIMB’s management acknowledged that achieving its 2018 ROE target of 10.5% will be a challenge, given prospects of lower than-expected NII and wholesale banking income.

Based on core net profit, analysts forecast FY18 ROE at 9.7%.

“CIMB’s share price has underperformed the market on concerns that its earnings would be impacted by the challenging operating environment in Indonesia,” said analysts.

With the stock currently trading at 1x 12-month forward consensus P/BV, which is at -1SD from the historical mean, analysts believe much of the negatives have been priced in. 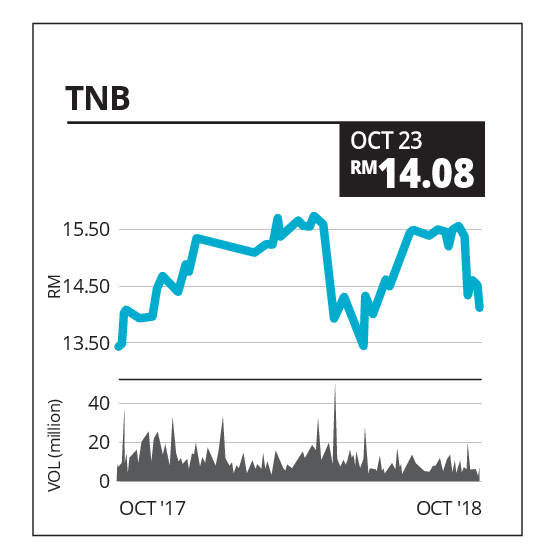 THE imposition of a tariff surcharge in 2H18 (the first to be borne by consumers) has removed a major overhang over the integrity of the pass-through mechanism.

The regulator has announced that the present 1.52sen per kWh tariff rebate in Peninsular Malaysia will be discontinued, and a 1.35sen per kWh tariff surcharge (amounting to RM698mil) to be imposed for the second half (2H18).

Domestic users (households using >300kWh monthly) get some relief as the surcharge for this segment would be funded by the Electricity Industry Fund. Industrial and commercial users meanwhile are not subsidised.

It would send out a positive signal as this is the first time since the implementation of IBR (in 2014) that consumers would have to bear a tariff surcharge (recall the 0.28sen per kWh surcharge in 1H18 was funded entirely by the Electricity Industry Fund).

“Longer-term, we do not rule out Tenaga’s valuation multiple possibly expanding as doubts over the pass-through mechanism fully dissipates,” analysts said.

This announcement would alleviate recent concerns over the integrity of the pass-through mechanism. “For the coming quarter, we expect an earnings recovery due to normalisation of content cost and adex post-World Cup and tax holiday.”

To recap, Astro is currently facing the risk of regulatory pressure with the new government planning to liberalise and promote competition in the pay-TV segment (as mentioned in the PH manifesto and mid-term review of 11th Malaysia Plan) through distribution of more broadcasting licences to new players.

While it may be challenging for new players to survive in the long term given the capex-intensive nature of the industry, heavy investment required for content cost and the exclusivity of broadcasting rights, a foreign convergence player which has experience in telecommunication and media industries could still post an unprecedented threat to the local pay-TV incumbent.

Analysts view that the merger with Maxis would be able to address this issue and enable Astro to compete effectively as a convergence player, offering disparate mobile, fixed broadband and pay-TV services in a single package.

The potential merger may act as a re-rating catalyst and analysts conclude that, “It is favourable to Astro as the shares will mostly likely be priced at a premium in the deal and the combined entity will benefit from earnings accretion being a convergence player.”

Despite recording flat revenue, Astro’s normalised net profit slumped by 80.8% year-on-year (y-o-y) to RM46.6mil in 2QFY19, mainly hit by the jump in content cost for 2018 FIFA World Cup broadcasting rights and worsened by the weaker ringgit, the weaker-than-expected adex due to the reduced need to advertise during the tax holiday period (June-August 2018) and the higher finance cost.

“Post 2018 FIFA World Cup and tax holiday, however, we expect both the exceptionally high content cost and weak adex to normalise and hence the group’s results to recover in the subsequent quarter,” Public Investment Bank said.

“At the current level, we think that the recent sell down of the shares is overdone,” analysts opined in line with the 2QFY19 results.

Analysts say based on their technical idea (dated Oct 21), Astro is potentially forming a double bottom chart pattern and they anticipate a continuous improvement in both momentum and trend in near term that may lead price higher to subsequent resistance level of RM1.53.

G-Sparx targets to offer 1500MW of self-generation for solar PV investment by 2025. This compares to the current 380MW installations.

The financing scheme essentially offers a zero upfront capex solution for solar PV installation and this is to encourage premise owners, particularly residential, to install solar panels as part of the drive to increase RE contribution to 20% by 2030 from 2% currently.

“Depending on the actual allowable rate of return on the investments, this looks positive for Tenaga,” analysts said.

The move is part of the updated Net Energy Metering (NEM) programme which introduces a new solar leasing mechanism under a widened supply agreement for RE (SARE).

The three key elements of the leasing mechanism are tariff which is to be agreed upon with utility company, in this case, TNB; capex, which in this case means G-Sparx that is the company investing in the solar assets and electricity cost savings for the consumer.

The investor (in this case G-Sparx) will earn a return on the investment into the solar panels while the customer will enjoy some saving on electricity charges according to NEM principles.

Payment of monthly leasing fee (under G-Sparx) is combined in the monthly electricity bills.

The implications from higher consumer rebates are if excess capacity is sold back to TNB (as the single buyer) at a higher rate, this essentially means additional electricity sourcing cost to TNB and consumers can generate electricity themselves.

Based on IBR principles, both these factors are likely to be reflected in tariffs i.e. cost of sourcing and generating electricity and demand fluctuations given the revenue cap model under RP2 which limits upside but also protects downside for TNB

Analysts maintain TNB as the top pick and “buy” with a TP of RM16.90 with key catalysts of solid dividend yields (4.6%), peaking generation capex which suggests room for dividend upside, possible monetisation of backbone fibre asset via partners and potential beneficiary of updated NEM.