David Jarnell, Senior Vice President and Head of Research at Jones Lang Wootton, has over 25 years working experience in the property market and has been based in Kuala Lumpur since 1996.

There is now a growing trend of developers deferring completion dates

ACCORDING to Jones Lang Wootton’s in-house research, a total of 13.332 million sq ft of office space, in the form of 33 office buildings, is scheduled to be completed in the Klang Valley over the next 30 months, and almost half of this, 6.586 million sq ft is “scheduled” for completion in the 2H18.

David Jarnell, senior vice-president and head of research says, there is however already a growing trend of developers deferring completion dates and based on the historical trends set in oversupplied markets, it is anticipated that 50% to 60% of this space, could be deferred to 2019 or beyond.

There is no doubt that the developers of the speculatively built recently completed vacant office space will have to tolerate waiting for tenants to occupy their buildings. There could however be some relief as some office occupiers are seeking “flights of opportunities” to newer premises with better amenities and higher quality specifications, at similar rentals to their existing buildings. This could, however, lead to more vacant secondary office space, particularly those that have not been upgraded or repositioned to meet the needs of modern businesses. 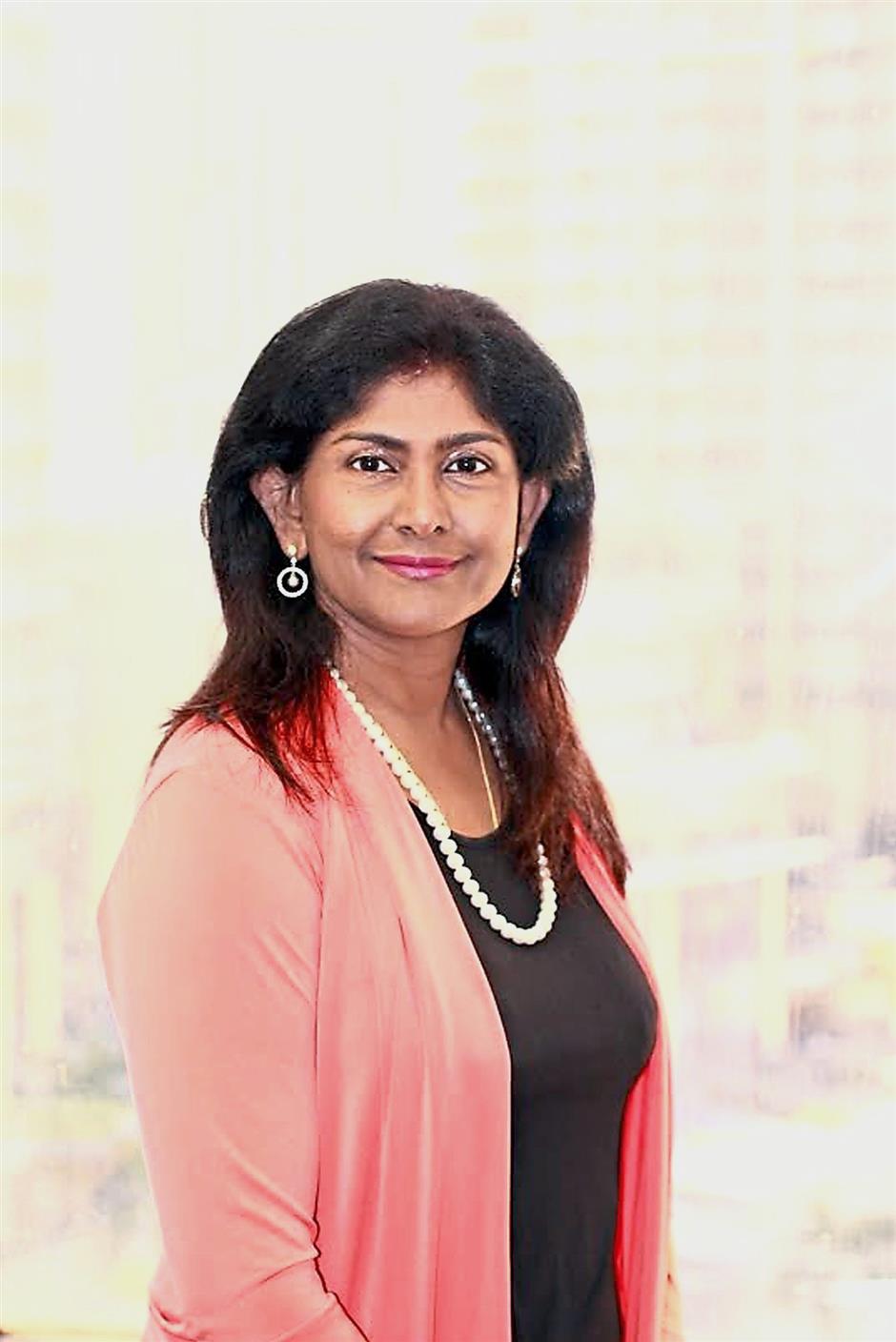 David observes that on-going highways and rail projects, which have been completed or are still under construction have “opened up” the Klang Valley.

With better connectivity and accessibility, developers have seen the potential of building offices in both established and growing decentralised commercial areas and this has contributed to the oversupply scenario. Some of the new office buildings, which were completed over the last few years, are either still vacant or relatively poorly occupied and may continue to take more time to become occupied, probably more than three to four years to achieve acceptable occupancy rates.

Malathi Thevendran, executive director at Jones Lang Wootton states, that during the 2012 to 2014 period, 14.45 million sq ft of space was completed and the occupancy rates of these buildings ranged between 25% and 40% (average of 26%) within one year of their completion date and are now (2Q18) averaging between 76% and 86%. 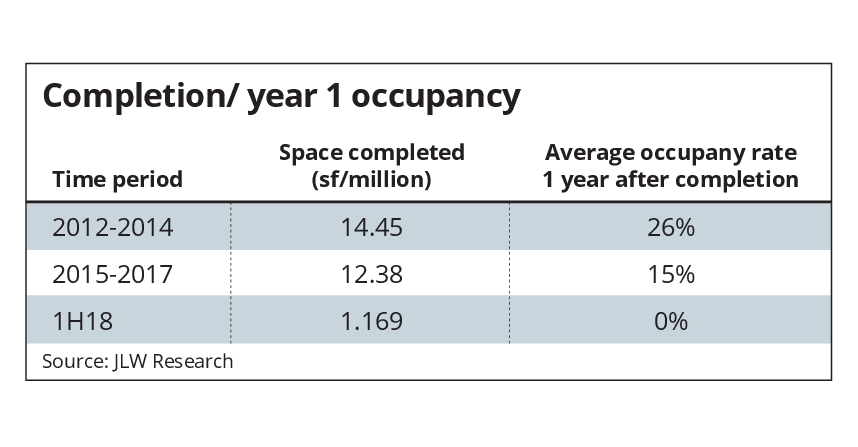 The graph below shows the progressive annual take up of office space in newly completed buildings by year (first to seventh year after completion) between 2012 and 2017. There was a negative net take up for buildings completed in 2013 during 2017, as a few tenants either downsized or vacated.

According to Malathi, business conditions remain lethargic as the market is challenged by weakened demand, however the overhang can effectively be reduced if the economy and the government’s Economic Transformation Programme and its policies are able to generate more economic activities, create jobs and consequently more office space demand.

Furthermore, if the government investment promotion agency, InvestKL, can attract more larger space occupying multinational companies (MNCs) to set up regional headquarters, this would also help alleviate the oversupply. During the 2011 to 2017 period, InvestKL reportedly attracted 73 MNCs into Greater Kuala Lumpur, the majority of which are from the US. According to the InvestKl Performance Report 2017, these 73 companies (the top five represented sectors being “business services”, “engineering”, “industrial products”, “oil and gas” and “global commodities traders”) have taken up about 700,000 sq ft (average of 9,590 sq ft per company), and even if the space taken up is all pure office accommodation, which is unlikely, this is only a small fraction of the millions of square feet of office space lying vacant. 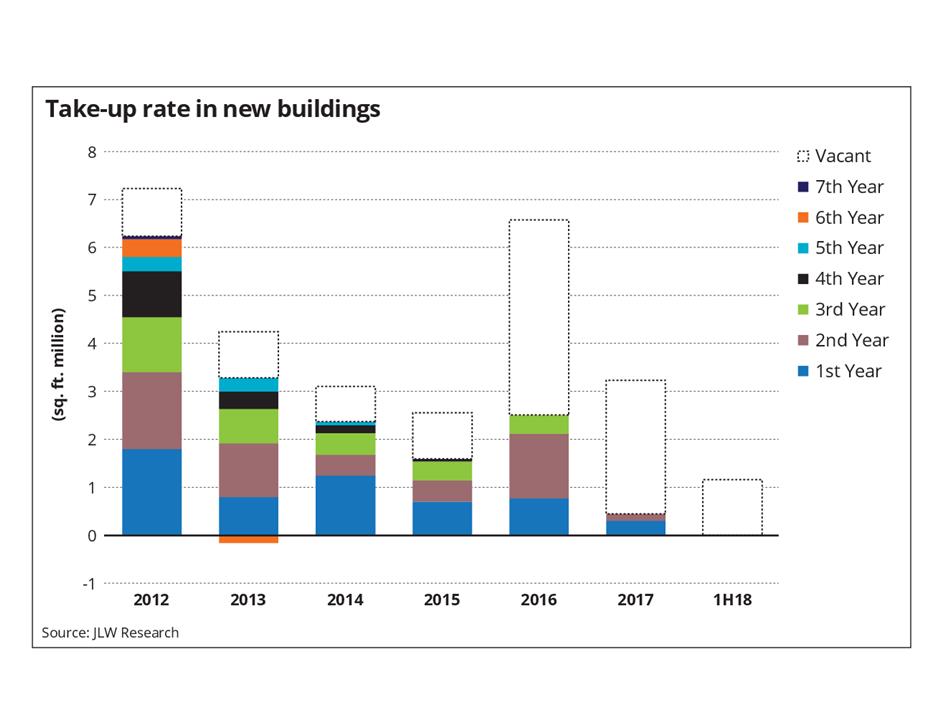 Although Malaysia has many attractive points for MNCs and bodies such as Invest KL, Miti and Mida carryout a good and important role, the country often loses out to rival countries such as Singapore, for example, which is well renowned as a financial centre and regional hub.

On a general note, David questions whether Malaysia could be more competitive and better positioned to attract more MNCs than it has. He believes there is no doubt that the country has developed with verve over the past few decades with many positive features, such as:

> There is cultural adaptability

However, the country is still not as well known or recognised globally, as other Asian countries such as Hong Kong and Singapore.

He also states that there appears to be limited solutions and any possibility of a short term office sector recovery looks frail. Developers are aware of this and are very wary of flooding the market with commercial space with some deferring completion dates, paring down plans and even shelving future projects.

Currently, it would be prudent for any developer to reduce or avoid speculative construction activity with works commencing only when a good level of pre-leasing commitments from potential tenants have been secured.

Having been through three property market cycles in Malaysia, Malathi adds that some developers may have fallen short by not paying attention to historic trends and patterns, changes to businesses’ needs, current and future market trends.

Moreover, developers who engage the right consultants to carryout diligent market research, assess the critical success factors and benchmark with the competition from comparable developments, to position their products correctly in the market, will be able to make the most of the opportunities which lie in a consolidated market.

She concludes that new projects with an advantageous location and connectivity, good design, layout and features at competitive rentals and delivered by reliable developers will attract tenants, particularly when the market starts to recover.

David Jarnell is senior vice-president and head of research and Malathi Thevendran is executive director (research and consultancy) at Jones Lang Wootton (consulting@jlwmalaysia.com)