You might think a celebrity CEO smoking weed on a live show just after a class-action lawsuit was filed against his firm is the sort of thing a financial columnist dreams about. And you’d be right. But it also presents something of a conundrum: What can sensibly be written about Elon Musk at this point that doesn’t come off as a parody?

Throw in the whiskey and that joint and, by the end, we were deep into something approximating a televised therapy session and one of those deep-in-the-night college “debates” that are, for most of us, a mercifully hazy memory.

“Earth is a giant ball of lava with a thin crust on the top, which we think of as, like, the surface” sounds like something I just made up to poke fun, but was actually said by the man running a US$48bil enterprise deemed by many to be seriously undervalued.

It may not bear repeating, but it must be repeated anyway: This isn’t normal. You know this already, of course; hence the columnist’s conundrum (cue those tiny violins).

At this point, you have either made your peace with it and want to let Tesla’s genius just be himself; or you’ve been wondering how on Earth (that giant, lightly crusted ball of lava) the stock price has defied the onslaught of missed targets, tantrums, the tent, Pedo-Gate, and the take-private-yeah?-nah fiasco.

As with America’s president, Musk’s committed base is formidable and apparently unshockable. Even now, though, it’s important to remember that the long arc of valuation, like history, ultimately tends to bend away from incoherent free-association. Like the electorate, there is a large pool of independents in the stock market, and at least some of them have to be won over.

Eccentricities on the part of the CEO can be tolerated – even laughed about – when everything is going well. But things are not going well at Tesla.

Musk’s behaviour has exposed his company to legal risk it can ill-afford, as Thursday’s lawsuit from short-seller Andrew Left demonstrated. Last Friday morning, Tesla announced that Dave Morton, its chief accounting officer, had tendered his resignation on Tuesday – less than a month after he had joined the company. His parting words:

“Since I joined Tesla on Aug 6, the level of public attention placed on the company, as well as the pace within the company, have exceeded my expectations. As a result, this caused me to reconsider my future. I want to be clear that I believe strongly in Tesla, its mission, and its future prospects, and I have no disagreements with Tesla’s leadership or its financial reporting.”

Can I be the only one not terribly reassured by the latter part of that statement from a man who jumped ship after 29 days? And to think, he got out even before Musk decided to exceed his expectations still further by blazing up on camera.

It turns out I’m not the only one not reassured by all this. Tesla’s HR chief told Bloomberg News she was quitting. The stock fell another 8 % last Friday morning, revisiting levels seen in the panic of late March.

Tesla is now worth roughly US$21bil less than it was in the immediate aftermath of Musk’s infamous “funding secured” tweet.

The yield on the company’s 2025 bonds has blown past 8.5% to a new peak; it was less than 7% only a month ago. At a normal company, we would be long past the point where the board would have taken drastic action.

But Tesla’s board, like the company, is not normal. Make no mistake, even if the base is secured, Tesla’s vital swing investors are backing away. The joke’s getting old. –Bloomberg 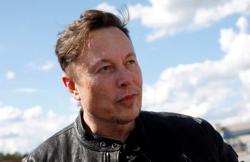