PETALING JAYA: The banking sector is not out of the woods yet, as analysts expect its performance for the year to be hammered on various fronts.

Although the first half-year earnings growth was higher at 10% year-on-year (y-o-y) due to lower credit costs and lower impairment expenses, the weaker economic growth projection, prevailing deposit competition and weak non-interest income (NOII) from capital market activities could put the brakes on its bottom line growth in the second-half.

However, the sector could get some reprieve moving into 2019 in terms of earnings uptick due to expected stable NOII and steady growth in net interest margins (NIM).

NIM is a measure of the difference between interest income generated by banks and interest paid out to depositors. The average lending rate and the three-month fixed-deposit spread serves as a proxy for the banking sector’s NIM. Analysts have lowered their projected earnings growth from an average of 7+% to 5+% for 2018.

Maybank Investment Bank (IB) Research has lowered its 2018 aggregate core operating profit growth to 3.7% from 6.0%, largely on account of the NIM and weaker NOII.

Correspondingly, its net profit growth forecast has been lowered to 7.0% from 7.7% previously.

AmBank Research has lowered its projected core earnings growth for 2018 at 5.8% from 7.6% earlier in line with the expected slowdown in the gross domestic product (GDP) growth.

Bank Negara has lowered Malaysia’s economic growth forecast for this year to 5% from its earlier estimate of 5.5% to 6%.

AmBank Research banking analyst Kelvin Ong told StarBiz that he expected pressure to remain on the funding cost in the near term due to deposits competition.

Nevertheless, he noted that NIM for the second half of the year to be either flat or slightly compressed compared with the first half, as the deposit repricing from the earlier overnight policy rate (OPR) hike in January had already largely worked its way through banks’ funding cost.

The decline of the NIM in 2Q18 was due to the upward repricing of deposit rates after the OPR increase in 1Q18 and higher funding costs from deposit competition moving close to the adoption of the net stable funding ratio (NSFR). 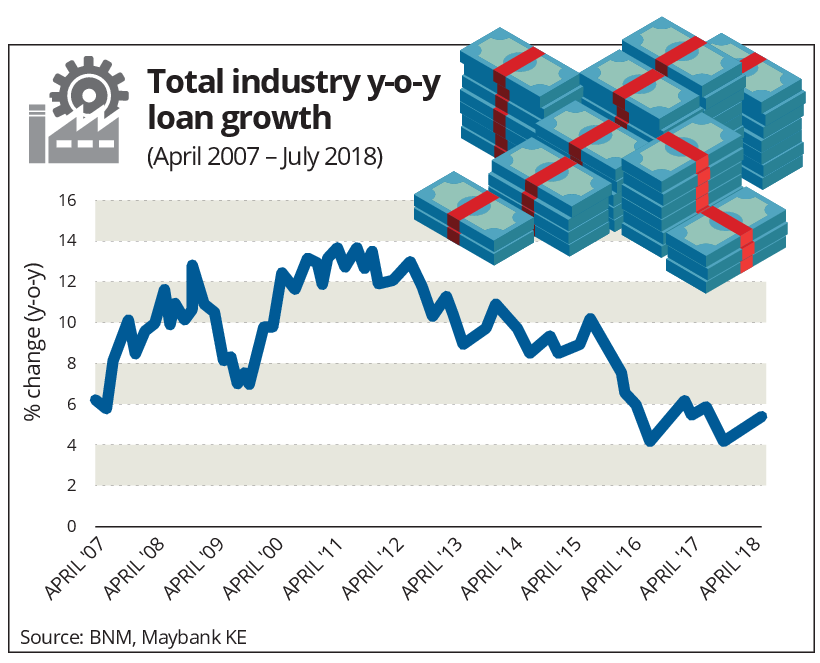 Bank Negara at its latest monetary policy committee meeting maintained the OPR at 3.25%. The central bank is set to meet next, and for the final round in 2018, to decide on the OPR move on Nov 8.

Analysts expected competition for fixed deposits to flare up moving closer towards the implementation of the NSFR. The upcoming Basel III NSFR is to be implemented no earlier than Jan 1, 2019. The NSFR measures a bank’s funding stability over a one-year period and complements the liquidity coverage ratio requirement, which measures liquidity over a 30-day horizon.

“Overall, we are of the view that full-year NIMs will stay flat in 2018. For 2019, NIMs will likely remain compressed as there could be some downward bias to the OPR, given growth concerns,” she added.

An analyst from a brokerage said the prevailing competition for fixed deposits has prompted most banks to guide downwards the full-year average NIM trend expectations from a low-single-digit expansion to a mid-single-digit compression. This would likely offset overall loan growth and lead to flat y-o-y net interest income trends in the second half of the year.

The implementation of the NSFR requirement of 100% or more would compel banks to increase overall funding profile tenures and consequently funding cost, he noted.

Most analysts expected loan growth recovery to be mild. CIMB Research banking analyst Winson Ng, who is maintaining his neutral call on the sector, expected loan growth to remain strong in August, but felt the momentum could start to soften in September on the expectation that auto sales and consumer spending could start to ease with the re-introduction of the sales and service tax.

Furthermore, he noted limited upside for business loan expansion, as some companies could hold back their investment or expansion plans in light of the uncertainties from the possible policy changes. Ng maintained his loan growth forecast of 4%-5% for 2018.

Ong said: “We expect loan growth for the second half to be marginally higher than the first, with consumer loans gaining traction in 3Q18 as consumer spending rises with the tax holiday, while business loans are expected to improve, looking at the better loan momentum for domestic non-household loans in the recent months.

Maybank IB Research in a note said against an average domestic loan growth estimate of 4.0% in 2017 for the seven banks under its coverage, it expected a stronger growth of 4.6% in 2018.

Wong projected the domestic banking industry’s loan growth to inch up to 5% in full-year 2018 after recording a muted 4.1% growth in 2017.

“Hence, the 5.3% y-o-y growth seen in July 2018 has been in line with our projection. Household loan growth (6.0%) continues to outpace that of business loans (4.3%), supported primarily by residential mortgages. After two consecutive years of contraction, auto loan growth is expected to be bumped up in 3Q18, given the three-month zero-rated GST window.

“Business loan expansion, on the other hand, is likely to remain soft until clearer economic development strategies are unveiled in the mid-term review of the 11th Malaysia Plan and Budget 2019.

“We think that loan growth for 2019 is likely to stay at around 2018’s level, although a firmer view can only be made when we attain more certainty on economic policies and potential relaxation on property lending guidelines,” Wong said.

On the sector’s growth for 2019, AmBank Research said that with the inclusion of BIMB Holdings Bhd

’s expected improvement in profits, which it had revised higher after the 2Q18 results, the brokerage projected the sector’s earnings to grow by 6.2% in 2019.

“For 2019, we project a stable NOII for the larger banks, Malayan Banking Bhd

, while NIMs are anticipated to be steady or at a slight expansion compared with 2018. Our top picks are Public Bank Bhd

and BIMB. We like banks with a favourable proxy to the consumer and SME segments, as well as those with attractive valuations,” it noted.