PETALING JAYA: There has been quite a bit of buying and selling of neighbourhood malls in the past week and it would seem that the sale and purchase of a third mall is likely to be concluded soon.

AsiaMalls Sdn Bhd, which has been in the news the past week, is said to have found a third buyer for one of the five malls in Malaysia.

According to sources, it may be concluding the sale of Setapak Central Mall with global integrated real estate fund manager ARA Asset Management Ltd, based in Singapore.

Although no price was given, Parkson Holdings Bhd

, which developed the mall via wholly owned subsidiary Festival City Sdn Bhd, sold the mall to a fund for RM349mil cash in August 2014.

AsiaMalls declined to answer questions emailed to it, while ARA Asset Management was non-committal on whether it was being courted.

ARA Asset Management country head June Lim declined to comment other than saying that “people come to offer us malls all the time”.

Last Wednesday, KIP Real Estate Investment Trust announced to Bursa Malaysia that it was buying the four-storey AEON Mall Kinta City in Ipoh, Perak, from PGIM Real Estate for RM208mil. The mall has a total lettable area of 530,200 sq ft and has a 14.88acre land area.

Yesterday, a business daily reported that AsiaMalls had sold the SStwo Mall for about RM180mil to developer DK Group of Companies. The mall is owned by SStwo Mall Sdn Bhd, which, in turn, is wholly owned by AsiaMalls.

Danny Koek Tiang Kung, the founder of the DK Group of Companies, said he had purchased SStwo Mall Sdn Bhd, the mall owner.

“I bought the company which owns the mall,” he said.

However, Koek declined to say how much he had paid for the mall owner.

The seller of both the AEON Mall Kinta City in Ipoh and SStwo Mall in Petaling Jaya is PGIM Real Estate, previously Pramerica Real Estate Investors.

“It has a land area of 7.81 acres, so there is enough space for all of the new developments. This is a very established and prime location and there has not been much development in the area the last several years.

“We are planning to put in our submission to the local authorities for our plans,” he told StarBiz.

As for Setapak Central Mall, the third mall that has been put up for sale, according to its website, it was previously known as KL Festival City before its 2015 rebranding exercise after PGIM Real Estate bought the mall in 2014 from the Lion Group. It was developed by Festival City, a wholly owned subsidiary of the Lion Group.

Located at Jalan Genting Klang in Danau Kota, a Setapak township, it is a three-storey retail mall with an NLA of 494,000 sq ft. It comprised hundreds of serviced apartments known as ZetaPark which sit on top of the retail floors.

It is a leasehold development. The mall has a basement car park with about 1,100 parking bays.

The closest train station is the Wangsa Maju LRT station. 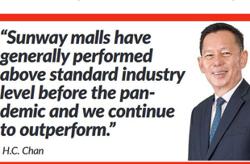