China blues: The collapsed deal would mean China remains a crucial missing piece for AirAsia Group chief executive officer Tan Sri Tony Fernandes, who has been expanding in the region with affiliates in Indonesia, Thailand, India, Japan and Vietnam to tap an aviation boom. — AFP

’s planned foray into China for a wider regional footprint suffered a setback after South-East Asia’s largest budget airline failed to secure a deal with its local partners to tap the world’s second biggest aviation market.

A preliminary agreement signed last year for a venture with China Everbright Group and the Henan government has lapsed and won’t be extended, AirAsia said in a filing on late Thursday, without providing further details. A spokesman for the low-cost airline didn’t immediately respond to an email sent Friday, a national holiday. The collapsed deal would mean China remains a crucial missing piece for AirAsia Group chief executive officer Tan Sri Tony Fernandes, who has been expanding in the region with affiliates in Indonesia, Thailand, India, Japan and Vietnam to tap an aviation boom.

The Malaysia-based company has ordered hundreds of planes worth billions of dollars from Airbus SE to meet its plans as the region’s expanding economies make air travel more affordable.

The disclosure comes at a time Malaysia’s Prime Minister Tun Dr Mahathir Mohamad has been reviewing projects signed by his predecessor, risking Beijing’s displeasure. In July, his government suspended the East Coast Rail Link, which was being built by China Communications Construction Co with an estimated price tag of RM81bil.

During his campaign trail ahead of his election win in May, he had criticised Chinese investment in his country, and warned against new ‘‘colonialism” in Beijing this month during a visit designed to mend fences between the two nations.

AirAsia, Everbright and the Henan government entered into an MoU on May 14 last year to discuss and negotiate a definitive agreement for the venture.

The non-binding preliminary agreement was valid for 12 months.

The discount carrier had planned to invest in aviation infrastructure, including a dedicated low-cost carrier terminal at Zhengzhou airport and an academy to train pilots, crew and engineers, as well as maintenance, repair and overhaul facilities to service aircraft. — Bloomberg 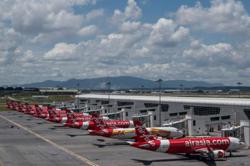