(code: 0032) has been on a winning trend over the third quarter of 2018, retracing some of the steep losses it saw during the first quarter of the year.

The stock had come off a year’s high of 42.5 sen at the start of the trading year, plummeting to a low of 21 sen by April 4.

Ever since it reached bottom, the counter entered consolidation mode and saw signs of life in early May before pulling back and resuming a sideways movement.

It wasn’t until the final week of July that some sustained momentum came into the picture, triggering the start of a rally that would see the stock cross the uppermost 200-day simple moving average (SMA) for the first time since December 2017.

In Friday’s session, the stock gapped up at the opening bell and reached for a session high fo 33 sen. At this trading level, the share price has crossed the 50% Fibonacci retracement ratio.

The resistance ahead on the daily price chart is pegged to 35 sen, the upper end of a downside gap left behind in February.

The resistance-turned-support 200-day SMA is at 30.5 sen. A fall through this mark would be a bearish development for this present rally, suggesting the stock could return to a lower support at the 50-day SMA at 26 sen.

However, the technical indicators are looking poised for more growth. The slow-stochastic momentum index has breached the overbought line but remains in an ascending position.

The 14-day relative strength index is similarly in overbought territory at 76 points. 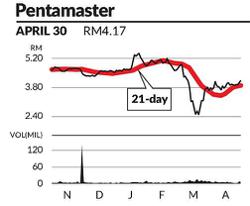