Low: The demand for rubber gloves is expected to remain strong.

KUALA LUMPUR: The Malaysian rubber glove industry anticipates that exports will rise to RM18.8bil this year, representing a 16% increase from the value recorded last year.

The country currently holds 63% of the global market share and hopes to increase its share to between 65% and 68% in the next two years.

The second biggest producer of rubber gloves is Thailand with 21% global market share, followed by China and Indonesia with 5% and 3% share respectively.

The Malaysian Rubber Glove Manufacturers Association (Margma) told a press conference yesterday that global demand stood at 268 billion gloves per year, and the industry expected an annual growth in demand of 15%.

Margma president Denis Low said that while the United States is the world’s biggest importer of rubber gloves, Asia – particularly China and India – was seen as the driver of growth moving forward.

The United States has a per capital usage of rubber gloves of 75 pairs, followed by Europe with about 50 pairs per capita.

He said the usage for rubber gloves in China and India was relatively small, at about two and three pairs per capita respectively, but was expected to see a steep increase in demand due to growing affluence.

“In the future, if India and China, with their combined population of 2.5 billion people use even one third of the number of gloves the United States is currently using, imagine the level of demand for the product,” he said.

The association also sees mimimum impact for the industry from the ongoing US-China trade war, as well as from the impending increase of minimum wage in Malaysia.

It also expected the US dollar to remain strong, and benefit Malaysian exporters.

“While a trade war is never a good thing, the demand for rubber gloves is expected to remain strong as they remain an essential item in the healthcare industry,” he said.

The increase in minimum wage, he added, would be “manageable” for the industry as productivity per worker continued to rise as well.

On the challenges facing the industry, Margma vice-president Dr S. Supramaniam said about 90% of the latex requirements for the industry was currently imported, mostly from Thailand, despite Malaysia being a producer of rubber.

He said this was due the majority of smallholders in the country preferring to produce dry rubber instead of latex.

“We are in talks with the government to look at how to encourage smallholders to produce more latex.

“The government is studying several options such as providing them with incentives,” he said.

He said the industry aimed to source 30% and 40% of its requirements for latex from the domestic market in the next three to four years.

Margma is organising the Ninth International Rubber Glove Conference and Exhibition 2018. The three-day event will begin from Sept 4 at the Kuala Lumpur Convention Centre. The event is open to the public and entrance is free. 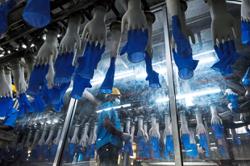