Malaysia's equity market rallies for eight days in a row

PETALING JAYA: The local equity market has rallied for eight days in a row, with investors picking up beaten-down stocks as concerns of a global trade war ease with United States economic growth taking a positive turn.

On Tuesday, the Federal Reserve (Fed) expressed confidence in the US economy, citing a strong job market and inflation figures which are in line with the Fed’s targets, despite fears of a global trade war.

The ringgit, however, continues to weaken as the dollar strengthens, boosted by Fed chair Jerome Powell’s remarks on Tuesday.

The ringgit traded at 4.0588 against the US dollar, its lowest in almost seven months. 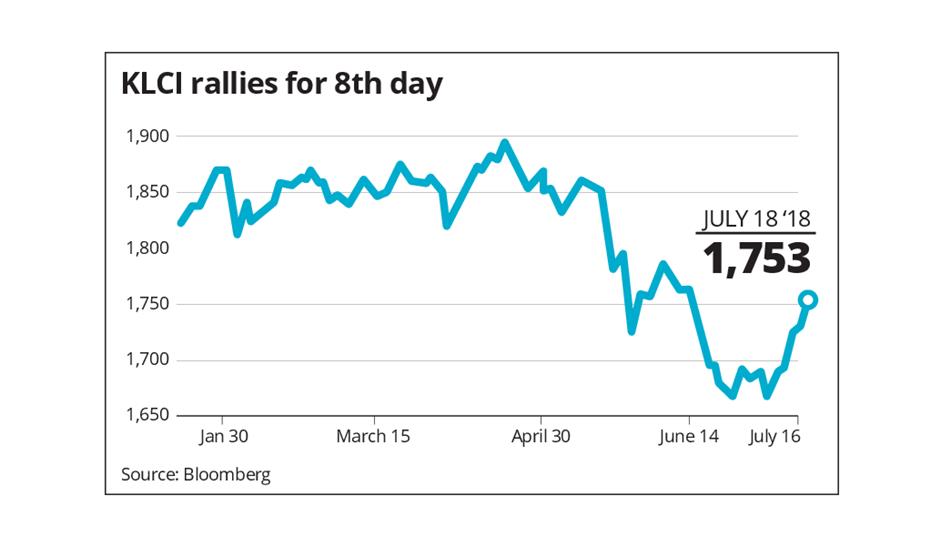 The weakening ringgit was in line with the overall weakness in other Asean currencies, which have been trending downwards since April.

Nomura Research is targeting the FBM KLCI, which tracks the local equity market, to end the year at 1,830 points, reflecting more than a 6% upside from the current level.

The research house, however, said that it has revised down its end-2018 FBM KLCI target from 1,920 previously due to the unexpected rebooting of Malaysian politics, which has brought about some key policy changes, as well as the US-China trade feud.

“The unwinding of the central bank liquidity and a weakness in the ringgit have also weighed on market performance,” it said in a report yesterday.

Overall, in the next 12 to 18 months, Nomura is expecting the local equity market’s performance to be dominated by an improvement in consumer confidence and subdued business spending. The government’s search for lower fiscal operating expenditure and higher revenues could potentially pose an upside risk to corporate dividends, while regulatory changes favour consumers.

It expects government-linked companies, which make up the majority of the 30 constituents of the FBM KLCI, to dish out higher dividends this year to make up for the revenue shortfall from the goods and services tax.

“We believe that the fourth-quarter results season for Malaysian corporates has an increasing likelihood of seeing some special dividend surprises.

“We are likely to see more dividends from these stocks in the next two fiscal years to help buffer some of the revenue shortfall,” Nomura said.

inched up five sen to RM5.55 and Digi.com Bhd

Among Nomura’s top-pick sectors for this year are banking, transportation, tourism, healthcare and consumer.

“We like Malaysian equities which are leveraged to consumption and are not dependent on government largesse for their revenue, and can potentially steer clear of regulatory recalibration,” it said.

Nomura is expecting the new government to struggle to meet its 2018 deficit target, or it may pursue further fiscal consolidation in 2019 when growth begins to deteriorate more visibly.