PETALING JAYA: An alternative proposal to have a railway link to Singapore by upgrading the present infrastructure will only cost the government RM20bil – much lower than the high speed rail (HSR) project which will cost between RM60bil and RM70bil.

The proposal will also save the government some RM500mil as it will not need to re-negotiate with Singapore since the plans that have been put in place by the authorities in the republic will not be disrupted.

According to sources, the Council of Eminent Persons (CEP) has been briefed on the alternative plan that utilises the existing double-track infrastructure of Keretapi Tanah Melayu (KTM).

The only major difference is the travelling time of 130 minutes to Singapore compared with 90 minutes by the HSR.

However, consultants said that the travelling time might be reduced with new locomotives that are able to travel at a higher speed without compromising on safety.

This could be made possible if the government were to allow third parties to operate rail lines owned by KTM.

“The third parties would be prepared to invest in better locomotives and run operations on a commercial basis. 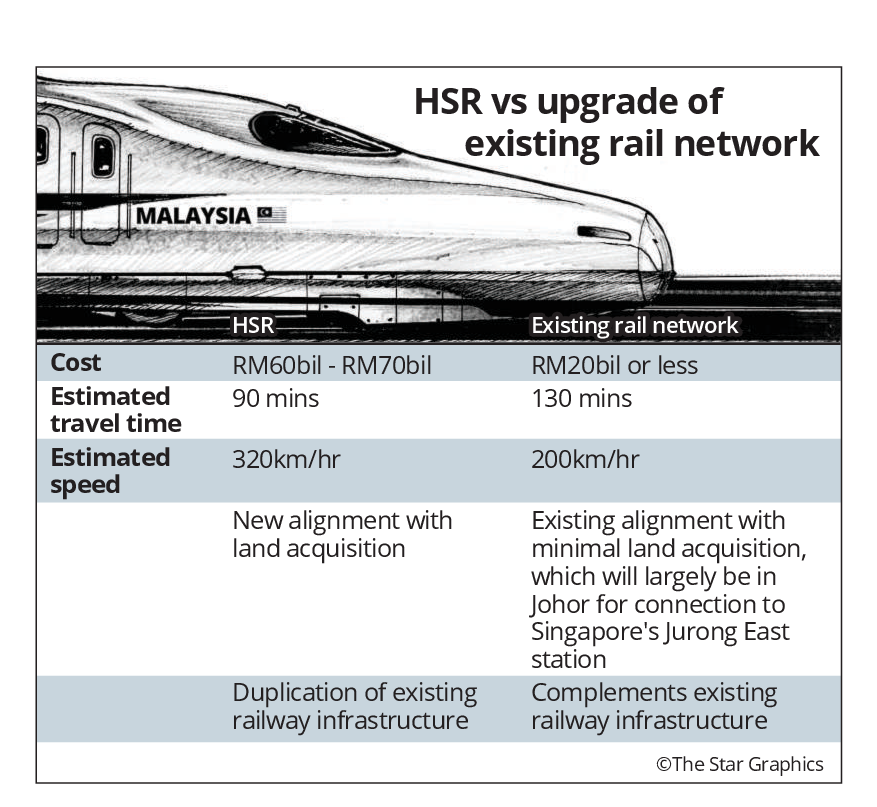 “Travel time can potentially be reduced,” said a consultant.

Notwithstanding the travel time, the key feature of the alternative proposal of utilising and upgrading existing railway infrastructure would bring about good rail connectivity to Singapore at a substantially lower cost.

“Cost will be shaved by more than RM50bil, which is 70% lower compared with (building) the HSR. This does not include land acquisition cost and possible cost overruns incurred by the HSR project.

“It would not lead to a duplication of railway lines,” said sources.

The HSR is one of two projects that had been taken off the shelf for the time being under the Pakatan Harapan government led by Tun Dr Mahathir Mohamad.

The other is phase three of the Mass Rapid Transit project.

Dr Mahathir had said that the distance between Malaysia and Singapore is short at only 350km and if the existing railway infrastructure is upgraded, it can improve travel time significantly.

The CEP is helping the government achieve its election promises within the first 100 days. High on the list of the CEP is to look into areas where the government can save cost, without compromising on quality, and improve governance as well as the handling of public finances.

The constraints on public spending came about amid the move to abolish the goods and services tax and revelation that the federal government debt is more than RM1 trillion.

Sources said central to the upgrading plans of the existing KTM network was to improve the existing double track infrastructure whereby it could cater for standard gauge and meter gauge trains.

This can be done by putting up a single line next to existing double track.

“Effectively, the tracks will be able to cater for trains running on standard gauge and meter gauge, which is the existing infrastructure,” said a source.

The HSR, between Malaysia and Singapore, is to run on a completely new alignment and travels at speed of 320km per hour.

The alternative plan is to upgrade the existing railway tracks by using most of the railway alignments. The travelling speed with standard gauge trains is about 200km per hour.

Sources said that upgrading the existing infrastructure would be cheaper compared with the suggestion by some quarters to extend the Express Rail Link (ERL) from the KL International Airport (KLIA) to Singapore, a venture that could potentially cost at least RM30bil.

“The suggested ERL extension plan would involve a completely new alignment from KLIA and there is not much of a difference in travelling time compared with the plan to upgrade the existing infrastructure,” said a source.

The ERL is operated jointly by YTL Group and Lembaga Tabung Haji. It is a line currently servicing the Kuala Lumpur Sentral to KLIA route via stations in Bandar Tasik Selatan and Cyberjaya. ERL has said that it is prepared to extend the line to Melaka if the government approves the plan.

“The advantage for the ERL is that there is an existing station that can be upgraded to incorporate an immigration clearance check post,” said a source.