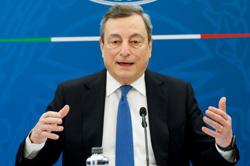 Britain's FTSE 100 ended at a new record high, up 0.9 percent in a half-day of trading for the index.

MILAN: Italian stocks slumped on Monday at the end of a roller-coaster session as investors fretted that new elections could see anti-establishment parties win more support.

Italy's FTSE MIB benchmark index <.FTMIB> fell 2.1 percent to its lowest level since early March, while the pan-European STOXX 600 <.STOXX> index shed 0.3 percent on a day when activity was limited by market holidays in Britain and the United States.

The Italian index had risen as much as 2 percent in early trade after Italy's president vetoed the Five-Star and League parties' choice of a eurosceptic economy minister. The move prompted them to abandon efforts to form a government and raised the prospect of a snap election in the autumn.

But the relief was short-lived as the focus quickly turned to risks that Italy's election campaign could focus on the country's continued membership of European institutions and strengthen the populist parties' hand.

"It's another moment of uncertainty," said Gilles Guibout, portfolio manager at AXA IM in Paris.

"Now we need to understand what could be the outcome of a new vote but what’s clear is that Europe will be at the centre of the debate of the next campaign," he added.

Italian President Sergei Mattarella appointed a former International Monetary Fund official as interim prime minister with the task of planning for snap polls and passing the next budget. That helped Italian stocks end off lows.

Italian banks <.FTIT8300>, which are seen as a proxy for political risk due to their big government bond holdings, suffered their biggest one-day fall since Feb. 2017, down 4.1 percent, having jumped more than 3 percent at the open.

"At the rate it's going, we should hit this round number (8,000 points) by Thursday, if not earlier," said IG's market analyst Chris Beauchamp during morning trading.

He pointed out that this performance comes despite "political ennui, Brexit turmoil and a deteriorating consumer backdrop".

The sharp fall in the pound since the middle of April has given an accounting boost to blue-chip companies which generate some of their revenues in foreign currencies and makes their shares cheaper for foreign investors.

Sentiment towards risk assets also improved since the United States and China agreed to continue talks to boost U.S. exports to China, easing worries over a possible global trade war.

"The FTSE benefits from a smooth ... trade outlook between the United States and China," Ken Odeluga, market analyst at City Index, said.

Rises between 1.2 percent and 1.3 percent in HSBC, Lloyds and Barclays shares helped boost the index as did gains in miners including Fresnillo, Glencore or BHP Billiton.

Shares in British retailer Marks & Spencer were the worst performing of the index and lost 2.8 percent after it disclosed plans to close more than 100 stores in its home market by 2022.

Among smaller companies, results weighed on Pets at Home, which fell more than 13 percent as lower margins weighed on full-year profit. The company has been trying to cut prices to fend off German rival Zooplus.

British bicycles to car parts retailer Halfords fell 11.7 percent to the lowest since the beginning of April after it warned profits were unlikely to grow this year.

Inmarsat dropped 7 percent on the back of concerns that its monopoly in maritime safety communications could come under threat from rival Iridium Communications. 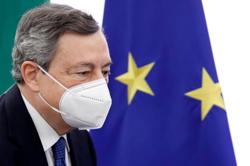