Median salary for employees in Malaysia increased by 7.7% in 2017 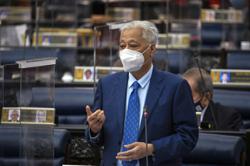 This is according to the Salaries & Wages Survey conducted by the Department of Statistics, Malaysia (DOSM).

Apart from that, the growth rate for median monthly salaries & wages of employees in the urban area increased by 6.6% per annum to RM2,260.

In comparison, the median monthly salaries & wages for employees in the rural area grew 3.6% to RM1,400.

The survey is conducted yearly through household approach to collect information of monthly salaries & wages from the principal occupation of paid employees.

It is carried out using probability sampling covering all states in Malaysia.

Salaries and wages refer to wage rate consisting of the basic wages, cost-of-living allowances and other guaranteed and regularly paid allowances either in cash or in kind (food or lodging) as well as overtime payment.

In this survey, a paid employee is defined as a person who works for at least six hours a day or at least 20 days a month.