Mak: Our group wholesale banking practice however looks at clients holistically, based on their longer-term potential – not just in fair weather. Time will tell if our strategy has been correct.

TWO years into the job as the CEO of group wholesale banking at CIMB Group Holdings Bhd, Mak Lye Mun says the division has achieved most of what it set out to do and growth plans are intact.

But true to his conservative nature which is well displayed during this lengthy interview, Mak is not celebrating just yet.

“Always under-promise and you will over-achieve,” he quips.

That mantra could be especially useful in an industry like his, one that is closely intertwined with fortunes of clients – something which no one can ever accurately foretell.

“With the larger banks or institutions, there is always the temptation to only choose or cherry-pick clients which can deliver ROI for just this year, or next year, or for strategic transactions that can bring in immediate value.

“Our group wholesale banking practice however looks at clients holistically, based on their longer-term potential – not just in fair weather. Time will tell if our strategy has been correct,” he says.

“Of course, the more risky the borrower, the more income you make but that might come back and bite you later on,” adds the 60-year-old seasoned investment banker.

If numbers are anything to go by however, it appears that things are on track for the division which has had to deal with – over the last few years – high operating costs that resulted in several loss-making businesses outside of the lender’s main Asean markets.

For the financial year ended Dec 31, 2017 (FY17) for instance, CIMB’s wholesale banking division which operates in the bank’s core markets of Malaysia, Singapore, Indonesia and Thailand saw its profit before tax contribution to overall group pre-tax profit stand at 42%, up from 34% in FY16.

At 42%, its contribution was similar to that of CIMB’s consumer banking segment.

“When I started in 2016, we said let’s try to manage our provisions, in 2017 we saw lower provisions than 2016 and this year, we are also forecasting much lower provisions for wholesale,” says Mak, who is also CEO at CIMB Singapore.

“We did some scrubbing, so you don’t see a lot of loan growth, we didn’t want to take high credit risks.”

As a result, wholesale banking’s quality of credit is “generally better” now, he says and this is a strategy that it intends to continue to pursue.

In terms of its cost to income ratio (CIR) which is a benchmark of overall productivity, Mak says the segment is on the way to achieving its set target, which is 40% CIR by 2018/19, ambitious as it may sound.

“Last year, we reduced our CIR by 200 basis points from 49% to 47%, for this year, we think that the downward trend will continue,” says Mak.

The primary reasons for CIMB’s wholesale banking division’s drop in costs last year were a much improved revenue contribution from its core markets, reduction in costs outside its non-Asean markets like Hong Kong, and its equities business which turned profitable.

This year, the lender’s joint-venture (JV) with China Galaxy Securities Co Ltd (CGS) which was recently completed, will further cause a drop in costs.

CIMB Securities International houses the bank’s institutional and retail brokerage business as well as equities research in Indonesia, Singapore, Thailand, Hong Kong, South Korea, India, the UK and the US.

Notably, by the end of the first half of this year, CIMB’s Malaysia stockbroking business is expected to be included into the JV.

“This year however, we have to make up for the loss of revenue from the de-consolidation of our equities business, we think we will still show some topline growth, notwistanding the loss of some revenue but we also de-consolidate some expenses due to the JV, so net net, it’s a good thing.”

Mak notes that CIMB’s equities business which has been loss-making for the last few years turned profitable last year due partly to more efficient reallocation and use of resources, and for the first three months of this year, the business remained profitable.

Moving forward, he says costs should continue to trend down helped also by processes and technology put in to improve productivity.

The wholesale banking division, he notes has committed to invest 1% of its annual revenue on technology but the way in which the business views technology is relatively different from the way its counterparts see it.

“For wholesale, technology is viewed more as a partner and enabler, not a disruptor unlike consumer banking where fintechs want to eat their lunch...

“Technology helps us become more efficient and to be compliant, it frees up our people to do more value-added work...wholesale is really about knowing your customer... it’s all very tailor-made, I am not overly concerned about fintechs disrupting our corporate or institutional business.”

He says on the whole, the division’s CIR has also come down because it has been generating more revenue across all countries, helped by improved market conditions.

“Lowering cost can only take you so far.”

For this year, wholesale banking growth should come primarily from all segments and countries but Mak thinks that private banking and Indonesia will likely dominate.

Private banking because of a surge in new monies and client networks that the group has managed to build over the years, and Indonesia, because the country has “a lot of potential with ongoing infrastructure projects” that will need financing and trade that it can help facilitate, he says.

“Private banking is growing very fast and has now become a larger profit contributor than IB. The biggest contributor for us last year was corporate banking, followed closely by treasury and markets, ” he says.

Having said that, he says while IB’s profit contribution is relatively small, it adds “a lot of value” in other ways.

“You cannot say just because IB doesn’t contribute as much to the profit line as the other units.. .it is not important, it is important for profiling for example, and IB remains an important part of business.

“It also doesn’t use a lot of capital unlike corporate banking for instance which takes capital and the risk-weight is there, in IB you do an M&A, you don’t normally use capital there, right?”

He notes that in the IB business, the lender will continue to maintain its current leadership position in Asia.

“When the markets are good, we will make more money, as for the deal pipeline, it is there and that’s gravy for us. But we all know a pipeline remains just a pipeline...markets can be very volatile.”

Meanwhile, based on recently-released data, betting on private banking for growth does seem like a strategy in the right way.

The Asian Private Banker reported this week that assets under management (AUM) at Asian private banks increased by almost 30% last year to US$2 trillion, buoyed by China flows and healthy financial markets.

At US$2 trillion, this was reportedly the fastest annual growth in the region since the Hong Kong-based publication started collecting such information six years ago.

In terms of ranking, UBS Group AG was said to have managed the highest amount of assets among the top 20 firms, followed by Citigroup Inc and Credit Suisse Group AG.

Comparatively, CIMB currently manages over US$13bil in AUM. However, it does aspire to be among the top 20 in Asia Pacific.

Based on the 2016 League Table Private Banking, it is currently slightly outside the Top 20 list, with number 20 on the list managing an AUM of US$15bil.

Mak admits that competition is intense although the pie seems huge enough with individuals in the region getting richer, thanks partly to the creation of new economies. One advantage it does have over its larger and more experienced competitors is the relationships that it has established with individuals in Asean and Asia.

“For example, in Malaysia, because we are strong in IB, we know all the movers and shakers here and in the past they may never have really banked with us but our experience with them in IB can make it easier for us to talk to them about handling their private wealth .”

Having been in the role for two years now, Mak hints at the possibility of relinquishing it to someone else in the not-so-distant future.

“Perhaps a lady who will have a softer touch,” he jokes.

A firm believer of no one being indispensable he says: “When you take on a new role, your ultimate goal must be to marginalise yourself, if you can do this, you would have done a good job.”

By marginalise, he means to have trained up a team not fully dependent on one leader.

He believes he’s been able to do this by getting “very capable people in all the right seats”.

But there are still challenges.

He points out that the workforce of the future needs to be agile, able to take on new challenges and learn new skills.

“That is the nature of the world today and I am focused on building talent with capabilities which will enable them to work across industries and geographies.”

He says skill-mobility is essential for anyone in the banking industry but especially for CIMB’s franchise where it wants to have deeper and wider capabilities across Asean.

In a business such as this, Mak believes that it’s almost always 70% luck and 30% hard work.

“Let’s not say all success is due to one person but neither is all failure due to a single person, we have been lucky so far... hopefully, we will continue to be lucky, something like what Napoleon (Bonaparte) said... I’d rather have lucky generals than good ones...”

“Also, we can plan but things always change, it’s how fast you react that counts.” 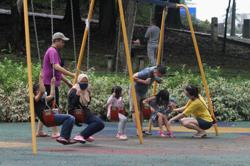