, may be low-profile but are seasoned businessmen (see chart). 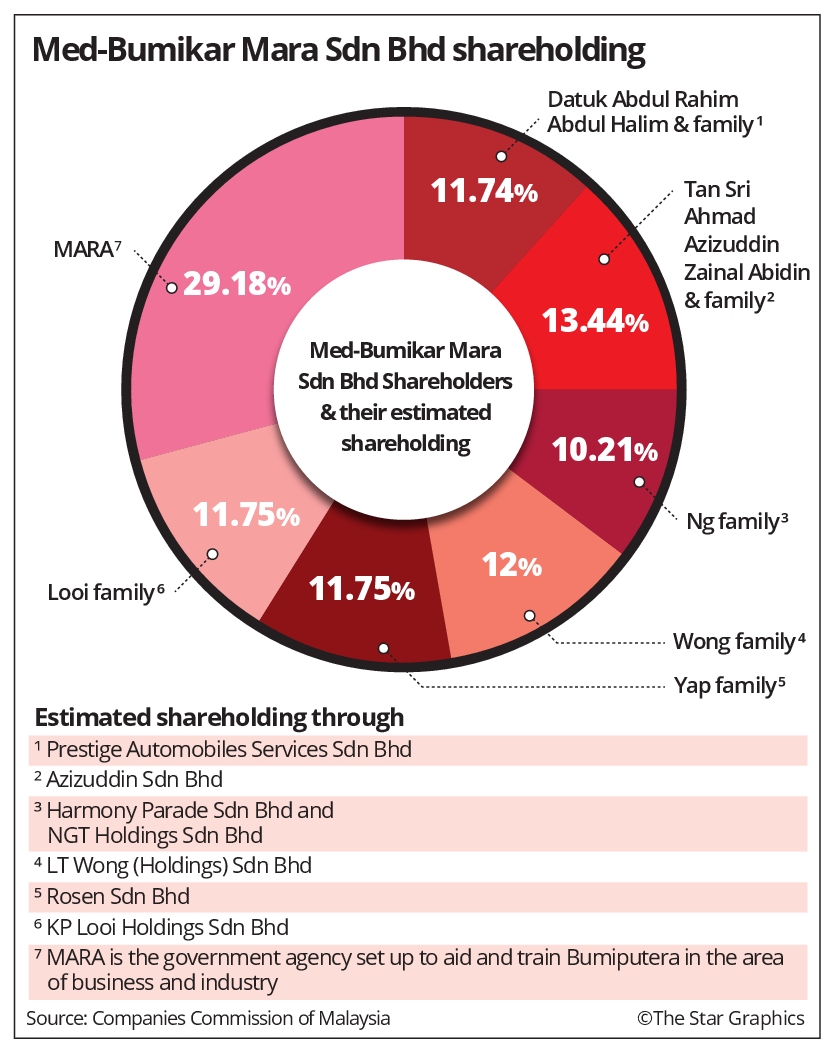 Their business is tied to what is termed in corporate circles as “old money”, having interests in various sectors such as rubber, automobiles and property development.

Government agency Majlis Amanah Rakyat (Mara) is the single largest shareholder in Med-Bumikar Mara, while these family-owned companies control almost 65%, with individual family members from the family-owned entities owning the rest of the shares.

Abdul Rahim is the chairman of Med-Bumikar Mara and a seasoned hand in the company and its dealings with Perusahaan Otomobil Kedua Sdn Bhd (Perodua), given that he is a founding director of the profitable local carmaker.

He is currently chairman of MBM and was previously its managing director until 2006.

Separately, Abdul Rahim also sits on the board of Rubberex Corp (M) Bhd

– a company which manufactures and sells rubber gloves in which Med-Bumikar Mara has a 21.1% stake.

Azizuddin Sdn Bhd is a company linked to former Perak state speaker Tan Sri Ahmad Azizuddin Zainal Abidin, who was at one time the former chairman of IJM Corp Bhd

, a listed company that distributes mechanical power transmission products to a wide array of industries from palm oil to power generation and cement.

Collectively, these two entities control about 10.21% of Med-Bumikar Mara.

His departure sparked rumours of possible conflicts with some shareholders of Med-Bumikar Mara.

The company and Looi together control about 11.72% of Med-Bumikar Mara.

LT Wong Holdings is a company linked to Wong Wei Khin and Wong Fay Ling and hold about 12% in Med-Bumikar Mara.

Meanwhile, Rosen Sdn Bhd is the vehicle of the Yap family, who hold 11.75% in Med-Bumikar Mara.

Med-Bumikar Mara owns a 50.07% stake in MBM, which has a direct 20% stake in Perodua – the jewel in the crown of the MBM group, which UMW Holdings Bhd

MBM has two board seats in Perodua, while subsidiary Daihatsu Malaysia has one out of the total 11 board seats.

Limited buyers for a minority stake in Perodua

UMW likely to get its way in MBM