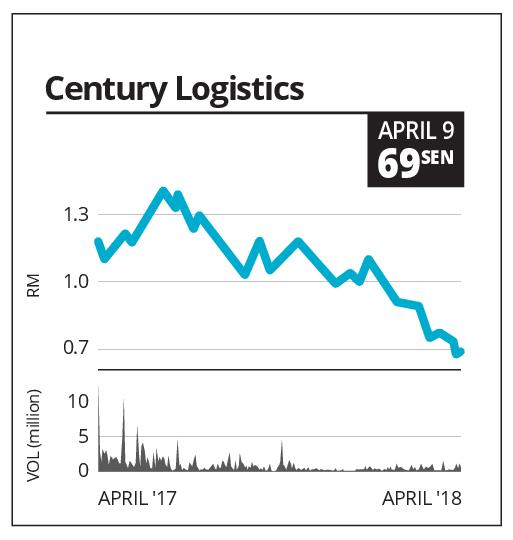 VISITING the company’s parcel-sorting operations at its headquarters, Kenanga Research said it is comforted that Century Logistics’ courier services operations are going on track.

It said Century Logistics is currently operating 10 other similar distribution centres across the west coast of Peninsular Malaysia, serviced by 86 delivery trucks.

All in, the company sorts about 7,000 to 8,000 parcels per day, with its largest shareholder CJ Logistics playing a crucial role in securing delivery volumes from key customers.

“From here, management intends to expand rapidly and targets to reach 350 trucks and 25 distribution centres by end-2018, with expected capital expenditure (capex) at around RM33mil,” it said.

From the site visit, Kenanga gathers that Century Logistics’ warehouses in the Klang Valley are mostly operating on near-full capacity.

“At its headquarters, we witnessed its warehouses are fully packed with consumer electronics as well as food and beverage goods.

“This is due to an influx of new warehousing spaces in that area, resulting in increased competition,” the research house said.

Located at the Eastern Gateway Industrial Hub in Klang, construction progress for its upcoming multi-storey warehouse stands at around 20%, with expected commencement in 2019. Total capex is expected to be around RM120mil, with the bulk of it to be recognised this year.

“Upon completion, the multi-storey warehouse will serve as the company’s new headquarters, bringing an additional 450,000 sq ft of warehousing capacity to the current 2.2 million sq ft that it currently manages.”

This is because a large portion of the ground floor will be gazetted as the company’s main sorting hub for its courier service operations, which should bring its sorting capacity to well over 100,000 parcels per day. 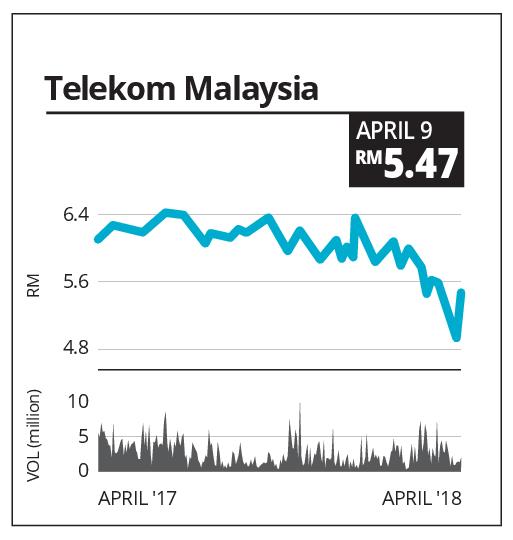 It said the stock is currently trading at minus one standard deviation of its five-year mean price-to-earnings ratio of 23 times.

“Note that TM is a dominant fixed-broadband player in Malaysia and the operating landscape is currently stable.

“To recap, TM recorded some 2.3 million additional broadband customers, with UniFi take-up rate remaining strong throughout 2016 and 2017,” it said.

UOB Kay Hian believes 2018 will see flattish earnings prospects for TM, as it projects core earnings to come in at RM850mil on the back of higher marketing efforts and a lower number of public sector jobs.

“Together with continuous fibre roll-out under the High-Speed Broadband Phase 2 and Sub-Urban Broadband programmes, TM aims to add 500,000 new UniFi customers by end-2018.

The research house sees potential risk from the Government’s aim to double the speed at half the price by 2019.

“This risk remains an overhang on near-term share price performance although we understand that TM has started offering student and e-business (for online entrepreneurs) packages to fulfil the government mandate.”

“This will be partly offset by UniFi mobile’s losses arising from higher roaming charges. All in all, we are projecting below-consensus three-year earnings compounded annual growth rate of 2.6% (2017 to 2020). 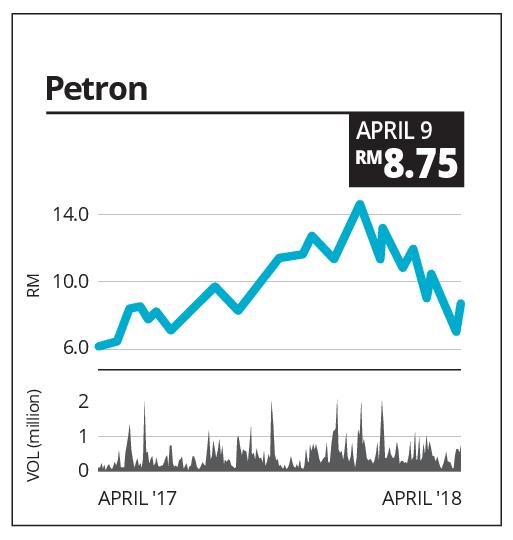 RHB Research reckoned that the key reason for the stock’s selldown is the expectation of lower refining spread for the company this year on the back of stronger oil prices (feedstock).

The research house said other possible reasons included the overall weak market sentiment due to the trade war between the United States and China.

However, RHB pointed out that Petron’s sales would not be impacted directly as its product are not targeted at China or the United States.

It expects the refining margins to be weaker in 2018 compared to 2017 because last year was an exceptionally good year for refiners on major plant turnaround activities and favourable oil price movements.

However, this year, refining margins are expected not to be as high as in 2017 as the refining market normalises while feedstock costs continue to be higher on elevated oil prices.

However, at the current price level, market expectations are too low, given that Petron’s gearing has reduced significantly throughout the years, making interest costs lower, while sales volume is growing. It reckoned that the recent selldown was overdone.

This implied forecast financial year 2018 (FY18) price-earnings (PE) ratio after adjusting for lower earnings of 8.7 times, which RHB said is an attractive level given that an average small-to-mid-cap stock usually trades at 10 times forward PE.

RHB said its margin assumption for Petron is conservative, given that it implies a 35.4% y-o-y decline in forecast earnings for FY18, while the refining market is partially supported by sustained turnaround activities of refineries in the Asean region.

The research house has reduced its FY18-FY20 core earnings forecast by 29%, 9%, and 6%, respectively, to account for lower gross margins.

RHB has maintained a “buy” call on Petron shares with a lower target price of RM10.70, after its earnings adjustment and lower PE assumption of 11 times from 12.5 times. 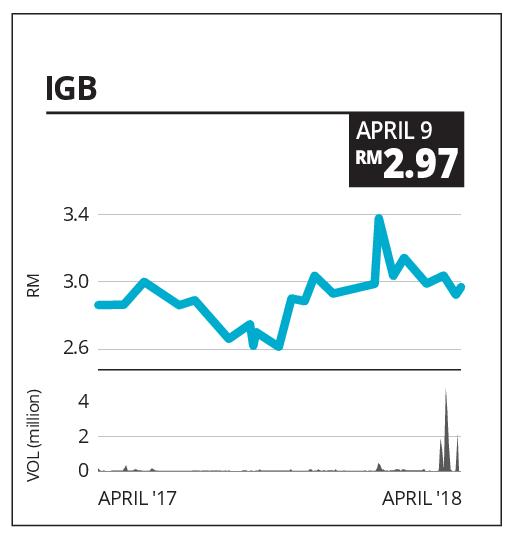 PublicInvest Research said that in terms of operation, the combined entity should not have much overlaps and hence, see business as usual, going forward. Datuk Seri Robert Tan was also just appointed as the group’s CEO.

As for pipeline assets, Southpoint Tower in Mid Valley City (offices) is on track to be completed by the first half of this year.

As reported earlier, PublicInvest said the pre-leasing indications suggested that demand is good and the building should have no problem filling up once it is completed.

The remaining one-third of Southpoint Tower, which was converted into residential units, was also soft-launched with selling prices ranging from RM1,600 to RM1,800 per sq ft.

As for Mid Valley Southkey in Iskandar Malaysia, the new mall is on track to be unveiled by second-half this year, with opening of the mall expected on Aug 8.

To recap, the project has a combined gross development value of RM6bil and will be developed in a few phases.

As for the first phase, IGB will build a mall which is said to be an improved version of the existing mall in Midvalley, Kuala Lumpur.

Other phases will encompass three hotels (870 rooms), four offices and one serviced apartment (290 units) with an estimated development period of 12 years.

It is understood that the pre-leasing has started, with the group confident to open the mall with most of the available rental space taken. Rental is also expected to be at least 80% of the current rental enjoyed by Mid Valley City.

Separately, PublicInvest said IGB’s mixed development project in London would again see its launch delayed due to slower-than-expected approvals and hence likely to result in no launchings this year.