Following the successful reissue of the Nokia 3310 mobile phone classic last year, attendees at this year's Mobile World Congress in Barcelona were given another blast from Nokia's past: a refreshed Nokia 8110. And yes, you can play Snake on it. — dpa

TAIPEI: What the heck? FIH Mobile Ltd. managed to double revenue to a record, yet the smartphone manufacturer posted its deepest loss in history.

We’re talking about the Hong Kong-listed unit of Terry Gou’s Foxconn Technology Group that assembles devices for brands such as Xiaomi Corp. and Huawei Technologies Co., both of which had a fabulous 2017. FIH doesn’t make iPhones.

The first reason for this dichotomy in the P&;L is that India giveth and India taketh away:

Sales of the Group’s Indian operations in the current period were about 160% more than the same period in 2016 and this is due to the dramatic growth [in] business to a Chinese brand customer in India.

While not explicitly stated, that Chinese brand is most likely Xiaomi, and was one reason why FIH sales last year jumped to US$12bil.

FIH is also Gou’s nominated vehicle for investing in Snapdeal, an Indian e-commerce startup. As I discussed in August, that went pear-shaped and forced FIH to take a hit on its valuation. Back in May, FIH recognized a US$160mil impairment out of its total US$200mil investment in Snapdeal’s parent, Jasper Infotech Pvt.

Snapdeal and its rival Flipkart had once been in talks to merge, which is why FIH held on to the belief that its stake was still worth US$40mil -- valuing Snapdeal at US$983mil, should the transaction go ahead.

The negotiation was finally terminated due to dissent of minority shareholders and complicated tax problems between Singapore and India.

FIH now reckons Snapdeal is almost worthless and wrote off its remaining stake. It’s still assigning a token US$3mil to its 4.07% share -- which would value Snapdeal at a paltry US$74mil -- and will account for it differently.

One upside to FIH from this Snapdeal saga is that these losses are now over. The same can’t be said for its attempt to revive the Nokia brand name, which was a huge drag on earnings last year and probably into 2018.

In addition to its partnership with HMD Global Oyj, a Finnish startup stacked with former Nokia executives, FIH holds a minority stake in the company. HMD now owns the rights to the Finnish brand for use in smartphones, and my gut feeling is that a Nokia revival is a real possibility. Its handsets are nice, and both venture partners are throwing a lot of money and resources at it.

FIH’s geographical breakdown helps tell the tale of just how expensive a foray this is. Revenue for Europe -- where HMD/Nokia is based -- climbed nine-fold for the year, to US$1.6bil, yet the region plunged to a US$162mil loss. Such losses surely extend to Asia and Europe, but have been masked by profits from other brands such as Xiaomi.

Speaking of Xiaomi: I don’t imagine the Chinese startup will repeat the standout year it had in 2017. The company is prepping for an IPO, so it will do all it can to juice the numbers -- but 75% shipment growth in 2017 was an outlier, not a trend. FIH will likely find growth from Xiaomi rivals, but it’s going to need Nokia to become successful as soon as possible.

That’s a lot of pressure to put on a former superstar. Let’s see if that once iconic name can shine again.

This column does not necessarily reflect the opinion of Bloomberg and its owners. 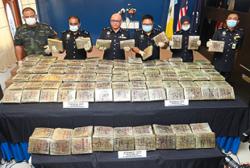