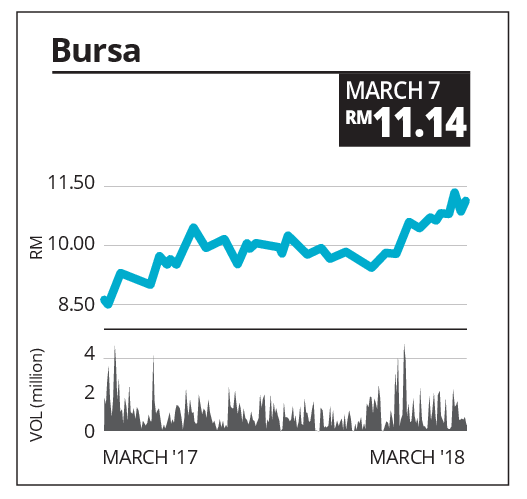 NEW capital market measures, a stronger ringgit, a stronger pipeline of initial public offerings (IPOs) and the upcoming general election are some of the key catalysts for Bursa Malaysia Bhd.

Affin Hwang Capital, which recently hosted a Non-Deal Roadshow (NDR) for Bursa in Hong Kong and Singapore, said investors were generally excited about the shares of the equity market regulator, as they viewed the counter as a beta play (being the proxy to the Malaysian securities market) and as a high-yield play.

Affin Hwang Capital noted that many investors have continued to monitor Bursa closely due to the strong start in the equity market average daily value (ADV), which was about RM3.16bil between Jan 2 and March 2, almost 25% higher than in 2017.

The brokerage reiterated its “buy” call, with an unchanged 12-month price target of RM12 based on 26 times 2018 estimated earnings.

According to Affin Hwang Capital, 2018 could turn out to be another robust year in the Malaysian equity market and potential catalysts such as the BURSA-SGX Trading Link (to be launched by end-2018) could boost the outlook for Bursa.

The brokerage said as investors continue to look for post-trade benefits of the BURSA-SGX Trading Link, this would likely be the key re-rating factor not just for Bursa, but for all other listed securities on the exchange.

At present, however, the missing links in the Malaysian market are a more diversified structured product offering (such as single stock options, additional stock index future, mini-derivatives contracts) and key domestic institutional investors being in the derivatives market (as a hedging tool), Affin Hwang Capital said. 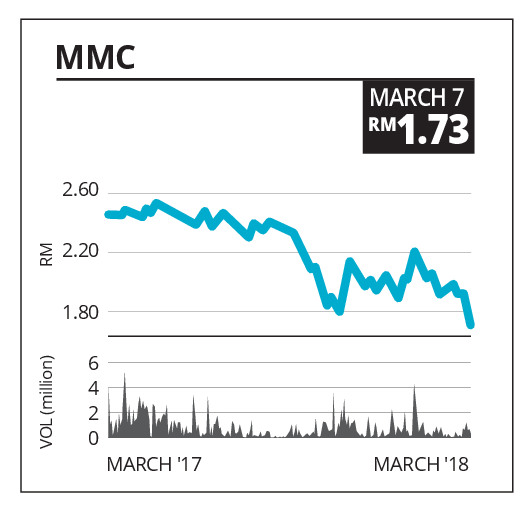 MIDF Research has maintained its “buy” call on MMC Corp Bhd with an unchanged target price of RM2.72, based on its sum-of-parts valuation.

The brokerage said its “buy” call was mainly predicated on the potential listing of MMC’s ports assets, expected synergies from the full acquisition of Penang Ports and a healthy construction order book of more than RM10bil.

MIDF Research, however, said there would be no changes to its valuation for MMC.

It noted that the concession extension would have a retrospective effect from the financial year ended Dec 31, 2013.

MIDF said MMC was confident, as stated in its annual report 2016, that the concession would be approved and had implemented Northport’s amortisation policy of intangible assets on the basis that the port operator would continue to manage port activities over the expected concession period of 30 years since November 2013.

MIDF said it had previously factored this into its model hence, no changes would be made in its valuation for Northport. 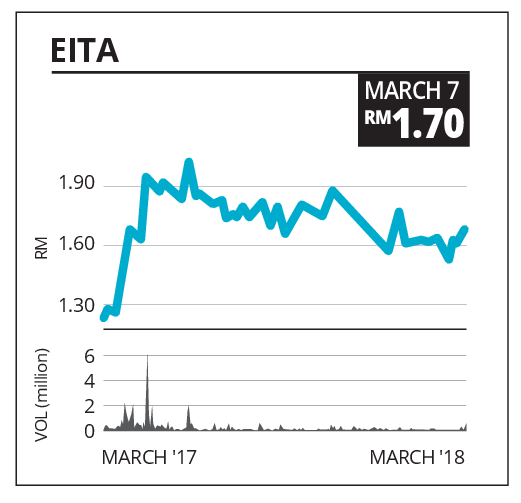 These add up to a total of 106 units of escalators and 95 units of lifts, which will be supplied and installed for three contracts amounting to RM126.2mil for the LRT3 project.

CIMB Research said it is positive on the development and did not expect EITA to win such a large job from LRT3 so soon after last week’s announcement that it had secured an RM80.6mil escalator contract for Package ESC (E) for Light Rail Transit Line 3 (LRT3) from Bandar Utama to Johan Setia, involving the installation of 114 escalators.

The research house pointed out that this month alone, EITA had secured a total RM206.8mil worth of jobs from the LRT3 project, the largest infra job ever for the company.

CIMB said EITA’s orderbook was at a record high of RM276.6mil, if it included the RM69.8mil job secured from the MRT2 project.

Coupled with its existing outstanding RM150mil orderbook from its other divisions, CIMB said EITA’s total outstanding orderbook is now at a record RM426.6mil, the highest ever for the company.

As at end December 17, EITA was in a RM36mil net cash or 28 sen net cash per share position. Given the LRT3 job wins, CIMB reckoned that EITA might raise funds from the equity market in the near future for working capital needs.

However, CIMB said EITA’s work could start on 2020 or even 2021, depending on when the main construction works are completed.

It explained that given EITA’s experience from the MRT underground jobs completed in 2016-17, EITA is well prepared to do the underground works for the LRT3 project.

CIMB remained its “add” call on EITA and maintained its earnings per share forecasts and target price based on 2019 forecast 12 times pric to earnings ratio (PE), which was a 20% discount to its target 15 times PE for construction sector.

It said the discount reflected its small market cap and indirect exposure to the sector.

The recent contract wins could catalyse its share price, but failure to win more infra jobs was a downside risk to its call. 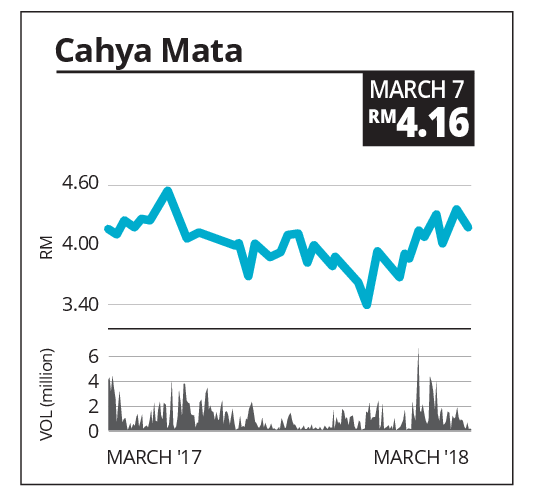 UOB Kay Hian Malaysia Research has revised up its 2018 earnings per share for Cahya Mata Sarawak Bhd by 15% to RM314mil, which is 17% above consensus forecast.

The research house said there could be a significant upside to its forecast, which conservatively assumes a lower base case for earnings from OM Holdings (OMH) and the Pan Borneo Highway (PBH)-related earnings stream.

UOB Kay Hian is of the view that the average selling price (ASP) is still stable at US$1,600 to US$1,800 per tonne and all 15 furnaces are running at full capacity.

It estimated that Cahya Mata’s 40% stake in Malaysian Phosphate Additives Sarawak (MPAS), which will be commissioned by second half of next year, will enhance shareholder value by 10%.

Just like in the case of OMS, the heavily energy dependent MPAS will derive much of its value by tapping into Sarawak’s cheap hydro electric supply.

This will be predominantly driven by a significant turnaround at OMS as well as an improvement in earnings across other business segments.

It added that Cahya Mata’s 2018 earnings could easily beat consensus net profit target of RM272mil, given that 2017’s core profit was already at RM262mil and factoring in the company’s conservative assumption of OMS’ net profit contribution of above RM50mil in 2018 (based on a well below market ASP of US$1,200 per tonne) versus a RM28mil loss in 2017.

As such, UOB Kay Hian said it has upgraded Cahya Mata to a “buy” call with a higher target price of RM5.20 (previously RM4.30) following a 15% earnings forecast adjustment for 2018.