JOHOR BARU: Johor Port Bhd, which comes under MMC Ports, will invest RM10mil to set up facilities at the Tanjung Bruas Port, Melaka, to roll out the country’s first roll-on/roll-off (RoRo) service between Malaysia and Indonesia.

Chief executive officer Shahrull Allam Shah Abdul Halim said the investment would be used to construct the Customs, Immigration and Quarantine (CIQ) at the port and ramp for the RoRo ships.

RoRo ships are vessels designed to carry wheel cargo such as cars, trucks, semi-trailer trucks, trucks, trailers, and railroad cars that are drive on and off the ship on their own wheels or using a platform vehicle, such as a self-propelled modular transporter.

Other than Johor Port and Tanjung Bruas Port, other ports under MMC Ports are Port of Tanjung Pelepas in Gelang Patah, North Port in Klang and Penang Port.

“We hope to start the service between the Tanjung Bruas Port and Dumai Port in Sumatra, before the end of the year,’’ he told reporters here yesterday.

Shahrull said this during the signing a memorandum of understanding between Johor Port and PT Pelabuhan Indonesia 1 (Pelindo 1), represented by human resources and general affair director Hamid Wijaya.

Pelindo 1, is one of the state-owned enterprises that manage ports services in western Indonesia in four provinces covering Aceh, North Sumatra, Riau and Riau Archipelago.

Aziz said the cost of transporting goods especially perishable items between the peninsula and Sumatra could be reduced and benefit consumers in Malaysia and the goods would be cheaper.

“Right now, it takes about five days journey starting from a farm in Sumatra to load and unload the goods onto a ship at Dumai Port, before its sales to Melaka,’’ he said.

Aziz said with the RoRo service, lorries carrying goods such as vegetables from Sumatra farms could drive directly onto the RoRo ship to sail to Melaka.

He said apart from catering for cargo, the RoRo service would also help to boost tourism sector in the peninsula especially in the southern region and Sumatra as the RoRo ship able to carry coaches and cars.

“In the pipeline is the RoRo service between Penang Port and Lhkoseumawe in Aceh for cargo transportation via Melaka Straits to cater for the northern states in the peninsula,’’ said Aziz. 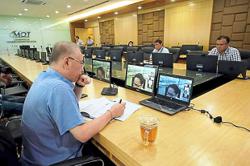 Wee: Ports are being cleared