THE dollar tumbled to a three-year low of 89.391 (against a basket of major currencies) on Thursday, having lost 1.30% of its value over the week after US Treasury Secretary Steve Mnuchin said that a weaker dollar is favourable for the US as “it relates to trade and opportunities”.

However, losses were capped after Trump said he wants a stronger dollar and that Mnuchin’s comments were taken out of context. Besides, the dollar was volatile earlier this week amid the three-day partial government shutdown. Also, some downward pressure came from lower Richmond Fed Manufacturing Index in January at 14 from 20 in December (consensus: 19), as well as the negative growth rate of Existing Home Sales at -3.6% m/m in December (consensus: -3%).

Brent crude oil surged 2.64% to a three-year high of US$70.42/barrel. This week saw further declines in US crude stockpile, specifically by 1.1 million barrels for the week ending January 2019, according to the EIA, dispelling concerns of increased US production hampering crude oil’s recovery. News that China intends to ramp up imports of oil for refining and re-export purpose also contributed to the price gain.

The euro rose 1.42% over the week to 1.2396 largely on the back of a sell-off in the US dollar. At the same time, the ECB kept its benchmark refinancing rate unchanged at 0% and reiterated the net asset purchases at a monthly pace of €30bil until the end of September, or beyond, if necessary. Also, Draghi attempted to limit expectations of a shift in the ECB’s policy in the near term while also reaffirming the strength of the eurozone’s economy.

The pound continued its rally for two consecutive weeks by 2.05% to 1.3858, supported by the softer dollar and increasing optimism of a Brexit transition period to be confirmed in the coming months. Besides, further impetus in pound came after better-than-expected labour market data where average earnings, excluding bonus in Nov, rose to 2.4% y-o-y from 2.3% y-o-y in October (consensus: 2.3%). However, some sell-off was seen earlier of the week after retail sales in December fell by 1.5% m/m from a gain of 1.0% m/m in November (consensus: -0.6%).

The yen gained on the back of the weaker greenback by 1.23% to 109.41. Japan’s inflation rate came in at 1% y/y in December compared to 0.6% y/y in the month prior, nearly meeting market consensus of 1.1%. To no one’s surprise, the Bank of Japan had left its policy rate unchanged at -0.1% last Tuesday, while simultaneously declaring its optimistic view that inflation will gradually pick up.

All Asia-ex Japan currencies strengthened against the dollar except the Hong Kong dollar and Philippine peso. The Chinese yuan and Thai baht were the best performers this week, having both gained 1.27% underpinned by the weaker dollar. Meanwhile, the Singapore dollar rose 0.78% amid the easing of December inflation to 0.4% y-o-y compared to 0.6% y-o-y in November. Also, the Indian rupee edged up by 0.61%, supported by a climbing foreign exchange reserves which currently stood at US$413bil as of Jan 12. The peso dipped 0.5% after 4Q GDP slowed down to 6.6% y-o-y from 7.0% y-o-y (consensus: 6.7%).

The tinggit seems to be relentless thus far, rising 1.35% to close at 3.8855 against the dollar on Thursday. The strong appreciation is supported by the highly anticipated rate hike by Bank Negara which was cemented on Thursday with the OPR elevated to 3.25%, followed by the upbeat tone by the central bank on the outlook and current macro fundamentals. At the same time, foreign flows into the KLCI amounted to a notable RM732.4mil over the week while the index ended at 1,847.02, which gave an additional boost to the ringgit. Meanwhile, inflation rate increased to 3.5% y-o-y in December from 3.4% the previous month, justifying Bank Negara’s rate hike decision.

The US Treasury yield curve rose on the shorter end while the 5- and 10-year yields fell over the week after members of the Senate managed to reach a deal to keep the US government open until Feb 8. Yields were further weighed down by Trump saying he wants a strong dollar, dismissing Treasury Secretary Mnuchin’s earlier contradictory comment. At Friday’s 11am pricing, the 2-, 5- and 10-year UST traded at 2.09%, 2.42%, and 2.62% respectively. 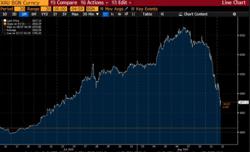 Gold falls below $1,900 level as US dollar, yields rise Gold hastens retreat, dips below US$2,000 on firm dollar