Consolidation: Employees work at an avocados packaging plant in the municipality of Uruapan, Michoacan State, Mexico. Globally, the food packaging industry is going through a consolidation phase, with a wave of M&A, such as that involving the world’s largest player Amcor Ltd, reshaping the playing field. — AFP

has had a good run over the last one year, with its shares turning out to be one of the outstanding performers in the local bourse in 2017.

But it is looking increasingly challenging for the counter to gain further momentum into the new year as the medium-term earnings outlook for the food packaging manufacturer turns cloudy.

A local fund manager, for one, says further upside is likely capped by now, as she expects the company’s earnings to come under pressure over the medium term.

“The longer-term prospects of the company may be bright, but for the time being, we think it has hit the speed bump... we expect the group’s net profit to be hit by narrowing profit margins and rising costs,” the fund manager with a local asset management company tells StarBizWeek.

“I’d say the trend is already evident, as the group’s bottom line has failed to perform and meet expectations in the last two consecutive quarters,” she points out, in reference to Tomypak’s results for the second and third quarters of its financial year ended Dec 31, 2017.

Tomypak is scheduled to unveil its fourth-quarter figures by the end of next month. 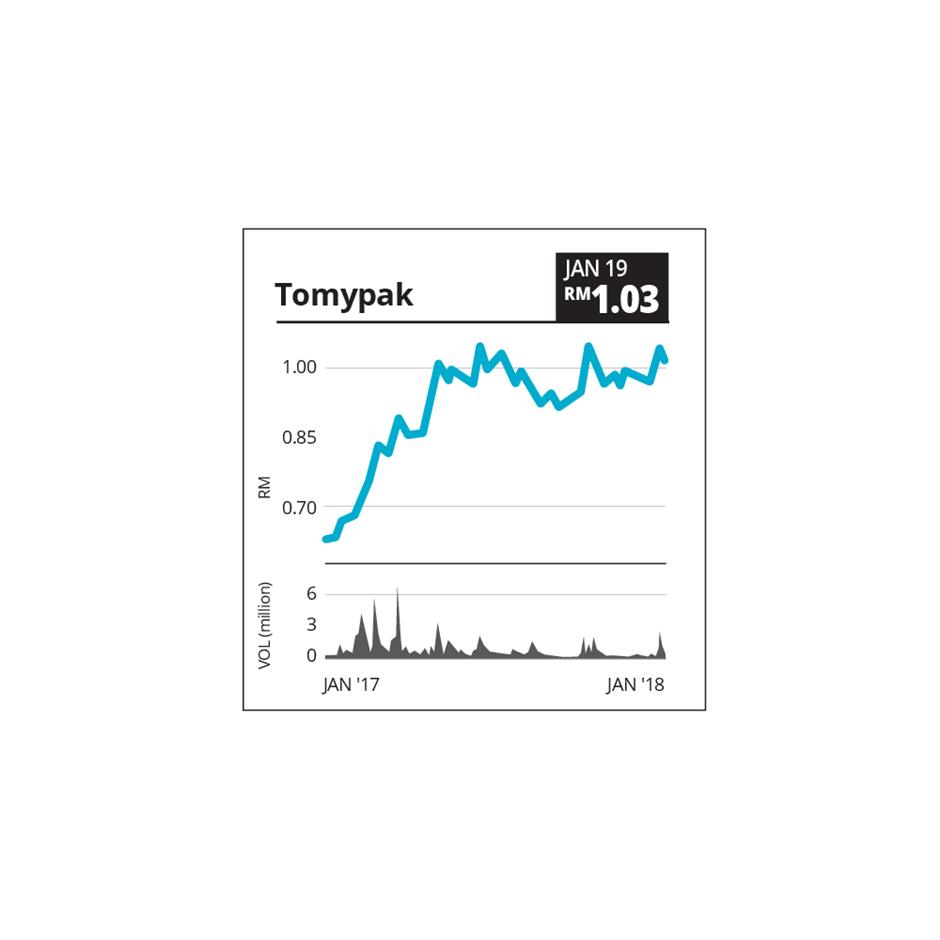 At current levels, Tomypak’s shares are trading at about 17.6 times the consensus estimated earnings for the group for 2018, and 13.8 times that of 2019.

According to an analyst, a risky earnings outlook for Tomypak in the medium term is expected to weigh down sentiment towards the company’s shares.

“We think the rally in Tomypak’s share price last year is due mainly to the group’s impressive first-quarter earnings, but going forward, we do not see any strong catalyst for its shares; we believe the market by now has already priced in much of the positives, including the group’s incoming capacity expansion,” the analyst with a local brokerage argues.

In addition, he says, the company’s earnings prospects “do not look so great” due to pressure on its profit margins.

“The group is faced with rising raw material costs and increasing operating expenditure. We think it is crucial for the company to quickly address its narrowing margins, otherwise, its bottom line will continue to be hit, and that will affect sentiment towards the stock,” he explains.

Meanwhile, a source close to the company contends that the challenges faced by the company are merely short term in nature, as the group remains focused on growing its business in the local and foreign markets.

He adds Tomypak has put in place various strategies to mitigate its earnings risk.

For instance, to counter the pressure on its margins and improve the group’s profitability, Tomypak is currently negotiating new deals with its suppliers, finding new ways of doing business with customers, and bringing in new equipment with the latest technology to improve costs, the source says.

“The company has implemented several initiatives to address its narrowing margins and rising costs.

“These involve working closely with all of its raw material suppliers and customers,” he says, noting that the co-operation so far has been quite fruitful for all parties.

In addition, he says, Tomypak also has a host of internal-efficiency-improvement strategies and action plans, and these involve being more innovative in the entire operation chain.

“The company remains on the forefront of research and development (R&D) for continuous improvement of its products and solutions for its clients ... this ongoing effort will not only help the company meets the stringent demand of its customers, but also helps the company improve its production efficiency and lower cost,” he explains.

The source, nevertheless, concedes there are inevitable challenges.

For instance, the strengthening of the ringgit does not bode well for Tomypak, as it could result in lower export orders and foreign exchange translation losses given the fact that its foreign sales are denominated in US dollar.

At present, export orders account for about 50% of the group’s revenue.

Globally, the food packaging industry is going through a consolidation phase, with a wave of mergers and acquisitions (M&A), such as that involving the world’s largest player Amcor Ltd, reshaping the playing field.

The source says Tomypak needs to have strategies in place to manage the changing landscape resulting from the wave of M&As in order to compete for effectively with the big boys on the global scale.

Locally, he says, Tomypak will also have to be mindful of the likelihood of global big boys entering into the Malaysian market as that could result in stiffer competition in an already smallish market.

According to an estimate by Maybank Investment Bank Research (Maybank IB), Tomypak at present controls about 35%-40% market share in the country based on revenue, while Daibochi commands an estimate market share of 55%-60%.

As a group, Tomypak is involved in the manufacture and marketing of flexible packaging materials, principally for local and international food and beverage (F&B) companies.

It is noted that about 99% of Tomypak’s customers are from this recession-resilient F&B sector.

Among its customers are reputable brands such as Nestle, Unilever, Ajinomoto, Kraft Foods, Mamee and Apollo.

“Tomypak will remain focused on building its business in the F&B sector... what’s positive for the company is that it offers quality printing and packaging materials that adopt the highest standards in the industry,” the source says.

“While this will undoubtedly cost more for Tomypak, the initiative is expected to set a high barrier of entry to fend off competition, while enabling it to meet the meet stringent requirements of its customers, particularly the multinational companies,” he adds.

Tomypak’s revenue at present is divided almost equally between its domestic and overseas markets.

Tomypak at present has a total installed capacity of 25,000 tonnes from its two production plants Tampoi and Senai in Johor.

These two plants have a combined floor space of more than 410,000 sq ft, which is sufficient to cater for the group’s expansion strategies over the next five years.

Currently in the midst of installing new printing and laminating lines as well other ancillary and supporting equipments, Tomypak is expected to double its production capacity in the next two years.

The group expects its infrastructure investments to improve efficiency, which will eventually be translated into better operational margins.

According to Maybank IB, Tomypak’s expansion plans, as well as continuous quality improvement, will provide the group with the much-needed impetus to increase its market share and earnings growth.

Maybank IB has a “buy” call on Tomypak, with a target price of RM1.05 based on 16.5 times the brokerage’s estimated 2018 earnings for the latter.

Despite Tomypak’s disappointing results for the nine months to September 2017, Maybank IB says it believes the company remains poised for robust earnings growth over the next two years on higher sales from both local and overseas, and better productivity.

“We believe the higher operating costs for 2017, particularly from the new plant, pave the way for better earnings growth going forward,” MaybankIB writes in its recent note on the company.

The brokerage says it expects Tomypak’s sales to accelerate after obtaining certification of standards.

Citing Euromonitor’s report, MaybankIB says global consumption of flexible F&B packaging products is expected to grow at a compounded annual growth rate of 2.7% (food) and 3.8% (beverage) between 2016 and 2021.

Kenanga Research, however, is less optimistic.

The brokerage recently downgraded its call on Tomypak to “underperform”, with a lower target price of 80 sen based on 18.3 times its estimated 2018 earnings for the latter.

“Although Tomypak’s bullish capacity expansion plans of 89% up to 2020-2021 is a positive, we believe valuations are stretched currently, warranting an ‘underperform’ call as recent quarters have been uninspiring, with weaker-than-expected margins,” Kenanga Research explained in its report dated Nov 24, 2017.

“As such, we opt to be conservative by pricing in earnings risk for now, but we may look to upgrade our earnings and call upon more concrete margin improvements,” it added.

In a separate note published this month, Kenanga Research pointed for plastic packaging manufacturers such as Tomypak, in the near term, earnings growth, if any, will come primarily from margin expansions.

“This is premised on better cost efficiency and product innovations that could bump up margins as plastic manufacturers look to sell more niche and higher margin products,” the brokerage said.

Tomypak posted a net profit of RM13.43mil for the nine months to September 2017, up about 11% from RM12.12mil in the corresponding period in the preceding year.

Consequently, the group’s earnings per share rose to 4.91 sen from 4.43 sen previously.

During the period in review, the group registered a lower revenue of RM158.91mil, compared with RM159.74mil previously.