Exchange 106 shaping up to be the tallest

Sky view: Artist’s impression of the sky lobby or observation deck at level 57 of The Exchange 106.

Mulia Group boss prefers to let his building do the branding

WHAT does the world’s community of successful entrepreneurs offer?

The man behind Indonesia’s Mulia Group likes to remain in the background. Instead, he prefers his buildings to be known. In short, he wants to brand his buildings.

When a property developer wants to do that, the building has to be in a class of its own as there is no point in branding the ordinary.

And so from selecting the grains on the marble slab that will adorn Mulia Group’s only investment in Malaysia, The Exchange 106, to his construction strategy to get the building up as speedily as possible, Eka Tjandranegara, Mulia Group’s president director prefers the hands-on approach.

Mulia’s building will be Malaysia’s tallest, at 492m, about 40m higher than Petronas Twin Towers.

Says a source: “Eka is very hands on.”

He is also very decisive. There was a time when prices of glass and steel were going up.

He started his own ceramic and glass factory and today is an exporter of glass products.

When the property sector was slow, he made forays into China’s infrastructure sector.

The 106-storey structure is scheduled to have a grand opening in the third quarter of this year. Although the 70 acres it is located on is still a construction site, Savills Malaysia said the building will be ready for occupation while the other parts are being developed.

There will be access, says Savills executive chairman Christopher Boyd. Posh entrance: The entrance and drop-off point to Exchange 106

Mulia Property Development Sdn Bhd has engaged the services of property consultants to lease the building. It is also working hard to find prospective tenants.

Property consultants are introducing it as “the most’s most luxurious office skyscrapper”.

Mulia Property Development, the developer, is a subsidiary of Mulia Group of Indonesia. It is seeking office rental of RM17 per sq ft (psf), the highest in Kuala Lumpur, which brings it into a class of its own.

Leasing opened about a year ago and is currently from level 62 onwards.

Those who have formally signed up are “big space users” and are predominantly from local financial and lending sector, according to a source.

They take up between two and eight floors.

At RM17 psf, it is needful to make some comparisons.

Below the super prime level will be the Grade A buildings, where rental is between RM7.50 and RM8 psf.

The Klang Valley is also having an over supply of office space with overall vacancy rate at about 20%. Some are slightly more than half occupied.

Against this backdrop, Savills Malaysia executive chairman Christopher Boyd says the various incentives and favourable tax practices in the Tun Razak Exchange (TRX) is equivalent to about RM2 psf.

There are other incentives, like tax deduction for relocation costs, rental expenses for up to 10 years but as with all incentives, there are deadlines.

Those who qualify must undertake whole or part of their business in TRX before Dec 31, 2020, according to TRX’s website.

In terms of aesthetic and quality of finishes, The Exchange 106 is expected to be second to none. A release from Mulia Property Development said The Exchange 106 is bench-marked against international properties such as The Shard, buildings in Canary Wharf, both in London, New York’s One World Trade Centre and Shanghai IFC.

Comparisons are made on column-free office area efficiencies, 70% for London’s The Shard, and in excess of 90% for The Exchange 106 based on revenue generating space in relation to service areas. 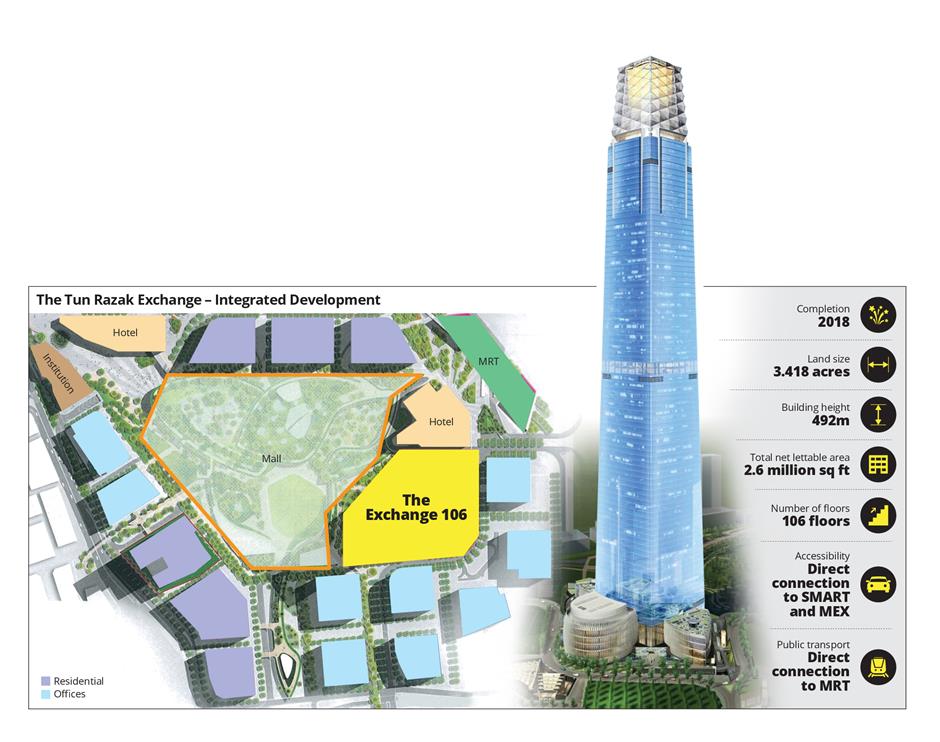 Other comparisons include quality of finishes, certifications like Green Building Index and Multimedia Super Corridor, and floor to ceiling heights, the release said.

The Exchange 106 positions itself as “the most luxurious office skyscraper in the world”. At present, there is “no equivalent” in Kuala Lumpur.

Exchange 106 will put Kuala Lumpur on the global office sector scene as a major although its rental is nowhere near the most expensive rentals in the world... The Shard at US$121 psf a year, One World Trade Centre at US$75 psf a year, Shanghai IFC and Exchange 106, both at US$50 psf a year.

Mulia will also manage the property itself.

How it came to be

History is important, especially for an iconic project.

Until today, it is uncertain on what terms Mulia Group, in 2015, bought that 3.42-acre centrepiece that Exchange 106 is located on.

At that time, 1MDB Real Estate Sdn Bhd (1MDB RE) was looking for buyers for its tracts of land in the TRX.

Some of the land deals there with government agencies or institutions were scrutinised heavily because of the land’s link with 1MDB.

There was an earlier potential buyer for that site, then known as Signature Tower, but the deal fell through.

So when Mulia Group came in, there was speculation that a foreign party was being roped in to help. Mulia bought that centrepiece for RM665mil, or RM4,490 psf.

According to reports, the earlier prospective buyer was promised two things.

One, 1MDB RE, now TRX City Sdn Bhd, would lease the completed building for five years at a net yield of 5.5% on the actual total development cost incurred.

Two, it would help secure tenants.

Its presence, together with Australia’s Lendlease, who bought 17 acres earlier to build an underground mall, boosted TRX’s viability as a financial district and counterbalanced some of the negative undercurrents.

Today, all that is history. But interestingly, last week, it was reported that the Ministry of Finance Inc (MoF) has taken a 51% stake in Mulia Property Development.

It is not known at what price MoF is buying that 51% stake. However, it was reported that the Mulia Group was looking at some RM1.8bil in financing from Malaysian banks in 2016 for the development of the building. It is not known whether it had any success with that.

For a country with a population of some 31 million, Malaysia now has two iconic buildings, the Petronas Twin Towers, which is associated with former Prime Minister Tun Dr Mahathir Mohamad, and The Exchange 106, with the current Prime Minister Datuk Seri Najib Tun Razak, in a financial district named after Najib’s father Tun Abdul Razak, Malaysia’s second prime minister.