Ringgit on uptrend: People queuing up to change money at a money changer. The ringgit has broken past the crucial 4.00 level.

THE New Year is in, tides are changing and the ringgit is recovering from the past two year’s extreme blues.

The long-awaited reprieve has finally come for certain consumer companies that import intermediary goods for their production cycle.

Foreigners who have taken advantage by accumulating and buying into the equity and/or bond market when the ringgit was at a weaker level last year, would be firmly in the money now.

Analysts see the local currency as now being on a cruise control climb mode moving to new highs in the past week and possibly in the near future.

They note that the foreign buyers would see two-way gains and would be able to realise their gains if they choose to.

“If they liquidate and take the money out they will realise the gains and benefit. Last year the ringgit strengthened by almost 10.4%. Ringgit already broke the crucial 4.00 level, assuming that they make money from the market and take it out, they will also pay less to convert to US dollar,” Socio Economic Research Centre’s executive director Lee Heng Guie tells StarBizWeek.

The ringgit had seen a gain of 0.64% after we entered the New Year, adding to its gains that was achieved in the past two months of 5.63%.

Currency strategists agree that the next crucial psychological mark would be the 3.80 level that is the infamous currency peg level some years after the 1997 Asian Financial Crisis.

The recovering oil prices with the lifting of equity markets due to strong global sentiment aided gains in the ringgit, Lee says.

The FBM KLCI saw a strong upward move as investors celebrated Christmas and ushered in the New Year thereafter.

Meanwhile, the other companies that will stand to gain are consumer-driven companies especially those that have imported intermediary goods to manufacture or complete end products.

Lee says the strengthening ringgit, if it is sustained, would eventually help to boost the consumer sentiment index (CSI). In the latest reported third quarter of 2017, the Malaysian Institute of Economic Research (Mier) said the CSI continued to remain weak with the index having retreated further to 77.1.

“Anxieties over higher prices grow and (there are) burly spending plans amid waning incomes and jobs,” the Mier said at the release of third quarter CSI figures then.

Any CSI level below the 100 indicates weakness on the consumer front.

Lee says he is hopeful the stronger ringgit would help eventually translate to additional cost savings to the consumer in the form of lower prices.

He notes that the gainers among the consumer companies would mainly be those which derive their sales from the local market and have imported intermediary goods in the supply chain.

“On average, the companies that import their raw materials lock in the prices through forward contracts for the upcoming six months. So, if there are any gains to their profit margins, it would be seen in the second half of the year,” he says.

All three stocks have been making strong gains in their share prices last year despite their high base.

Observers note that a common theme today that belies these stocks are that they derive their sales from the local market, with minimal or zero exports. Hence they will benefit from strong gains should the local currency appreciate further.

“Their raw materials that form a big part of their production are ingredients such as milk, coffee and sugar which are not readily available locally. They need to be imported and these are denominated in US dollar,” an analyst with a local research outfit says.

Two of those stocks that were mentioned above topped the gainers list on Friday: Nestle rising by RM1.20 to a new historical high of RM103.80 and F&N hitting an all-time high of RM27.82.

Investors may also want to train their sights on the smaller-capitalised consumer stocks some of which had been at a disadvantage earlier due to the weakened ringgit.

The stocks in this space include Apollo Food Holdings Bhd 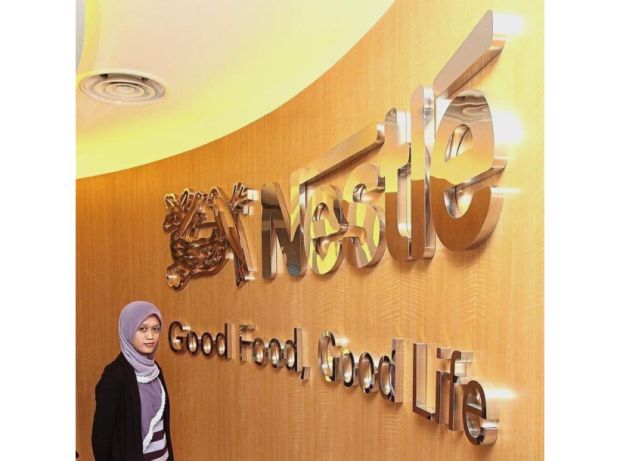 Better profit: Nestle Malaysia is one of the companies gaining from a strong ringgit.

Apollo Food, the maker of packaged confectionery products see a big part of their sales being derived locally and their food is usually stocked in the school canteens.

The company’s second quarter profit had dropped by 11.1% to RM3.82mil primarily due to the lower ringgit then compared to the same quarter a year ago.

When the ringgit was trading above the 4.00 level then, the company had said in its prospectus that its operating environment was more challenging due to the increase in costs of raw materials.

Meanwhile, Berjaya Food Bhd could see further gains ahead as the ringgit continues its ascent.

The company owns half of the popular Starbucks franchise in Malaysia beside owning the worldwide Kenny Rogers Roasters franchise after acquiring KRR International Corp of the US in April 2008.

AmInvestment Bank Research said last month that it believed the worst is over for Berjaya Food with KRR’s robust same store sales growth following the disposal of KRR Indonesia.

The research house had highlighted that Berjaya Food would benefit from a stronger ringgit.

AmInvestment Research maintained its buy recommendation on Berjaya Food with fair value of RM1.91 per share.

“Valuations are pegged to a PER of 25 times FY19 forward, reflecting a 20% premium to its historical valuations. We think that it is justified as Berjaya Food has significantly enhanced earnings visibility following the disposal of KRR Indonesia, attractive growth off a low base and a stellar Starbucks brand,” it says.
Article type: metered
User Type: anonymous web
User Status:
Campaign ID: 1
Cxense type: free
User access status: 3
Subscribe now to our Premium Plan for an ad-free and unlimited reading experience!