In 2017, while the FBM KLCI may have been the second worst performing Asian stock index, after China’s Shanghai Composite, it’s not all gloom and doom.

The Malaysian equity market did in fact do fairly well when compared with three years of negative growth between 2014 and 2016.

Foreign investors have pumped in a net amount of RM10bil into Malaysian equities this year, the highest compared with other countries in South-East Asia.

While RM10bil may seem a huge figure, it should be compared with the total foreign fund outflows from Malaysia’s equity market of RM29.7bil from 2014 to 2016.

In 2016, there was a net foreign fund outflow of RM3.2bil from Malaysian equities, but this was mild compared with the bloodbath that hit the market in 2015, the year in which foreigners took out a net amount of RM19.7bil from the market.

Net outflow of foreign funds in 2014 was recorded at RM6.8bil.

As for the ringgit, many point to it being an unseen gem and can no longer be ignored by investors in 2018.

The currency depreciated by about 35% against the US dollar from January 2014 to September 2015.

According IMF PPP metrics, the ringgit remains significantly undervalued – by more than 60% to the greenback.

The ringgit has gained almost 10% this year, trading at 4.05 per US dollar, making it one of the best performing currencies in the region.

“The Malaysian ringgit benefits from an attractive long-term valuation and from higher commodity prices.

“But there is some lingering political risk around next year’s election,” says Schroders Investment Management Ltd in a report.

The strong pick-up in foreign investments in Malaysian equities could continue into 2018, as global fund managers’ appetite for emerging markets are expected to remain strong, driven by economic growth and low inflation rates.

For instance, according to a Bloomberg survey of 20 investors, traders and strategists, bonds and equities in developing countries will continue to streak ahead, outpacing their developed-nation peers in 2018.

These funds will especially go into local bonds and specifically into countries with higher real yields such India, Indonesia, China and Malaysia.

“We expect bond markets of more developed countries to perform only somewhat better than the US bond market.

“Taiwan, Hong Kong and South Korea bonds should be more range-bound,” it says.

It is worth noting that most of the fund inflows into the local equities market took place in the first half of 2017.

In the second half of the year, foreign investors turned into net sellers.

During the first half, optimism in the market was fuelled by the possibility of an early general election.

But, that has changed in the second half of the year, which saw the FBM KLCI trading sideways while regional peers had recorded double digit growth.

However, the FBM KLCI saw a spike two weeks before the year end, which dealers attribute to window-dressing activities.

This year, the KLCI is up by approximately 9.7%. 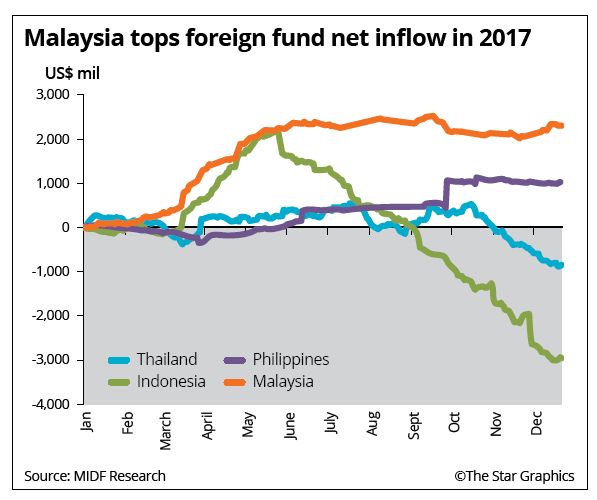 Other markets such as the Hang Seng in Hong Kong and Kospi in South Korea and Jakarta Composite in Indonesia are up more than 30%, 18% and 15%, respectively.

Analysts reckon that mild growth in Malaysian corporate earnings, coupled with uncertainties stemming from the upcoming general election, are making investors stay on the sidelines.

The robust economic numbers, which saw Malaysia’s economy grow 6.2% in the third quarter of this year, the fastest pace since 2014 and the Budget 2018 announced in October did not manage to nudge the market.

CIMB Research expects local and foreign investments to improve in the second half of 2018, post-General Election 14 (GE14).

“Factors that could boost market prospects in the second half of 2018 stem from a potential relief rally and increased foreign funds inflow into Malaysia post-GE14; better corporate earnings; a slew of construction job awards and potential Chinese investments; and IPO activities picking up pace post-GE14,” CIMB Research says.

Both MIDF Research and AmBank Research have forecasted the FBM KLCI to rebound next year to as high as 1,900 points.

It rates emerging-market equities as “overweight”, noting economic reforms, improving corporate fundamentals and reasonable valuations as well as above-trend expansion in the developed world as the positive factors.

However, it considers a sharp rise in the US dollar, trade tensions and elections as potential risks.

“We see scope for more emerging market rerating in 2018, whereas the US and Europe have much less headroom. 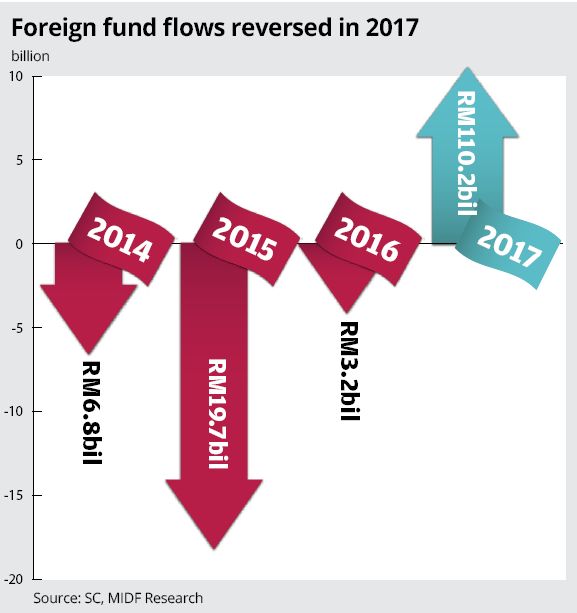 “Other reasons to like emerging markets: reform progress in key markets and plenty of capacity for investors to increase exposure after years of underweighting the asset class,” BlackRock said in a recent report.

“We see the greatest opportunities in EM Asia, but note positive progress in Brazil and Argentina.

“We do not see moderate Fed tightening or US dollar gains harming the investment case,” the fund manager, which has US$5.7 trillion (RM23.26 trillion) assets under management, adds.

On Asian equities, in particular, BlackRock also has an “overweight” rating, citing the encouraging economic backdrop.

“China’s growth and corporate earnings appear solid in the near term.

“We like selected South-East Asian markets but recognise a faster-than-expected Chinese slowdown would pose risks to the entire region,” it explained.

“Global emerging markets continue to offer attractive investment opportunities even after the strong performance seen in 2017.

“Many of these markets are in much better shape today, boosted by the ongoing progress of meaningful economic and political reforms in key developing countries.

“Many of their traditional vulnerabilities, such as large current account deficits and low inflation-adjusted interest rates, have markedly improved,” says T. Rowe, which manages around US$810.8bil in assets under management.

According to T. Rowe, while valuations for both equities and bonds in emerging markets are not as compelling as they were a year ago, following 2017’s strong performance, these risky assets “remain attractive relative to their history and to most developed markets”.