The appointments should quell speculation of external candidates replacing Azman, whose three-year employment contract at the government strategic investment fund is set to expire in May next year.

“In addition to the ongoing review of historical performance as well as strategy and budget for 2018 and beyond, the board at its meeting also resolved several board-level and senior management appointments, as part of its ongoing governance and succession planning process,” it said.

Khazanah has also announced the appointment of Tan Sri Md Nor Yusof as chairman of its board executive committee effective Dec 5.

“A streamlining of some of the human capital oversight functions of the exco and the board committee for succession management also saw the formation of a board nomination and remuneration committee to be chaired by Md Nor Yusof, with immediate effect,” it said.

The new appointments, Khazanah said, supplement its ongoing institutionalisation efforts as it continues to move forward in delivering its mandate as the strategic investment fund of the Government.

It also signalled that Azman was not seeking to extend his current contract after 13 years on the job. He was first appointed to lead Khazanah in June 2004.

The internal candidates promoted by Khazanah have their own impressive resumes.

Zulkarnain, 45, is currently an executive director with coverage of Khazanah’s investments in Asean and the financial institution group sector.

He is also the fund’s head of the strategic management unit. The former CEO of Danajamin Nasional Bhd is a graduate in economics from Harvard University in the US.

Meanwhile, Tengku Azmil is also an executive director with oversight of Khazanah’s investments in the innovation and technology sector as well as life sciences.

His coverage includes Africa, the fund’s offices in San Francisco and Khazanah Koridor Utara in Penang. The 47-year old was previously the CEO of Malaysia Airlines and has also served in various roles with PricewaterhouseCoopers in their

Meanwhile, Khazanah also announced the appointment of Tan Sri Andrew Sheng, a board member since July 2008, as chairman of Khazanah Research Institute, with effect from Nov 29.

The fund also appointed Yeo Kar Peng, the chairman and managing partner of Kendall Court Capital Partners, as a board member effective Dec 5. 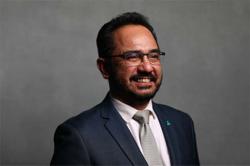