PETALING JAYA: The Tan family is one step away from completing its plan to consolidate Goldis Bhd and IGB Corp Bhd

into a single listed company.

The plan to take the firm private received near unanimous approval from the shareholders of IGB Corp during a meeting, with 99.34% of them voting for the proposal.

Goldis is a property investment company that is controlled by the Tan family, and led by Datuk Tan Chin Nam.

“Now that shareholders have given the green light, we need the board’s consent to proceed further,” Goldis chief investment officer Colin Ng told reporters after the court-convened meeting yesterday.

IGB Corp will become a unit of Goldis, after which Goldis plans to change its name to IGB Bhd to reflect the larger, combined group.

Ng said the exercise was aimed to de-layer the corporate structure between Goldis and IGB for more efficient management.

“With a bigger balance sheet post-takeover, Goldis will be able to undertake more robust development moving forward,” he said.In a separate development, IGB Corp reported a net profit of RM62.6mil for its third quarter to end-September, a 57.7% drop from the same period a year ago. Revenue also fell 20% to RM259.7mil during the quarter.

The group said the lower revenue for the period was due to lower contributions from the property development and hotel divisions.

The property development segment was affected by a slowdown in the sales of condominium units, while the hotel division saw lower revenue due to the one-off gain of RM23.2mil from the sale of the Renaissance Kuala Lumpur Hotel a year ago.

In a filing with the stock exchange, the group said the drop in pre-tax profit was mainly due to a one-off gain of RM136.2mil from the sale of Micasa Yangon, recognised in September 2016.

The group also noted that revenue for its property development division for the nine months to Sept 30 had decreased significantly as the group had not launched any new development projects in view of the persisting weak sentiment in the property sector.

In the property investment division, the office towers in Mid Valley City mostly achieved average occupancy rates of above 90% during the period.

The group’s retail division, represented by IGB REIT, reported a total gross revenue and net property income of RM390.6mil and RM278.4mil, respectively, a steady increase of about 2% and 3%, respectively.

IGB Corp and IGB REIT hold the prized assets of the group, while the Tan family’s interest is mainly concentrated at Goldis.

IGB’s assets include Mid Valley City, and a 52.3% stake in IGB REIT, which, in turn, owns Mid Valley Megamall and The Gardens Mall.

This is the first time Goldis has attempted to take IGB Corp private, following two other restructuring attempts in recent years.

In May 2013, Goldis proposed a merger exercise with IGB Corp, in which it proposed to distribute the shares it held in the company to shareholders. The exercise did not take place.

Over a year later in August 2014, Goldis proposed a voluntary general offer, with the objective of increasing its stake to over 50%. Goldis then ended up with a 73.32% stake in IGB Corp.

In February this year, Goldis proposed the current takeover of IGB Corp at RM3 per share offering shareholders of the property developer three options, at RM3 per share.

The three options are – either take all cash, a combination of cash of 90 sen and RM2.10 in Goldis shares, or receive cash of 36 sen and new redeemable convertible cumulative preference shares. 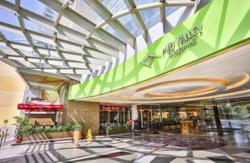