Thai and Malaysian government representatives are expected to meet in the next few weeks to dwell on the subject, he said, adding that the proposal was mooted by a company which is said to be related to a renowned Malaysian tycoon with a link to the Penang Port.

This idea will benefit both ports as they can serve as transit ports before goods are shipped to international destinations, he told a media briefing on the Malaysia-Thailand trade and investment ties in Kuala Lumpur on Thursday.

This proposal is new and unheard of other than the multi-billion dollar Kra Canal plan, which was tossed as early as 1677 but was not taken up due to cost and environmental concerns.

With renewed interest in the canal plan from Thailand, if it were to materialise, the canal could pose a challenge to ports along the Straits of Melaka such as Port Klang and Tanjung Pelepas Port, as well as the Singapore Port.

The proposed Penang-Songkhla rail line is expected to shorten the transit time of shipment of goods to nine hours compared to nine days via the Straits of Melaka.

Commenting on the Malaysian-Thai relations, Damrong said Thailand had been overlooked by Malaysian business leaders despite its vast opportunities and infrastructure.

“For instance, Thailand has road access to China, and other Indo-Chinese countries, which would benefit Malaysian businesses,” he said. 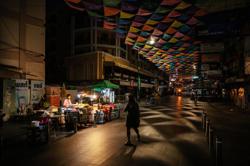