TOKYO: Japan’s economic growth in the second quarter was much slower than seen in a stellar preliminary reading, government data showed on Friday, confounding hopes for a long awaited pick-up in domestic demand.

While the disappointing data may weaken confidence in the government’s economic policies and the business outlook, analysts still expect the economy to sustain a steady recovery as robust global demand underpins exports and a tightening job market improves the prospects for higher wages.

“There’s no need to be pessimistic about Japan’s economy.

Japan’s economy expanded at an annualised rate of 2.5% in April-June, much less than an initial estimate of 4.0% growth, Cabinet Office data showed.

While it was lower than a median market forecast for a revision to 2.9% growth, the economy still managed to post a sixth straight quarter of expansion.

Japan’s GDP data tend to experience big revisions due to the way the Cabinet Office estimates capital expenditure, consumption and inventory in the preliminary reading.

The downgrade in annualised GDP growth, which was the biggest since comparable data became available in 2010, was largely due to a sharp markdown in corporate capital spending.

The quarter-on-quarter pace of rise in capital expenditure was revised down to 0.5% from an initial reading of 2.4%, reflecting data that became available after the release of preliminary GDP.

Private consumption, which makes up 60% of GDP growth, rose 0.8%, roughly unchanged from the preliminary 0.9% increase, the data showed.

The data follow a recent run of indicators that suggests economic growth should continue in the current quarter thanks to solid exports and factory output.

“July data on industrial production and consumer spending point to a slowdown in the third quarter. But the bigger picture is that the economy is on track for the seventh consecutive quarter of expansion,” said Marcel Thieliant, senior Japan economist at Capital Economics. 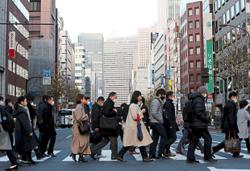