Industry sources said BTVM and Astro have disagreements over several issues that could possibly lead to legal suits.

’s exclusivity as the sole satellite pay-TV operator in the country has come to an end, as it will soon face competition from a new cable TV operator called Ansa Broadcast.

Hong Leong Investment Bank (HLIB) said its channel checks revealed that a new player in the form of Ansa Broadcast is in the midst of entering the satellite pay-TV segment.

According to the research house, Ansa Broadcast was previously known as U-television, a cable TV operator that is a subsidiary of tycoon Tan Sri Vincent Tan’s Berjaya group.

“While details remain scarce, we understand that Ansa is currently deciding which satellite solution to adopt, either to lease bandwidth from operators or launch its own satellite. Implementation may take some time before service is officially launched,” it said in its report yesterday.

With Ansa’s entrance as a new direct-to-home (DTH) satellite player, Astro will face the pressure which had been absent for past 20 years. Astro’s exclusivity clause finally ended in February 2017.

While many non-satellite broadcasters such as ABNXcess, MiTV and Mega TV had failed historically, Ansa Broadcast is not expected to be an overnight success but it can be disruptive, offering aggressive pricing and content variances, HLIB noted.

The research firm has downgraded Astro to a “hold”, with a lower target price of RM2.47 from RM2.98 based on a discounted cash flow valuation.

“Astro is facing dismal advertising expenditure (adex) growth due to weak consumer sentiment. Besides, the challenging business environment from aggressive shifts in the media platform from traditional to digital is leaving the company in a tough position,” it added.

According to HLIB, Astro is reportedly seeking fair ground against the over-the-top (OTT) players in Malaysia and wants these players to be regulated by the Communication and Multimedia Act 1998.

“Astro believes that with a level playing field upon regulation, it will be in a better position, as it owns most of the broadcasting rights in Malaysia.” 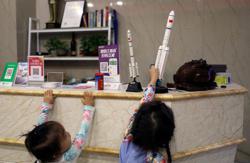