PUTRAJAYA: The upcoming Budget 2018 places more emphasis on the need to provide tax incentives that focus on the development of the fourth industrial revolution (Industry 4.0).

Second Finance Minister Datuk Johari Abdul Ghani said this would be in line with the Government’s effort to promote high-technology industries and minimise dependency on manpower.

“These include sectors involved in automation, robotic development, big data and others which are being promoted by the Government,” he said.

Johari said the Government could no longer provide tax incentives for every sector, and it needed to focus on the current situation, taking into account the country’s present and future needs.

“We can no longer provide incentives to all industries; it now depends on the flavour of year and the flavour of the future,” he told reporters after chairing the Budget 2018 Focus Group Meeting: Boosting Private Investment in Putrajaya on Thursday.

The budget will be presented in Parliament by Prime Minister Datuk Seri Najib Tun Razak on Oct 27.

Johari said the proposed tax incentives were part of the government’s efforts to attract more industry players to participate and invest in Industry 4.0.

Commenting on remarks that local investors should not be too carried away with the large and exciting Chinese market, Johari said the world could not avoid doing business with the US and China as their gross domestic product was over US$18 trillion and US$11 trillion, respectively.

Malaysia is in a strategic position to leverage and capitalise on China’s economic growth, he said, adding that China contributed 16% of Malaysia’s total trade of RM1.5 trillion, while the US, 9.3%.

However, he noted that the two countries were not the main focus for Malaysia’s trade activities, as the country also has good trade ties with Asean countries, European countries, Japan, and South Korea.

Asked if China is Malaysia’s first choice investor in the country, Johari said Chinese investments were more focused and met the needs of the current national development projects.

“As we can see, China is actively investing in many countries and they come to Malaysia to make investments which are tailored to the country’s much needed development,” he added. - Bernama 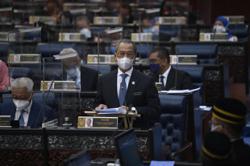