Chuah: ‘We will market the product under a new brand name called Acilis and position the product as an upper mid to premium product so that it will be feasible to sell there. Main methods to market will be through online channels and it will also be available on the shelves of premium stores.’

has started exports of its mineral water to the United Kingdom and hopes the country will eventually be a springboard for it to penetrate into Europe.

Its executive director Chuah Chaw Teo tells StarBizWeek that the company will be working through an exclusive distributorship model with Link-Us Associate UK.

“We will market the product under a new brand name called Acilis and position the product as an upper mid to premium product so that it will be feasible to sell there.

“The main methods to market will be through online channels and it will also be available on the shelves of premium stores,” Chuah says.

“We hope to be able to achieve at least two to three containers per month initially.

“A container can contain up to 26,000 bottles. I am actually quite happy with this partnership because the distributor will buy the products from us first and sell it on their own,” he adds.

He says the UK Trading Standard has also allowed this product to be labelled in the country as possessing anti-aging properties that encourage softer skin, stronger nails, shiny hair and supple joints due to silicon enhanced promotion of natural collagen in the body.

“We think this will be our competitive edge as we won’t be competing with the cheaper bottled water brands there.

“As proven in research by Keele University, it also helps in the removal of aluminium in the body - which is a known neurotoxin as a result of life-long exposure to the metal in food, tap water, cosmetics, medications and environmental air pollution from car exhaust and cigarette smoke,” Chuah says.

“Research shows that continued removal of aluminium from the body can help prevent Alzheimer’s Disease. Also nowadays people are more open to these alternatives to mainstream healthcare options,” he adds.

Chuah notes that Spritzer has been getting a growing number of enquiries for the mineral water from that part of the world in the UK and Europe.

“Our unique selling points makes it feasible to sell the product there. Fiji water from Fiji Island is also (being sold) in the US and Europe and they continue to be successful,” he says.

Exports presently constitute to about 10% of Spritzer’s annual revenue.

“This is our ninth export market after China last year.

“We don’t want to give any sales outlook as of now yet and hope the product does well there,” he says.

According to consultancy firm Zenith International in a report, UK’s consumption of bottled water drinks rose 8.2% in 2015 to reach almost 3.3 billion litres, with sales value of more than £2.5bil.

Zenith says volumes have more than doubled over the past 15 years and consumption per person now stands at more than 51 litres a year, with plain water at 44 litres and water plus at 7.6 litres.

On its operations, Chuah says that the company’s performance would very much depend on how the economy performs.

“We will see how the economy performs and demand for our products before we decide on anything.

“But as of now, petroleum product prices are on the rise again and this would mean higher raw material costs for us,” he says.

The company reported its recent quarterly results ended Nov 30, 2016 that saw its topline growing 24% year-on-year (y-o-y) to RM81.1mil due to the increased sales volume for both bottled water products and packaging materials.

Its pretax profit for the quarter however dropped by 20% y-o-y to RM7.7mil due to higher input costs and selling and distribution costs incurred for market exploration, product advertising and promotion incurred in China.

“In China we had to contend with the costs of starting up the business there but we are hopeful that our efforts will pay off in the future,” he says.

Interpacific Research rates the stock as “neutral” with a new fair value of RM2.00 on a 14 times price to earnings ratio (PER) based on its financial year 2017 (FY17) earnings per share forecast of 13.42 sen, which is +1 standard deviation above the 10 times PER valuation mean over the past five years.

“With expenses related to its effort to increase sales in China, we forecast earnings will contract -15% but subsequently expand 12% in FY18, buoyed by higher sales. Overall, pretax profit margin is expected to shrink by 3% from 12.9% to 9.9% due to efforts involved in the China expansion,” Interpacific says in its report.

The research house says it favours Spritzer’s market leader position in the local mineral water market and the resilient nature of the industry. 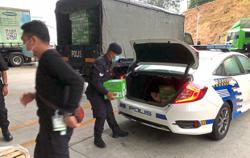