Big acquisition: Logo of PLDT is seen at their headquarters in the financial district of Makati city, metro Manila. The company and Globe Telecom Inc recently acquired the telecommunications business assets of San Miguel Corp for US1.5bil. – Reuters

The cement maker is part of the Cemex group globally and had raised some US$533.4mil in a listing that is the third largest in the history of the Philippines.

The lead underwriter for the IPO BDO Capital and Investment Corp said three quarter’s of the IPO was bought by foreign investors while the remainder was acquired by local investors in the Philippines.

Cemex Holdings sold its 2.03 billion shares at 10.75 pesos per share with an overallotment option of 304.95 million shares, filings with the stock exchange showed.

Post listing, the Cemex group through Cemex Asian South East Corp still has a firm hold on the company with a 55% stake post listing.

A bulk of the proceeds from the listing or US$300 will be spent to build a cement plant with an annual capacity of 1.5 million tonnes highlighting the anticipated demand growth that is expected to come given that all of its sales are derived domestically.

This acquisition had created the fourth largest property developer in the Philippines.

Starmall still expects growth in spite of the state of the brick and mortar industry and wants to expand aggressively with a plan to more than double its office and mall leasing floor space by 2018, according to analysts.

“We forecast EBITDA (earnings before interest taxes depreciation and amortization) to grow at a compounded annual growth rate of 14.15 percent and net income to grow an average of 10.4 percent annually,” according to analyst at COL Financial Richard Laneda in a report.

Its expansion plan will entail the company expanding mall space at its existing malls and also opening new ones.

With these plans, Starmalls is expected to be a significant growth driver for Vista Land moving forward.

Consolidation was also seen in the Philippines’ telecommunications industry that bolstered existing dominant player’s position but may enhance the industry’s competitiveness in the longer term given the finer terms of the deal.

The deal was the largest acquisition by value in the Philippines for 2016 and was announced in May.

PLDT and Globe are each taking an equal stake in the companies to be taken over: Vega Telecom, Inc, New Century Telecoms, Inc and eTelco, Inc.

The acqusition will also give both PLDT and Globe access to additional frequencies that will significantly help improve Internet speeds, quality and mobile network coverage in the Philippines.

The said frequency is the 700MHz and this will help provide better indoor coverage and enable faster rollout in regional and rural areas.

PLDT said in its press release that its customers will progressively experience faster Internet and higher call and data quality across its fixed and mobile networks.

“Capacity and coverage, both indoor and outdoor, will be expanded and enhanced. This will enable PLDT to provide attractive mobile connectivity and digital services to its consumer and enterprise customers at affordable prices,” PLDT said.

Reports said that this valuable spectrum have been held by San Miguel for sometime prior to this, and both PLDT and Globe had recently asked regulator to reassign some of this spectrum for their use.

The acquisition also involves a return of certain radio frequencies to the Philippines’ government, which will allow for a third competitor to enter the market.

Philippines’ President Rodrigo Duterte had earlier said that he may open the industry to foreign players to enhance the its competitiveness and had also sounded for an improvement the telecommunications service there.

Meanwhile, the debt capital market front saw the Asian Development Bank dominating the scene raising some US$15.02bil in total last year. Debt deals were completed mostly in the first half of the year.

The other two players in the top ten deals in the debt capital market were the Philippines government that raised US$2bil and San Miguel Corp which raised US$639.12mil. 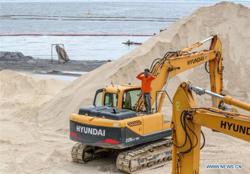