F1 – a matter of ringgit and sense

Raine: “I think the fact that we’re just focusing on the cost...It’s short-jumped. We should definitely look at the benefits as well’.

The decision to stop hosting the Formula One (F1) Malaysian Grand Prix beyond 2018 is driven by cost concerns, but fans are saying that the country stands to lose more by being out of the race.

“It’s like a business model that no longer works. When that happens, what do you do? Do you close shop, or do you revamp it so that it starts generating revenue again?” one observer asked.

When F1 started in Malaysia back in 1999, it was new and exciting, because it was just one of two Asian countries at the time (other than Japan) that held the event.

It was considered bold of Malaysia to do that. It was unique, and it worked – for a while.

“But when you have other players coming into the fray that come up with a fresher product, then, like a business, if you just continue doing what you’ve always been doing, you’re definitely going to lose out,” he said.

When Singapore started hosting the first ever F1 night race from 2008, it raised the bar for the standard of racing circuits around the world.

Some observers believe that F1’s popularity in Malaysia started suffering after Singapore made its F1 hosting debut in 2008.

Tickets sales are down and according to Tourism and Culture Minister Datuk Seri Nazri Aziz recently, Malaysia spends around RM300mil a year to host the race in Sepang.

Ironically, Singapore is also mulling the idea of pulling out of F1, also due to high costs.

One observer feels that Malaysia did not make the best of its position when it hosted the F1.

“The relevant parties should see it as an opportunity to promote the entire country – not just a circuit and selling a bunch of tickets,” said one industry observer.

“When former prime minister Tun Dr Mahathir Mohamad brought F1 to Malaysia, it helped put the country on the world map. In spite of the costs, he believed that it would be outweighed by the benefits in the long run.”

And put Malaysia on the world map, it did.

The inaugural F1 Petronas Malaysian Grand Prix was held in October 1999 and was witnessed by over 80,000 spectators together with an estimated 600 million television viewers worldwide.

For the longest time after that, Malaysia became synonymous with two things - the Petronas twin towers and F1 - a sentiment that is shared by Mercedes-Benz Malaysia Sdn Bhd sales and marketing, passenger cars vice president Mark Raine.

“It was two things that Malaysia was best known for. F1 had put Malaysia on the global market.

“I think the fact that we’re just focusing on the cost... It’s short-jumped. We should definitely look at the benefits as well,” he said.

On top of escalating costs, ticket sales for the yearly event and television viewership have also been dwindling, with Razlan saying that F1 was “no longer exciting”.

This criticism is despite Malaysia’s state oil company, Petroliam Nasional Bhd (Petronas), being both the major sponsor of the Mercedes team and the naming-rights sponsor of the local Grand Prix.

According to reports, Petronas’ involvement in the F1 has given the brand extensive global awareness and visibility. Between 2012 and 2015, Petronas’ media exposure grew by 400%, making it the No. 1 oil and gas (O&G) brand in the F1 through “live” broadcast coverage.

In 2015, the partnership earned Petronas approximately US$901.08mil (RM3.8bil) in global media exposure. On average, the media impact for O&G companies in the F1 is estimated at just US$200mil (RM840mil).

Razlan has been quoted as saying that a temporary withdrawal from F1 after 2018 could be beneficial for the country to take a break. 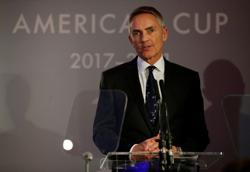