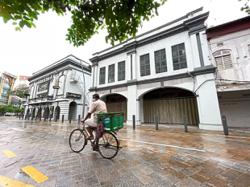 KUALA LUMPUR: If one is nostalgic enough to reminisce the good old colonial pre-Merdeka era and a place to satisfy one’s compelling desire for delicious palate, amid an exclusive dining experience, then its that dear old “The Best Steak in Town” Coliseum Cafe which has stood the ‘taste’ of time for 95 years.

A significant rendezvous for British miners, plantation owners and civil servants during its halcyon days, Coliseum remains a compelling attraction in Kuala Lumpur today, drawing scores of local and foreign visitors who come for its nostalgic ambience and classic offerings.

In fact, the pre-war building which houses the cafe, hotel and cinema is still boldly standing along Jalan Tuanku Abdul Rahman (TAR) or the former Batu Road, without a hunch of weariness.

Coliseum Cinema and the Coliseum Cafe and Hotel are one of the many legacies of tycoon Chua Cheng Bok who passed away in 1940.

More than nine decades later, the eatery may have lost some of its original lustre but a recent change in ownership has brought a new lease of life and spirit to it.

Now thrust into the hands of its new owners, the former Coliseum Cafe & Grill Room, which has been operating since 1921, remained authentic in preserving its layout, menu, as well as, retained some of its Hainanese cooks and yes, the chefs’ whites.

Managing director of the current Coliseum Cafe & Hotel (KL) Sdn Bhd, CH Low, said Coliseum was set to continue its legacy in serving the best ambience, food and beverages which brought back many fond memories of the yesteryears.

He said it was the passion and love for the iconic and a restaurant with a historical backdrop that had kept the place alive, drawing all races and tourists from all walks of life to share a meal together with their families, loved ones and friends.

“Coliseum, known as “The Best Steak in Town’, now at 95 years old, is a living testimony of the old colonial era, the nostalgic days of the old Malaya during the pre-war.

“It is unique, surviving over 90 years and able to maintain its original character and charm despite the 21st century modernity,” said the 69-year-old Low in a rare interview with Bernama.

As one of the co-owners of the restaurant, he saw great potential in authentic Hainanese food which was still loved by patrons apart from its  priceless ambience.

“There are many food chain brand (which) opened in recent years, offering dishes from the 50’s and 60’s era, but it cannot be compared with Coliseum that kept many authentic features and characters.

“We continue to preserve the existing structure like it was present before Merdeka times and restored what was necessary.

“This includes the original signages, wooden-cum glass panelling as well as the subdued lighting.

“So when patrons step inside, they will feel like they have gone back in time into the olden days, greeted warmly by our hosts and hostesses who will lead you to your table dressed with white table cloths, matching coloured napkins and old cutleries,” said Low.

He said most signature dishes remained intact with slight changes to the food and beverages that came with the trend as well as a certified halal status  kitchen.

“When we took over, we had about 500 dishes on the menu but we streamlined them to about 100 now, offering only the best like our ‘Sizzling Tenderloin Steak,’ ‘Hainanese Chicken Chop’ and ‘Baked Crabmeat’,” he said.

To maintain the quality of its Hainanese taste, he said the main kitchen in Jalan TAR also served as the central kitchen where sauces and other main ingredients were prepared.

“Apart from maintaining Hainanese cooks, we employ Malay and Indian chefs too, as we want to have a good mix of ‘One Malaysia’.

“We are not selfish in sharing our experience and knowledge including with young chefs and culinary students because we want them to learn about this place, get them to appreciate this iconic brand and bring their families and friends to dine here,” said Low.

Having said that, Low, however, sees himself as a custodian, to continue the Coliseum’s legacy and expand it so that people in this country would have the chance to taste and feel the warmth of Coliseum’s service.

For Low and the other owners, Coliseum belongs to all Malaysians and thus, felt that it was a great challenge to uphold the tradition and honour those who have come before them while ensuring the restaurant’s profitability.

Coliseum Cafe’s success can also be measured by their move to open up branches five years ago, beginning with an outlet at Plaza 33 in Section 13, Petaling Jaya, The Gardens in Mid Valley Mall and Sunway Pyramid Shopping Mall.

Moving forward, as Coliseum approaches its centennial in 2021, he expects the restaurant to expand further to Penang, Malacca and Johor with a total of 10 branches.

The iconic brand is also registered in Singapore, Indonesia and China but has yet to decide on opening its overseas branch due to the current economic challenges.

Meanwhile for patron BS Foh, 64, from Subang Jaya, he said by looking at the old fan, swing-wooden door, the floors and the environment, it simply brought him the comfort of remembering the good old days in the 70’s where he first dined at the restaurant.

“Those days there were many pubs nearby along this road...and I will usually stop here (Coliseum) for the tantalising steak...while entertain business associates here. These were among the memorable times I had here,” said Foh who originally hails from Ipoh, Perak.

While for Iguchi, a Japanese who has been residing in Kota Kinabalu, Sabah, for the past 14 years, recalls first stepping into the restaurant in 1992.

He could not never forget the taste of the sirloin steak.

“This place is also nearby the Merdeka Square, railway station which is historical to Malaysia.

“I hope people will continue to support this restaurant and have tourists come here to appreciate the authentic food and the value of this place,” quipped the 50-year old native of Yokohama, Japan.