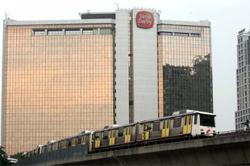 epa05153888 A picture made available 11 February 2016 shows the building of the company Zurich Versicherung, in Zurich Oerlikon, Switzerland, 10 February 2016. Zurich Insurance Group, Switzerland’s biggest insurer, reported a fourth-quarter loss after damage claims ranging from the Tianjin disaster in China to storms in the UK and Ireland. EPA/ENNIO LEANZA

The financial services group told Bursa Malaysia that they had on Wednesday signed a conditional share purchase agreement with the Swiss insurance company.

MAAG, which owns 75% equity interest in MAA Takaful, will receive RM393.75mil for its stake.

MAAG and Solidarity had last week received the approval of the Finance Minister, vide a Bank Negara Malaysia letter dated April 27, for the proposed disposal.

Subsequent to the completion of the proposed disposal, the MAAG board proposes to declare an interim special dividend of 35 sen per MAAG share on an entitlement date to be determined and announced later.

The total amount under the proposed special dividend will be payable out of the disposal consideration.

The proposed special dividend will amount to about RM100.8mil computed based on the current issued and paid-up share capital of MAAG.