ANDREWS, TX - JANUARY 20: The price of gas is advertised at a fuel station in the Permian Basin oil field on January 20, 2016 in the oil town of Andrews, Texas. Despite recent drops in the price of oil, many residents of Andrews, and similar towns across the Permian, are trying to take the long view and stay optimistic. The Dow Jones industrial average plunged 540 points on Wednesday after crude oil plummeted another 7% and crashed below $27 a barrel. Spencer Platt/Getty Images/AFP == FOR NEWSPAPERS, INTERNET, TELCOS & TELEVISION USE ONLY ==

In a filing with Bursa Malaysia, Dialog said the small field risk service contract to develop the Balai cluster fields was terminated due to the difficult business environment and persistently depressed oil price.

The oil and gas-based technical services provider said BC Petroleum Sdn Bhd -- which is 32% owned by its unit Dialog D&P Sdn Bhd, 48% by Roc Oil Malaysia (Holdings) Sdn Bhd and 20% by Petronas Carigali Sdn Bhd -- had ceased operation and had on Wednesday signed a termination by mutual agreement with Petronas.

The risk service contract, which was terminated effective Dec 1, 2015, had been signed by Dialog D&P, Roc Oil and Petronas Carigali with Petronas on Aug 16, 2011 and was subsequently novated to BC Petroleum.

With the termination of the contract, BC Petroleum will receive the balance of the capital expenditure reimbursement within the first half of 2016.

Dialog said its total losses amounting to about US$10mil (RM41mil) had been substantially provided for in the group’s financial results.

“As such, the termination is not expected to have any material effect on the earnings, net assets and gearing of Dialog for the current financial year ending June 30, 2016,” it said.

The termination of the contract does not require approvals from the relevant authorities and the shareholders of Dialog, and has no effect on the share capital and substantial shareholders’ shareholdings in Dialog. 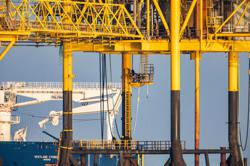