U Mobile – the wild card Wong: ‘We pride ourselves on offering innovative products and value-added services for our customers.’

AS a relatively young telco, U Mobile Sdn Bhd has developed a reputation as a wild card in the local mobile landscape which has long been dominated by three operators.

The orange-hued telco’s actions as the smallest of the four mobile carriers are creating ripples throughout the industry, both in terms of pricing and product offerings.

The full-fledged telco has partly triggered a price war in the industry and is showing no signs of stopping. At the rate it is going, U Mobile is bound to shake up the multi-billion-ringgit industry. “We’re still No. 4. We are still the smallest of the lot,” chief executive officer Wong Heang Tuck tells StarBizWeek.

U Mobile, he says, has been generating “positive growth” and currently boasts a subscriber base of four million, of which 70% are smartphone users.

“We pride ourselves on offering innovative products and value-added services for our customers. We are relevant to the market,” Wong says.

The bright spot for U Mobile has been the traction in its products and packages. Its offerings such as U MicroCredit, Wong says, have been well-received as it understands the market. “We understand that a particular segment aspires to own an iPhone and we cater to the segment by bundling it with micro credit,” he says.

Being a data-centric telco, Wong says U Mobile appeals to the younger generation, mainly those aged 35 and below.

Without providing its net adds and average revenue per user (arpu) in the last quarter, Wong says its subscriber base has been growing and U Mobile is now getting more quality subscribers.

“Our ARPU is lower compared to the other three telcos. Our blended arpu is still low but growing,” Wong adds.

Financially, U Mobile is still loss-making despite the growing number of subscribers and arpu.

“Our revenue is growing but we are still losing money. However, our losses are narrowing. Our revenue is seeing double-digit growth,” Wong discloses.

Wong, who is also the walking ambassador of U Mobile as he is clad in the brand’s bright colour, says the company is unlikely to turn EBITDA-positive this year and will likely take two years to do so.

By then, he says U Mobile will be ready to go for a listing, as it will be able to exhibit sustainable growth.

Wong says the listing plan is still in the pipeline, as the telco needs to tap into the capital markets to raise funds as the telco business requires “constant investment”. This is because there will bound to be new and upcoming technology, among others.

“We hope to list the company in two to three years’ time. We need to show sustainable earnings growth and a track record. We can go for a listing right now, but I don’t think we will derive an optimal value at this stage,” he explains.

While the industry is pointing fingers at U Mobile for the price war, given that it has a low price point, Wong says the other telcos should not be too concerned.

“We are still quite far away. They (telcos) should not be too concerned with us,” Wong says.

He, however, says that U Mobile does not intend to stay at No. 4 all the time.

Wong believes in offering the best value plans – giving the best bundles that meet the needs of its customers. Using a shopping trip as an analogy, he says, consumers will choose the best meat or vegetables that stores can offer.

“If you look at our latest advertisement, we say that we are the telco for the rakyat and that cannot be truer because U Mobile really does strive to provide the best value and customer experience to our customers.

“We are the first telco in Asia to provide micro financing for mobile phone purchase and the first telco in Malaysia to give free 50MB Internet roaming in selected Asia-Pacific countries to both prepaid and postpaid customers,” Wong claims.

Despite having a low price point, Wong dislikes U Mobile being labelled as cheap. He says it is the value proposition that the brand is offering.

He is also unperturbed by the competition from mobile virtual network operators and stresses that U Mobile is a full-fledged telco.

Admittedly, Wong says one of the challenges is to create customer awareness.

“When we started, customers had bad experiences and stayed away. But in the last few years, we have improved a lot. It takes time. There is a lot of ‘demonstration’ to convince customers. The perception has changed and a lot of people are porting in to U Mobile. It is very positive,” he says.

U Mobile will continue to be skirmish against the big three. All operating cellular and wireless players are currently on expansion mode.

“At the end of the day, we want to build our own network. We will be investing RM3bil to RM4bil in the next four to five years to grow our network, putting an additional 5,000 new 3G/4G Long-Term Evolution (LTE) network sites,” Wong reveals.

He notes that rolling out a network is not an overnight endeavour.

Nonetheless, Wong says its network coverage is “the same as the other three”. “We’re on par with them on the west coast. We are rolling out more coverage on the east coast,” he says, adding that more work needs to be done in Sabah and Sarawak.

U Mobile currently has a 10-year deal with Maxis Bhd

RAN-sharing is aimed at taking the costliest portions of an operator’s network - the cell sites and towers, base station equipment and the transmission network - and sharing these infrastructure with competitors, hence generating savings from reduced duplication of network assets.

“We have the best (network), although the other three (telcos) may not like it,” Wong notes.

U Mobile has been relatively quiet despite all the noise in the market on which telco boasts the best 4G coverage. The telco has chosen to remain on the sidelines.

As the country is just embracing 4G, U Mobile has announced its partnership with ZTE Corp, the leading global provider of telecommunications, equipment and network solutions, to drive the development of pre-5G and the future implementation of 5G mobile network technologies locally.

With the collaboration, U Mobile aims to be the first telco in the country to enter into 5G network development.

Wong says it is not too early to look at the development of 5G that is supposed to be rolled out in 2020, although the standards have not been fixed yet.

He notes that one of its challenges is to keep abreast of the changes in technology.

With 5G, the speed is beyond what the current 4G can offer and U Mobile is working to get itself ready for the rollout.

Moving forward, Wong says data will continue to be its growth driver and expects 2016 to bring more stability to the industry.

“It has been a challenging 2015 for the industry and there were some distractions like the implementation of the goods and services tax. We expect consumer spending to come back next year,” Wong says. 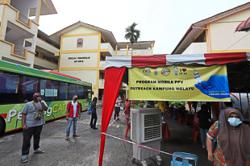