Since going public in June 2012, not only has it to live up to its billing as among the largest the plantation company in the world, FGV had to fulfill a big obligation beyond the expectations of its shareholders – largely due to it being perceived as an important political cog to the Government.

The reason being FGV is synonymous with settlers in the rural areas which are the strong hold of Umno and Barisan Nasional.

At the same time, FGV that has large tracts of plantations of over 20-years palm age profile, and it has an urgent need to transform into a more efficient and productive plantation company. 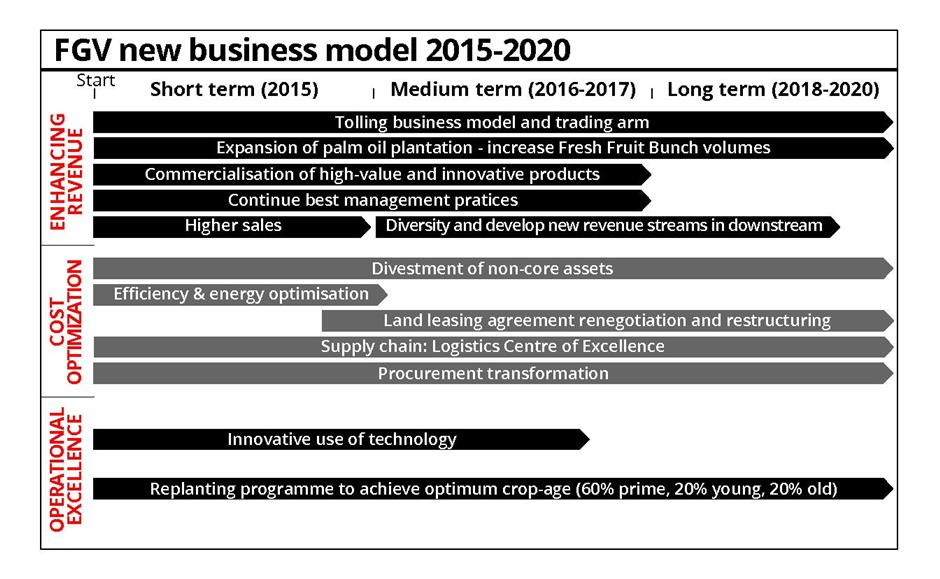 For years, there have not been many major programmes to address the efficiency issue of the FGV upstream plantations.

Earlier this week, FGV unveiled its updated transformation plan for the next five years.

By 2020, the plantation conglomerate hopes to, among others, expand its oil palm plantations (non land lease agreement related) to increase its fresh fruit bunches (FFB), execute management practices in the estates to improve yield and achieve an optimum crop age where 60% of the trees are prime, 20% young and 20% old trees.

However, until this transformation comes to fruition, the FGV’s financial results and share price performance will continue to come under heavy scrutiny.Case in point is FGV’s first quarter results this year where it posted a net core loss of RM44mil - the third consecutive quarterly losses for the group - which left analysts disappointed.

Some research houses have downgraded FGV, including CIMB Research, which cited concern that FGV could potentially lose its spot on the FTSE Bursa Malaysia Kuala Lumpur Composite Index (KLCI) list due to its low market capitalisation when the review is carried out next month.

FGV market capitalisation has been wiped out by 65% to RM7.19bil from RM20bil in the early days of its listing while its share price is currently trading at RM1.97 down by 58% - a far cry from its IPO price of RM4.55 per share.

FGV is more susceptible to the CPO price movement compared with other plantation companies, according to FGV group president and CEO Datuk Mohd Emir Mavani Abdullah.

Any RM100 per tonne change in the CPO price could result in either a “reduction or an additional” of RM100mil to FGV earnings, says Emir.

FGV’s earnings are most sensitive to the CPO prices compared with its peers because historically, the company have been fully-dependent on its plantation income.

Furthermore, the CPO prices have fluctuated in the range of RM703 to RM2,800 per tonne in the last 20 years.

The unfavourable environmental conditions including dry spells and the worst floods in decades at the end of last year and early this year had compounded the negative impact on the yields.

But FFB yields have been improving since March. Despite many local plantation companies seeing their yields on average easing by 21% in January, Tifli maintains that FGV plantations were down by only 15% in the first quarter of this year.

Apart from the CPO price, an efficient oil palm planter is often benchmarked by its FFB yield, cost of production and the oil extraction rate.

In the case of FGV, its cost of production in the first quarter 2015 had gone up significantly to RM1,534 per tonne – which is well above the plantation industry’s average of RM1,450 to RM1,500 per tonne.

The combination of the weak benchmark indicators together with the lower CPO sale price in Q1 2015 at RM2,279 per tonne from RM2,584 previously, has affected its latest quarterly result.

Following the wider losses in the downstream segment including the lower crush margin in its Canada business unit in Q1, FGV will actively review its non-core, dormant and poor-performing companies.

“We are in the process of divesting a number of non-core assets - we expect to be able to say more about these divestment in the second quarter and third quarter this year,” adds Tifli.

FGV is tied to the strict terms of its land lease agreement (LLA) with Felda, which some market analysts say has distorted in the calculations of its profit.

The LLA signed in 2012 has two components whereby Felda is compensated. FGV has to pay Felda a fixed amount of RM248mil per year in cash for 20 years and the second component is a 15% share of operating profit from the sales of FFB derived from the estate land leased from Felda.

FGV is the only plantation company in Malaysia that adopts the unique LLA business model that has paved the way for its listing exercise.

Felda, by virtue of the Land Settlement Act 1960, was given more than 800,000ha by the state governments in the 1950s. Of the total, some 479,765ha went to the smallholders and the remaining 355,000ha of oil palm estates, were managd by Felda Holdings Bhd on behalf of Felda.

During the listing exercise, Felda Holdings was parked under FGV. In return, Felda gets paid through an LLA and 15% share of the sales of FFB.

Under the accounting standards, FGV will have to treat the LLA as “costs”. This means FGV has to attach a value the LLA fixed lease amount payment and the share of profit to Felda based on the present value of FGV’s future cashflow. “So the fair value calculation means that instead of the costs and cash that we have to acquire, we have to do the assumptions for future CPO price, costs and volume.

“Being a plantation company, we have to take into account the replanting and tree age profile aspect as well,” explains Tifli.

In terms of the fixed amount to be paid to Felda, it is very clear cut. “However, it gets complicated when we need to assess the future 15% share of the operating profit to be paid based on the future value of the CPO price, costs of production and CPO volume.

Under the plan, the group aims to grow its FFB production that are not tied to the LLA.

The group’s tree age profile of 20 years and above represents about 41% of the total planted area compared with 57% when FGV was listed.

The plantation group also intends to invest in brownfields to fast track the improvement in its crop age profile.

“As we grow our FFB volumes, we are focused on expanding the non-LLA portion, which stands at 15% currently. We expect that by 2016, we will be able to achieve non-LLA FFB volumes of one million tonnes,” adds Tifli.

This will not only help FGV to significantly reduce its production costs and offer better margins, but will also enable the plantation giant to remain the largest CPO producer in the world.

FGV Trading would manage the marketing of CPO and its other refined products in order to generate the best margins.

“The following quarters should paint a clearer picture on the performance of this new trading company.

“Normally we trade three to 3.5 million tonnes of CPO on annual basis, but FGV Trading is set to boost trading by an additional one million tonne.”

According to Tifli, there is still RM100mil left from its total IPO proceeds of RM4.5bil.

“We need to use it by June 28. This can be utilise to finance FGV existing operations in Indonesia and Malaysia.”

As of March 31, FGV has a cash hoard of RM2.9bil in its balance sheet.

“At a gearing ratio of 0.7 times, we still have the capacity to borrow (if need be). Going for sukuk will offer a lower financing costs for us compared with commercial loans,” adds Tifli.

On top of increasing efficiency and lower the production costs, he says mergers and acquisitions will remain part of the group’s expansion plan going forward

It will be a long track for FGV as execution is key in the next five years to determine the company’s future growth.