According to Cahya Mata Sarawak Bhd

MPAS had earlier signed a PPA term sheet with SEB-owned Syarikat Sesco Bhd for the supply of 150MW to its proposed integrated phosphate complex.

Curtis added that the project would be financed via a mixture of shareholders’ equity and long-term, bank-funded debt.

The other two shareholders of the joint-venture firm are Malaysian Phosphate Ventures Sdn Bhd and Arif Enigma Sdn Bhd, which have a 40% and 20% equity interest, respectively.

The proposed complex will comprise nine integrated plants on 142ha with an annual production capacity of some 1.4 million tonnes of phosphate and related products per annum by 2020.

The complex will be located near to the Samalaju deep-sea port, which is currently under construction.

“The remaining plants are expected to be fully commissioned by the fourth quarter of 2018,” said Curtis in CMS’s 2014 annual report released last week.

He said the phosphate complex project would propel Malaysia as a leader in the production of halal-certified animal feed for poultry, fisheries, cattle and ruminant livestock, as it eliminates the use of meat and bone meal in all animal feed.

“Phosphorous is an essential base nutrient for animal and plant growth with no substitute, and is widely used in food, feed and fertiliser products,” he added.

As the first large-scale producer of soluble phosphates in Malaysia, Curtis said the project would contribute significantly towards the Government’s efforts to increase food securities and the competitiveness of the palm oil industry.

The phosphate complex project is the CMS group’s second major investment in Samalaju Industrial Park, which also caters for energy-intensive industries like aluminium and ferroalloy and manganese alloy smelters in the Sarawak Corridor of Renewable Energy.

Curtis said full commercial production of ferrosilicon alloys under Phase 1 is expected by the second half of this year.

By then, the plant is expected to produce 308,000 tonnes per annum.

Phase 2 project will involve the construction of a manganese alloy smelter, which is expected to commence production by the first half of next year.

On full production, the plant will have an annual capacity of 600,000 tonnes of ferrosilicon and manganese alloys. 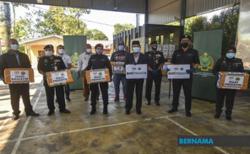 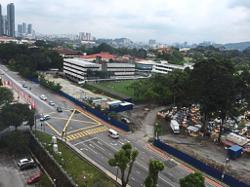