Going cashless as a way of life 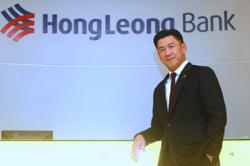 Ong (left) and Tan, who says the main objectives of the framework are to address indiscriminate increases in interchange fees by ensuring that the cost of payment card acceptance is fair and reasonable.

REFORMS are taking place in the card payment industry that will indefinitely transform the way Malaysians make payments. Essentially, this is the start of Malaysia going cashless and it begins on Thursday.

The reforms will affect banks, merchants, terminal and card manufacturers and payment service providers. It will involve revenues of RM5.1bil from now until 2020. Out of this, RM1.1bil will be invested for infrastucture development.

Expect many more card terminals to flood the market as Bank Negara implements measures to encourage Malaysians to use debit cards. One will be able to wave a debit card at a contactless terminal to pay for a RM5 meal at a mamak stall.

While consumers may still be oblivious to the changes, merchants are already experiencing the significantly lower interchange fees incurred for debit cards.

Interchange fees for credit cards will now be capped to ensure merchants do not pass on the cost to consumers.

Acquirers are banks who provide payment terminals to the merchants.

In the last 18 months, some indiscriminate increases in interchange fees have caused acquirers to raise the MDR.

The merchants, who are affected by the higher MDR, are pressured to pass on the cost by increasing the price of goods and services.

This adversely impacts the public, even those who do not use payment cards.

Bank Negara director of payment system policy department Tan Nyat Chuan said that interchange fee accounts for about 16% of the industry’s total credit card revenue, while the bulk of the revenue comes from interest and finance charges derived from the customers’ credit card revolving balance.

The move to promote debit cards isn’t surprising, considering some 90% of transactions are still being conducted in cash in Malaysia. Most developed countries including the Australia, New Zealand the the UK conduct the bulk of transactions via cards.

The cost of handling physcial cash is inefficient and expensive - roughly RM1.8bil a year.

Tan explained that the main objectives of the framework are to address indiscriminate increases in interchange fees by ensuring that the cost of payment card acceptance is fair and reasonable.

He said that the implementation of ceilings to the interchange fees would protect the interests of the consumers. 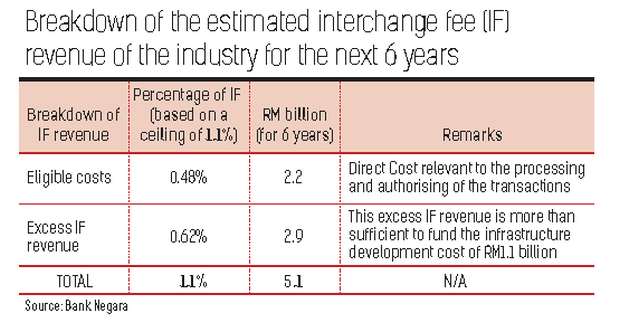 “The more affordable cost of payment card acceptance brought about by the framework would also provide incentives for smaller merchants to accept payment cards. This would facilitate small businesses to increase their sales from accepting payment card transactions from both consumers and tourists,” he said.

On Dec 23, Bank Negara released the Payment Card Reform framework on its website. Among the many measures, some salient points stood out.

> Contactless terminals will make up some 30% of all terminals.

> Debit card transactions to increase 10-fold by 2020. Consumers can expect great debit card offers as merchants encourage its use.

> Debit card interchange fee will immediately drop to 0.15% for domestic transaction and 0.21% for international transactions versus the average 1%.

> All card transactions will move from signature base to PIN based by 2017.

Debit Cards to be re-carded

The case for debit cards is obvious. Malaysia has 45 million debit cards in circulation, yet a neglibible number of people use the card for payments. It is used predominantly for ATM withdrawals.

The cheaper interchange fees for debit cards are one of Bank Negara’s measures to increase the debit cards 10-fold by its 2020 deadline.

“This will spur more merchants to accept debit cards and consequently, increase usage. In addition, there will also be coordinated industry efforts to promote the usage of debit cards as a ‘utility card for everyday purchases’ which is a safer, cheaper and more efficient alternative to cash,” Tan said.

On the migration of all card transactions from signature to chip and PIN based, Perry Ong, chief executive officer of AmCard Services Bhd and chairman of the National Card Group said that this measure was already ongoing among the 26 card players in the country.

The ongoing migration exercise of the domestic debit card to the EMV (Europay-Mastercard-Visa) chip and the Malaysian Chip Card Specification (MCCS) is now ongoing and will be rolled out from July 1,” said Ong.

This measure will require banks to re-card all cards, and investments will have to be made by the issuers.

Issuers will need to re-card under MCCS, and new terminals will also be required for in order to accept MCCS cards.

More terminals in the market

It is targeting an increase of 24 million debit card transactions to 89 million by year-end.

To achieve this, all banks will be given a yearly Key Performance Index (KPI), where they will need to deploy a certain number of terminals into the market each year.

As most large merchants have installed terminals in their outlets, achieving 800,000 terminals means drilling down to the smaller businesses, also known as the Tier 3 and Tier 4 merchants.

“Not all banks will have the manpower to deploy the terminals to the smaller players. There’s the issue of manpower and cost. Expect to see more Third Party Acquirers (TPA) coming in to assist the banks hit their targets,” said one observer.

It is a known fact that most of the foreign banks aren’t in the business of acquiring merchants, but only issue cards.

This observer says it is likely that the foreign banks will be the ones that will require the TPA services.

Some 30% of all terminals will need to be contactless, because this service offers speed and convenience where cardholders can pay for low value transactions (usually less than RM150) by just tapping their cards at the contactless card terminals.

On the RM1.1bil for insfrastructure development, RM400mil will go the purchase of new terminals, while RM700mil will go towards the upgrading cards, to be chip and PIN, as well as contactless enabled.

Tan said that the RM1.1bil investment is likely to be funded from the industry’s excess interchange fee revenue, which is currently used mainly to fund cardholder’s rewards and loyalty programme.

Tan said that Bank Negara had conducted a cost study on the banks’ excess interchange fee revenue. After accounting for the transaction related costs, this excess revenue is used mainly to fund cardholder rewards and loyalty programmes.

“Thus, the revision of the interchange fee rates after the framework, will not impact the banks’ profitability.

“Consumers are also better off as any reduction in the cardholder rewards and loyalty programmes would make payment card acceptance more affordable and lessen the pressure on merchants to pass on the cost by raising the price of goods and services,” he said.

Cardholder rewards and loyalty programmes are funded through the interchange fees, which constitute the main component of the MDR paid by the merchants.

Merchants are likely to recover such cost through higher prices of goods and services.

Consequently, consumers who do not use payment cards may end up subsidising the cardholder rewards and loyalty programmes enjoyed mostly by premium cardholders. 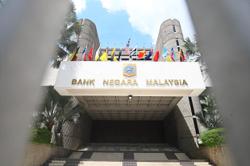