Enjoy life, but live within your means, invest wisely

What an experiment with marshmallows has to do with enjoying life and investing wisely. (Filepic shows the top of the 'Marshmallow Tree' created at the One World Hotel on Dec 12 last year. )

WHO doesn’t want to be happy now. Like right this instant.

We are surrounded by bumper stickers that remind us life is short; carpe diem! But when it comes to our finances, should we take the same approach?

I would say yes, but with a huge “but” attached to it. Go ahead and enjoy your life but only to the extent that you’re living within your means and not jeopardizing your financial future. If you are seeking gratification today, which results in stretching yourself beyond your means, then that’s a recipe for disaster.

Many people rely on debt to fulfill the need for instant gratification. But remember, debt takes the waiting out of wanting, yet never the pain out of repaying. Eventually you will pay in cash or, if you run out of it, then with your reputation.

In what has been famously known as the “marshmallow experiment”, hundreds of pre-school children participated in a psychology experiment conducted by Walter Mischel, a professor from the University of Columbia.

In the experiment, researchers told the children that they could choose either to have a marshmallow immediately, or, if they waited, they could have two instead when the researcher returned.

Then the childrenwho had waited could eat both. So it was a simple choice: have one treat now or two later.

Most of the kids gave in and ate the treat after being left alone.

Only a quarter exercised enough restraint to gain the reward of a second marshmallow as well. But it wasn’t this finding that made the marshmallow experiment famous. The interesting part unfolded decades later.

The researchers conducted follow up studies on these children and tracked their progress. They found that those who exercised control and delayed gratification were more likely to do well academically and socially than those who did not.

Those who waited ended up having better grades, lower levels of substance abuse, a lower likelihood of obesity, better responses to stress and superior social skills.

The series of experiments proved that the ability to delay gratification was directlylinked to success in life.

And the principle seems to play out everywhere. If you delay the gratification that comes from computer games and get your homework done (which is not too gratifying), you’re more likely to have better grades.

If you delay the gratification of binging on junk food and eat healthy, you’re more likely to live a healthier and longer life (and perhaps look better even). If you delay the gratification of spending your hard earned money on impulse and start saving, you’re more likely to achieve your financial goals. See where this is going?

Meeting your financial goals requires the skill of delayed gratification. You are trading off the enjoyment you gain from spending your money today so that you or your family can be comfortable in the future. So now that we know that, what determines your ability to delay gratification?

Researchers at the University of Rochester decided to replicate the marshmallow study but with a twist. They split the children into two groups.

In the first, the children were promised rewards for delaying their gratification but didn’t get a reliable experience; for example, they were promised a bigger box of crayons if they waited, but they never received it.

The second group was given a reliable experience.

The children in the first group obviously had very little reason to trust the researchers.

The second group was, on the other hand, already building its ability to delay gratification from all the positive experiences.

The result? The second group waited an average of four times longer than the first group. But the point here is that you can actually nurture the ability to delay gratification.

And, similarly, you could kill it. Experiences and the environment do play a decisive part.

If you have a problem delaying gratification and are looking to start making amends, you don’t want disappointing experiences like in the case of the first group.

You want to be able to hone your ability to delay gratification. And you can do that by making small improvements to start with.

Start with a new habit that is easy.

But how about just not using your credit card for a week?

And then notching it up incrementally and going without it for two weeks. Or if you could set aside RM50 a month, notch it up to RM100 in three months’ time.

This way, you are really honing your ability to delay gratification slowly but surely, just like how we build fitness at the gym.

People who succeed in life aren’t born that way but have grown up with good habits instilled in them.

The sooner you build this foundation, the more likely you are to succeed with your goals. 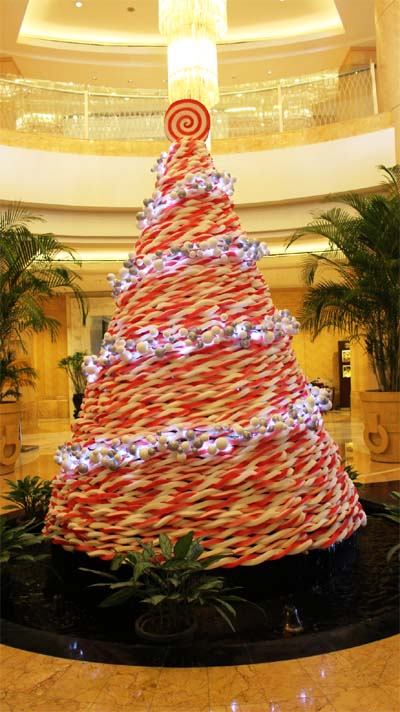 What an experiment with marshmallows has to do with enjoying life and investing wisely. (Filepic shows the top of the 'Marshmallow Tree' created at the One World Hotel on Dec 12 last year.