Kian Chong, grandson of Boon Siew, took over as chairman and executive director of Oriental Holdings on Jan 1.

Will the third generation of the Loh family inject excitement into the diversified conglomerate?

AS the new year begins, so does a new era for Oriental Holdings Bhd

That is seemingly the case for the Penang-based diversified conglomerate, as the third-generation descendants of its founder – the late Tan Sri Loh Boon Siew aka Mr Honda – step up to the helm of the family business, whose interests cut across the automotive, palm oil, real estate, hospitality, plastics manufacturing, building materials and healthcare sectors. (The group is a distributor of Honda vehicles in Malaysia and Singapore.)

Datuk Loh Kian Chong, the 38-year-old grandson of Boon Siew, has taken over the role of chairman and executive director of Oriental Holdings since Jan 1. This followed the retirement of his aunt, Datuk Seri Loh Cheng Yean (the second daughter of Boon Siew), from the role at the end of last month.

Kian Chong was formerly deputy to Cheng Yean, who became the group chairman in 1995 after the late Boon Siew.

Other third-generation members of Boon Siew’s family who have been redesignated to more significant positions in the boardroom are Tan Kheng Hwee, 48, and Datuk Seri Tan Hui Jing, 33. Both are now executive directors of the group vis-à-vis their non-executive roles previously.

Kian Chong is the son of Loh Kar Bee (Boon Siew’s eldest and only surviving son), while Kheng Hwee is the daughter of Cheng Yean, and Hui Jing is the son of the group’s former director Datuk Dr Tan Chong Siang and the late Datin Loh Gim Ean (the youngest daughter of Boon Siew).

To market observers, the recent boardroom changes in Oriental Holdings are certainly not a surprise at all as many have been expecting the succession of the business by the next generation to take place. After 19 years at the helm, Cheng Yean, Kian Chong’s aunt, retired from the chairmanship of the group on Dec 31.

“Many family-owned businesses in Malaysia have a proper succession plan, whereby the next generation is groomed to eventually take over the helm – Oriental Holdings is no different,” a fund manager tells StarBizWeek.

“What’s important is to ensure a smooth transition and that the successor has hands-on experience,” he adds.

It is notable that Oriental Holdings has spent a number of years grooming the third generation of the founding family to lead the group.

“They are very familiar with the family business, having worked from the ground up, and are well-qualified to drive the group,” the fund manager says.

Kian Chong, for one, began his career with Boon Siew group of companies in 2000. He was appointed to the board of Oriental Holdings in 2009.

Kian Chong’s deemed interest in Oriental Holdings stood at 57.06% as at Dec 4, according to Bursa Malaysia filings. This is held through the family’s privately owned companies, including Boon Siew Sdn Bhd (BSSB), which the Loh patriarch founded in the 1950s.

BSSB is the holding company of Oriental Holdings. It currently owns a direct stake of 43% and an indirect interest of 12.34% in the latter. 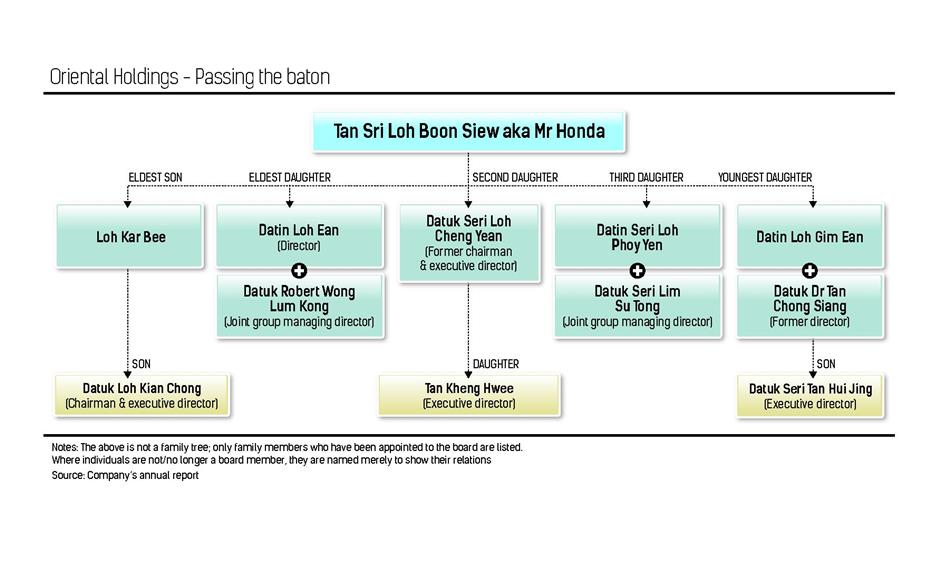 While the recent boardroom changes is an important development for Oriental Holdings, it may not necessarily mean a prelude to new way of doing things for the company.

CIMB Research analyst Saw Xiao Jun, who is among the handful of analysts who cover Oriental Holdings, tells StarBizWeek that he believes the group would maintain its business approach under the new leadership.

“I don’t think there will be any significant change in the company’s strategy over the near term,” Saw says.

“It is just changes in the boardroom, which the market has been anticipating,” he adds.

According to Saw, although Oriental Holdings is a fundamentally strong company, its shares have consistently traded below its book value due in part to modest investor interest.

“Oriental Holdings is an undervalued company as it is trading below its book value,” Saw points out.

“One of the contentions is that the company is holding too much cash, but investors require returns to their investment, hence, they expect to see better utilisation of cash (which is not happening at Oriental Holdings),” he explains.

At a close of RM7.09 on Dec 31, Oriental Holdings shares were traded at only 0.9 times the company’s book value.

Oriental Holdings has been sitting on a huge cash pile to the tune of more than RM2bil in the last few years. As at Sept 30, 2014, its cash hoard stood at RM2.4bil.

Past management had indicated the group’s preference to consistently hold large amount of cash on the balance sheet to secure debt at favourable rates.

While the company pays dividends to its shareholders annually, the gross payout rates have been on a declining trend from 10% in 2009 to 7% in 2013.

A broker notes that only if there were a significant change in the company’s strategy or some corporate exercises taking place, would there be more investor excitement towards Oriental Holdings’ stock. 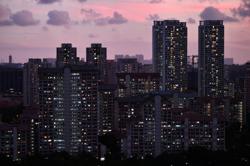 Singapore to up electricity tariffs for households by 9%, gas prices by 5%

Investment plan unveiled to build up Italy's Port of Taranto