Daim: 'We are entitled to some answers'

“The fear by most people is that this is too secretive. The board should come out and explain. Why money should be put in Cayman Islands?” he asked. Daim, 76, was speaking at a luncheon talk yesterday on “Politics and the Business Community – A Holy Alliance or a Devil’s Pact?” organised by Malaysian Industrial Development Finance Bhd.

“I don’t think it (1MDB) has been unfairly criticised. The rakyat have the right to ask. It is only fair given that a huge sum is involved,’’ he said.

1MDB had total assets worth RM51.4bil as of the end of March this year and total liabilities stood at RM49bil. The fund made a loss of RM665.4mil for the year ended March 31, largely due to the burden of servicing the huge debts.

The fund has continuously come under fire from various quarters over a wide range of issues from allegedly buying assets at inflated prices to paying high fees in its issuance of debt papers.

“We are entitled to some answers,” Daim said.

The former minister spoke for more than an hour, fielding questions from the audience on wide-ranging issues, despite by his own admission of being “unwell” yesterday.

During the event, he shared his thoughts on the current consolidation in the banking sector involving CIMB Group Holdings Bhd

Daim bought his first bank, the Malaysian-French Bank, in 1981.

“It also depends on a good business plan and capital base, alongside management,” Daim said when asked for his opinion.

“It is good to have big banks. But, if not properly managed, it doesn’t mean anything,’’ said Daim, who is linked to several banks in Europe and Africa.

In his speech earlier, Daim said looking at history and the reality in the world, whether in developed or developing countries, the nexus between politics and business existed everywhere and the question was the degree or form, whether institutionalised or couched in nice-sounding names such as lobby/lobbyist, foundations or simply cronies or worse, nepotism.

He said the nexus between business and politics was real, inevitable, and inherent and would not go away in the near future.

“In some instances, we also noted that this nexus has been used to attain foreign policy or trade objectives, albeit still to the advantage of the favoured big businesses.

“However, the fact is both sides need each other for their survival and continued existence. The question here is that the people must demand for such alliances and relations to be conducted in an open and transparent manner whether by the BN (Barisan Nasional) government or the Pakatan (Rakyat)-controlled states.”

Daim also talked about the need to separate the planner and the treasury.

He explained that in the past, the Finance Minister’s role was separated from the Economic Planning Unit (EPU). The Prime Minister, who normally takes charge of the EPU, has one of the most important portfolios in the Government because it plans for the economy.

“But if the same person were to do it, then it will be quite complicated. I think this is where a lot of conflicts are going on,” he said. 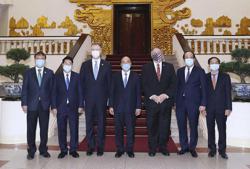