KUALA LUMPUR: Several online start-ups are proving the feasibility of their business models, which have been gaining traction within their first year in business.

Here, entrepreneurs in their first three years of business receive business coaching and undergo workshops as they vie for prize monies of up to RM600,000 to scale up their businesses.

Eternal Meteor’s business online marketplace is Goget.my, where errands of busy people are posted up and taken on by willing doers in the community.

Should this be a traditional business, the lean start-up would have needed to hire runners, pay for their transportation vehicles and fuel, warehousing for the goods and more, Chia said.

The “poster” for an errand may be an officer, for instance, who needs a parcel picked up in the next building and delivered to someone. He would post the errand on the website, where a willing person in the community – the “go-getter” – would agree to run for an agreed fee.

“With our set up, the cost in each job is covered within the go-getters’ transportation, so our marketing cost will only decrease per user as we grow,” said Chia, who started conceptualising the idea for the website late last year, when working as a consultant at a global management consulting group.

Her fellow co-founders are 24-year-old Muaz Jema Khan, a business development head in a management services company – who works Goget.my part-time – and two other silent investors who seeded the company at inception.

“I’m often surprised that professionals are willing to run errands for other people for a fee (that averages between RM15 and RM20) but they don’t see why not.”

From two to three jobs per day in June, Goget.my now has some 10-15 jobs daily, and 15-20 jobs on a busy day coming through its system.

An added benefit of an online business is the affordability and convenience of online marketing.

“It has been easy for us to pre-sell our idea to clients and carry out our sales and marketing inexpensively by way of investment-based online marketing. That is, for instance, making use of tools like google adwords to track your leads,” said StoreHub co-founder and chieftain Wai Hong Fong, who ran an e-commerce business in Australia for five years before moving to Shanghai, China, to study Mandarin.

There, Fong was consulted for advice on a point of sale system a friend had just implemented.

According to Fong, it was a poorly constructed system, which had him offer to build a better one while talking to the developers.

Typically, a business owner would download StoreHub on his ipad for testing.

Upon contacting StoreHub to purchase a package, the business will receive a receipt printer, cash drawer and an ipad stand.

His Shanghai-based co-founder, CongYu Li, 29 and was mostly responsible for developing the programme – with input from Fong.

“I am more focused on the technical perspectives of the business, so I know what customers want,” said Li, who left her role as a software developer at Microsoft to foray into the start-up.

Fong pointed out that there were more than 50 vendors of cloud based retail software in the United States alone, and about a handful locally, who are mostly in food and beverage, and retail industries.

“Our target market is Gen Y and Gen X entrepreneurs who are setting up food trucks, cafes or even starting their own retail stores with their own line of fashion,” Fong said.

Beyond the point of sale, StoreHub is meant to help a business manage their inventory, sales, people and customers well. 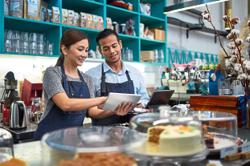