Are land prices too high?

EVERYONE is aware that there is a link between land values and property prices.

Prices of service apartments in KL City Centre (KLCC) are priced higher than those in Mont’Kiara or Petaling Jaya because land values in KLCC are higher. This is the conventional thinking and is often echoed by various stakeholders in the property development industry to explain why certain properties have to be priced at such high prices and built at such high plot ratios and/or density as the land was purchased at a very high price. 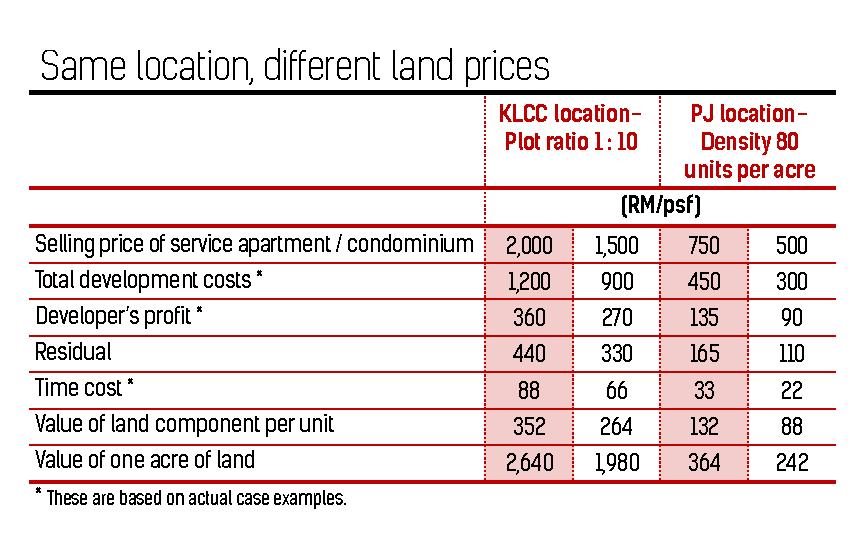 Let us consider two types of land in KLCC and Petaling Jaya. The ones in KLCC are two “limited commercial” sites of one acre each with a plot ratio of 1:10 while the ones in Petaling Jaya are two residential sites of one acre each with a density of 80 units per acre. Using the Residual Method of Valuation, the respective land values of the four sites will be analysed as per table shown.

It can be seen from the above examples that the land value is directly dependant on the selling price (or more accurately the sales revenue) from the completed property.

Thus, if two developers offer to purchase a piece of land at different prices, it is because they are each estimating the sales revenue differently. The sales revenue is dependent on the proposed selling prices of the completed units, the plot ratio or density they can secure from the authorities and their holding power in securing 100% sales at the proposed selling prices.

This is why there have been recent land purchases in the KLCC location at around RM3,300 per sq ft. These developers have forecast that they can sell their proposed units at prices much higher than RM2,000 per sq ft and that they can build at a plot ratio higher than 1:10.

Similarly, residential development land has quite recently been purchased in north-western Selangor beyond Sungai Buloh, south-eastern Selangor beyond Kajang and south of mainland Penang at prices which are very much higher than the transacted prices not too long ago. These developers too have forecast that they can sell their proposed units at prices higher than currently for these locations.

Now to answer the question whether land prices are too high.

The land price is fair at any one period of time only if the assumption of the developer on the forecast sales revenue is in line with “current effective demand”. It is high if the forecast sales revenue is ahead of the market and depends on a “future demand” dependent on various other factors peculiar to only one special developer or on factors such as DIBS (which is actually the future price of the property) and other special packages which appeal more to speculators, short-term investors and overseas buyers.

You cannot forecast that a terrace house in Bangsar will one day be RM3mil and therefore you could price it for sale today at RM2.5mil when current effective demand is only at RM1.8mil. This is when the price paid for the land is too high.

One may then ask: What about land scarcity and site assembly for future development purposes? In order to beat competing “purchasers”, the land value has to be higher? It can be higher but it should still be based on the same land economics principle of current effective demand determining the current land price.

Having understood this land economics principle, another question is: How can this principle be used for the advantage of urban dwellers and good town planning?

Is it possible, for example, that at every new proposed LRT, MRT and High Speed Railway/KTM station, the government also acquires an additional parcel of land adjacent or nearby to build new affordable residential units (the actual number to be based on market studies) which are to be sold at fixed prices of

Conditions can be attached that only tax payers or persons registered with the income tax department will be eligible for buying these units. There can also be a moratorium that the units cannot be sold for the next five years.

These affordable units at or near the stations can be built on a joint-venture (JV) basis with different developers – to give all an opportunity – at a fixed land price as the selling prices and plot ratio/density are fixed.

Details will have to be worked out, and maybe a new Act may have to be enacted. But there can be many advantages.

a) The land values of these sites will be fixed and sold or built on a JV basis based on the fixed selling prices and plot ratio/density.

b) This increases supply everywhere and thus house prices generally (including existing houses) will not rise in the exorbitant manner we have seen over the last several years.

c) Buyers get to live within an urban area with access to public transport, and are not pushed to the far reaches of the urban conurbation where they do not really want to live and where other costs of living are relatively more expensive. Transport costs and tolls readily come to mind.

d) All registered developers will be given a chance to participate and they can use this to build a brand around their names as the design, facade, specifications and facilities should be left to each developer.

In summary, land development involves high capital input which is mostly borrowed and the developer must thus tread prudently from the purchase of the land until 100% sales is completed. For the government, development of affordable homes in urban areas is a surefire way to win the hearts of the people. It should not be left to the private developer whose concerns are so very different.

P.B. Nehru is the managing director of City Valuers and Consultants Sdn Bhd 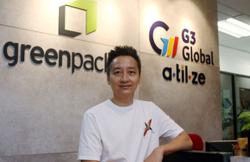