Govt does not expect immediate sharp increase in revenue

THE Government does not expect an immediate sharp increase in its revenue as a result of implementing the Goods and Services Tax (GST).

This is because the Malaysian GST model has been designed to be revenue neutral, essentially replacing the existing Sales and Service Tax (SST), says Ministry of Finance tax division deputy under secretary MA. Sivanesan (pic).

“The contribution would not be that significant in the first two years,” he says, adding that one of the reasons for this is because the 6% imposed GST rate will not apply across the board.

According to the Malaysian GST model, several goods and services will either be zero-rated or exempted.

Zero-rated supplies include items like foodstuff, agriculture products, livestocks, poultry and eggs, seafood, as well as exported goods and services. 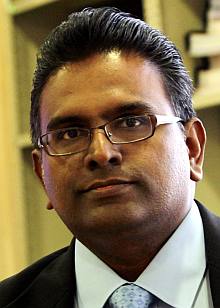 According to Sivanesan, replacing the SST with the GST of 6% will result in achieving “neutral” revenue.

The GST allows the Government to earn revenue from a broader base, as opposed to the current system. At the same time, the Government will reduce the corporate tax rate and individual income tax rates.

“So the net impact will be moderate.

“Any additional revenue the Government gets from the tax once implemented, will be a result of efficiency,” he says.

With an efficient GST system in place, it is estimated that additional revenue worth RM3.87bil and RM9.09bil in 2015 and 2016 respectively could be collected.

The contribution can potentially be much more if the GST brings out the shadow economy.

The introduction of the GST represents the Government’s intended shift of reliance on direct taxes to indirect taxes, moving towards a more stable source of revenue.

Meanwhile, oil revenue made up for 30.6% of total revenue.

It is notable that exported goods and services will be zero-rated under the GST structure, which should result in exports becoming cheaper. This could lead to local exporters becoming more competitive in the global market.

While there is an expected rush to purchase high value items prior to the implementation of the GST, he adds that prices will normalise within three to six months post implementation.

Sivanesan says that prices would most likely rise because of the demand factor as people may rush to stock up on items in anticipation of a price hike in tandem with the GST.

“Immediately after implementation, there could be a slight drop in demand,” he says.

Based on impact studies, the Consumer Price Index could increase by 1.8%. Being one of the later countries to implement GST, puts Malaysia at an advantage as it has at least 160 countries that it can look to for reference.

Sivanesan says Malaysia’s GST model closely replicates the UK GST, or value-added tax (VAT) system as it is referred to there.

Simon James from the University of Exeter Business School, UK, noted in his presentation that the UK VAT system was not without flaws. As evident in the 2005 English case of Marks and Spencer plc vs Customs and Excise, it took about 15 years for authorities to distinguish between the VAT treatment for both a biscuit and a cake.

As reported in The Telegraph, under complex VAT rules, cakes were zero-rated while chocolate-covered biscuits were not.

“The theory is that most ‘food’, including cakes and plain biscuits, should be free from tax, while ‘snacks’, including chocolate-covered biscuits, are considered a luxury and incur VAT.

“The rules have led to complex, and often absurd, cases with food companies challenging the tax man over flapjacks, smoothies, cereal bars and Pringles crisps,” it said.